Review: Infamous Players: A Tale of the Movies, the Mob (and Sex) 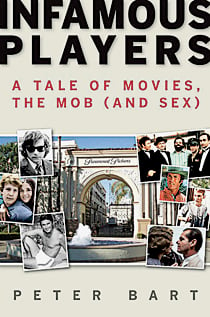 The book doesn’t quite live up to the subtitle. It dishes lots about movies, less about the Mob, not so much about sex. It seems Peter Bart has never shaken his cautious instincts as a New York Times reporter—a career he ditched for a seven-year stretch as an executive at Paramount (1967-75), followed by two decades as editor of Variety. And much of his story has already been told more vividly in The Kid Stays in the Picture, a breathless memoir by his former Paramount boss, Robert Evans. Next to it, Bart’s book seems pretty tame. But with its breezy mix of journalistic detachment and first-hand authority it offers another valuable angle on the rise of the so-called New Hollywood.

Bart’s tenure spanned a fertile period in Paramount’s history, producing such films as The Godfather, Rosemary’s Baby, and Chinatown. But the biggest movie he made happen was the schlockbuster Love Story, starring Ali MacGraw, who became the third of Evans’s seven wives. Bart took far more pride in finessing Harold and Maude, an unlikely romance between a teen boy and a septuagenarian.

Bart coyly skirts around the era’s cocaine and hot-tub culture, comparing himself to “a teenager who’d been invited to an orgy but was too timorous to partake,” though he admits he habitually dabbled. There are some juicy tales of unhinged stars, from Frank Sinatra, whose “moods ran the gamut from rude to homicidal,” to Warren Beatty, who forced Bart to trim Julie Christie’s sex scene with Donald Sutherland in Don’t Look Now. As for the Mob, there are tantalizing glimpses of Evans’s legendary consigliere, Sidney Korshak, “a very civil and well groomed gangster.” (Korshak used his Vegas muscle to pry Al Pacino out of an MGM contract so he could do The Godfather.) Bart quotes Korshak telling him, “I hope you’re not keeping notes. I learned long ago that notes can be dangerous to your health.” Bart took his advice. Too bad.