Review: Kit Carson: The Life of an American Border Man 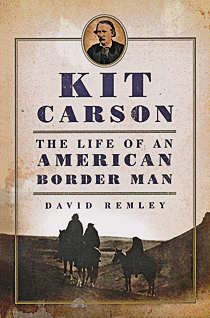 American frontiersman Kit Carson remains a controversial figure. There is, however, one thing historians agree on: it was a bad idea to steal his horse.

During the early years of the American West, nothing was more precious than a good horse, and horse thievery was no trifling matter. Working as a guide in Colorado in 1833, Carson once tracked an Indian who had stolen six horses for 130 miles. “I was under the necessity of killing him,” is how Carson himself explained what happened once he caught up to the miscreant. Carson’s cold-blooded efficiency in administering frontier justice—as well as his participation in various U.S. government actions against native tribes, such as the subjugation of the Navajo in 1864—has brought stern condemnation from many modern historians. The mountain man was a “natural born killer…with a hit man’s sense of aesthetics,” is how one recent biographer put it. Such a grim characterization is a massive change from early perspectives on Carson. In his own lifetime, he was celebrated as the first true hero of the American West in dime novels and equally fictitious press accounts. “Some of those newspaper fellows know a damn sight more about my affairs than I do,” Carson once remarked.

Remly looks to balance the polarity of views. While acknowledging the truth in many of the grisly charges, he argues that Carson must properly be seen as a “border man” living in an unstable region between American and native civilizations. Violence was a matter of survival. Remley convincingly demonstrates Carson was no outlaw. He showed great loyalty to his friends, both native and white, and married an Arapaho woman. And as an Indian agent for the government, he took his duty very seriously, demonstrating a refined sense of morality and fairness. Carson may have killed horse thieves, but he was much more than a killer.