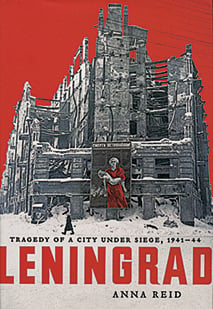 The 900-day encirclement of Leningrad, the cradle of the Russian Revolution, by Nazi armies is one of the most famous events of the Second World War. And one of the least understood, according to Reid’s sweeping and appalling narrative. Just 11 weeks after Hitler’s surprise attack on the U.S.S.R, the Germans were on the city’s doorstep. A fatal mix of factors then came into play: the Soviets’ desperate struggle on other fronts and Stalin’s indifference to the city’s fate on one side; on the other, the strong German preference that Leningrad starve rather than be conquered at any cost in casualties or even surrendered (in the latter case, the Wehrmacht would have been responsible for feeding the inhabitants). By September 1941, the stalemate was complete, and remained in place for 2½ years—Leningrad left to itself, cut off except for a tenuous ice road in the winter months, with the Germans dug in around it. And then the city began to die.

By January the death toll was running at 100,000 a month; by the end of what was a savage winter even by Russian standards, with frequent days of -30° C, the total was already half a million. In later winters, the pace slowed, mostly because there were fewer mouths to feed. In the end, one in three of the population, 750,000 civilians, perished before the Wehrmacht left in January 1944. How they lived and died was long obscured by Communist mythmaking, but with the end of the Soviet Union, elderly blokadniki, as survivors of the blockade are known, rushed their diaries into print. The stories they tell—of moments of bravery and self-sacrifice punctuating a nightmare of an endless quest for food, withered emotions and collapsed family life, looting, murder and cannibalism—are far from heroic, but intensely human. Read’s dispassionate recreation of one of the war’s worst catastrophes is a moving memorial for Leningrad’s victims.