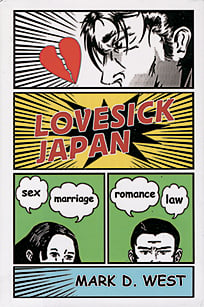 Love and sex in Japan have long exercised a strange fascination over the Western intellect. Consider the strangest fruit in the orchard: a novel, The Apprentice, written by Lewis “Scooter” Libby, set in turn-of-the-century Japan, which contains the sentence: “At age 10 the madam put the child in a cage with a bear trained to couple with young girls so the girls would be frigid and not fall in love with their patrons.” Allowed to go out of print, it enjoyed a brief vogue after Libby, a former Dick Cheney adviser, became embroiled in the Valerie Plame scandal, was disbarred, and went to jail.

Now, in Lovesick Japan, an American law prof parses love, sex and marriage in thousands of Japanese judicial decisions—divorces, sexual assaults, molestations—for an arresting glimpse into Japan’s secret heart. West, who has written widely on Japanese law, argues the rulings betray an underlying assumption among Japanese judges that “physical and emotional intimacy, affection, and interconnectedness in personal relationships” are largely absent between the sexes—even from marriage vows (West reports one bride promised not so much love as to greet her husband “with a smile on my face when he comes home late from drinking, and to moderate my purchases of brand-name handbags”).

Could it be otherwise? A 2006 government survey found half of Japanese men and women had no relationships of any kind with members of the opposite sex, not even friendships. Many men pay for their first sexual experiences. An astounding number of both men and women remain virgins into their 30s (how-to books for late starters advise men to clip their fingernails before the act). Where love does surface, it’s seen by judges as “an overwhelming, disorienting force to which people unwittingly cede self-control.” Judges therefore view marriage as necessarily loveless, and conjugal sex (when it happens at all) as largely procreative.

Throughout, West presents a judiciary not too abashed to delve into the details. “Japanese courts have no problem waltzing into bedrooms and brothels in ways not essential to deciding the case at hand,” he writes, though West, too, occasionally suffers from the same prurience. A fascinating book, but be prepared to feel dirty.