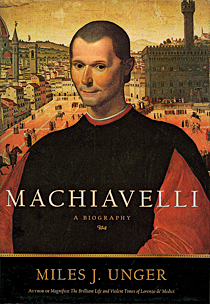 The man whose 1513 work The Prince stands as the foundational document of Western political science has ever since been excoriated for his worship of raw power or praised for his grasp of realpolitik. Mostly the former, of course: as an adjective, “Machiavellian” is always a pejorative. That’s a reputation Unger sets out to demolish in his lively recap of the Florentine thinker and his tumultuous times. He only partially succeeds—Niccolò Machiavelli did possess the intellectual’s fatal attraction to men of action—but the attempt still offers an intriguing portrait of a man marked more by his fervent love for his artistically dazzling city-state than by his political cynicism.

Born in 1469, Machiavelli learned by doing. As a senior civil servant for the Florentine republic between 1498 and 1512, he went on high-level diplomatic missions, oversaw the city’s militia, and watched with fascination the rise and fall of empire-building Cesare Borgia. When, as an envoy from the republic, Machiavelli met the great man in 1502, his admiration for Borgia came through in his dispatches home. “This Lord is of such splendid and magnificent bearing…he never rests, nor does he know weariness or fear.”

Borgia conquered and ruled cruelly, but effectively. In an era of constant war and failed states, the Borgia territories were spared the random killings, rapes and pillage that racked so many other Italian regions. The republic of Florence, on the other hand, often seemed to its exasperated servant to specialize in half-measures, harsh and, worse, unpredictable enough to enrage subjects and allies, but not harsh enough to keep them in line. Machiavelli soon developed a preference for order over anarchy, however it was achieved. In the end his patriotism outweighed his republican sympathies. Feeling forced to choose between Florence’s twin freedoms—the rudimentary rights a republic offered its citizens, and the city’s own liberty from foreign control—Machiavelli opted for Florence above the Florentines.