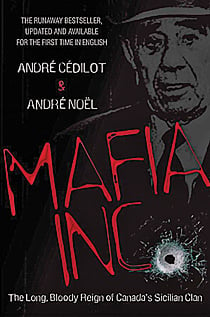 As with its actors and professional football players, Canada’s Mafia families were long considered to be little more than farm teams for their many big brothers to the south. Montreal journalists André Cédilot and André Noël turn this notion on its ear to show that, perversely, this country’s organized crime underworld is arguably deeper, darker and more violent than the goings-on in New York’s five boroughs or elsewhere.

Cédilot and Noël, veteran crime reporters for La Presse, spin an exhaustive and compelling read. Much like the mob itself, Mafia Inc.’s narrative tendrils are long and widespread, and converge on an imposing subject: Montreal’s Rizzuto clan. Hailing from Sicily, Nick Rizzuto arrived in Montreal and in short order usurped the Cotroni clan to become patriarch of the country’s most important crime family. His son Vito, who helped cement the deal with bullets pumped into the bodies of rivals, eventually took over.

For whatever reason—luck of the devil, the RCMP’s zealous ineptitude, or what Cédilot and Noël call “Canadian judicial authorities’ incomprehensible indolence” toward the mob—Vito stayed out of jail, and his decades-long reign expanded the family’s influence to New York, Italy and beyond. The book is larded with keen details. For example: who knew that the Lebanese civil war was the reason why Montreal organized crime moved from hashish to cocaine, or that leaders of Quebec’s biker gangs had a childlike adoration of Montreal’s Mafia types?

The genius of Mafia Inc. is its all-important connections between organized crime, legitimate business and government. The chapter on the alleged cozy relationship between former Liberal minister Alfonso Gagliano and the Rizzuto clan (Gagliano denies any Mafia ties) is alone worth the price of admission. And the authors show how the Rizzutos, like any big and violent Mafia clan worth its salt, were crippled much as they started: with hubris and a hail of bullets.