REVIEW: Paradise Lust: Searching for the Garden of Eden 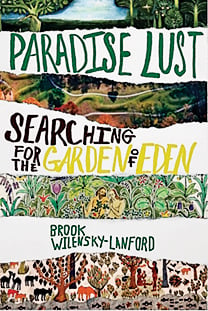 This charming exploration of the enduring place in the Western imagination held by the story of our Edenic origins is all about the searchers, not the search. To that end, it opens with an eye-popping world map of the many and varied places enthusiasts have located the Biblical garden. The Iraqi desert, in the ancient Middle East, sure—Genesis does say that two of the four rivers surrounding Eden were the Tigris and Euphrates. But a Sri Lankan mountain, along a Venezuelan river, Serpent Mound in Ohio, the North Pole?

In fact, as the author makes clear, the more religiously orthodox an Eden devotee was, the more likely he was to consider the garden a mystical place or, if a real-world site, to necessarily have been located close to Iraq’s two famed rivers. It was only after Darwin and modern archaeology began to undermine the idea of literal Biblical truth that the true wild-eyed Eden seekers emerged. Most were determined, at least at first, to bridge the increasing chasm between faith and reason.

Take William Warren, president of Boston University from 1873 to 1903, both a Methodist minister and a champion of science. Well aware that the entire planet was once much warmer than it is now, Warren was also enthralled by electricity and, even more so, by the aurora borealis, which featured frequently in explorers’ accounts in his polar-obsessed era and which he believed was imbued with life-giving energy. Ergo, what could be more self-evident than Eden’s true location at the North Pole, where the ice now hides evidence of God’s creation of man through some kind of electrical action?

Persuasive for contemporaries—his book, Paradise Found!, raced through eight printings—and a nutcase for us, Warren actually looks like a Nobel candidate when compared to some of his 20th-century successors. They, having finally abandoned the God part of the quest, often replace him with space aliens as Eden’s founders. Whether religious or secular, Eden—humanity’s mythic starting point and the paradise lost to our own corruption—clearly haunts us still.