REVIEW: Sex, Mom, and God: How the Bible's Strange Take on Sex Led to Crazy Politics—and How I Learned to Love Women (and Jesus) Anyway 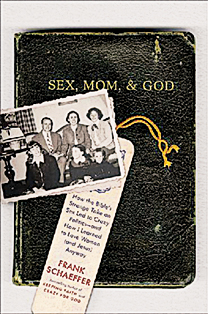 Former evangelist Frank Schaeffer may have quit the business and turned his back on what he now calls “our dreadful, vengeful little God,” but the man clearly still has a knack for sermon titles. And Sex, Mom, and God is nothing if not a righteous, furious, cringe-inducing and surprisingly nuanced sermon delivered in book form against Schaeffer’s heavenly demons. Schaeffer knows the evangelical world well; his father Francis Schaeffer was also a father to America’s evangelical right who oversaw its post-Roe vs. Wade politicization. Frank followed in his father’s footsteps—he helped produce Ronald Reagan’s 1984 anti-abortion book—before an abrupt, late ’80s volte-face that, in many respects, he’s still trying to explain.

Saving him from all of this is Edith, Frank’s beloved mother, at once a lingerie-wearing, Bob Dylan-quoting free spirit and an unalloyed proselytizer of her husband’s fire and brimstone—“a much nicer person than her God,” as Schaeffer writes. Schaeffer loves his mother too much to call her a hypocrite, but it is difficult to otherwise imagine this ebullient mother who loved life and high fashion in practically equal measure was also responsible for such subservient tracts as The Hidden Art of Homemaking. (Like her son, Edith had second thoughts.) Schaeffer’s contention that most, if not all, of organized religion’s shortcomings stem from hang-ups over sex is nothing new. What’s compelling about Sex is Schaeffer himself, who bashes away at what he held dear for so long.