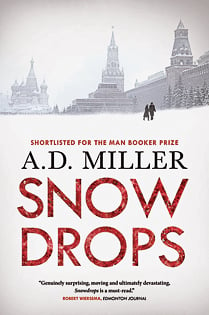 Another wickedly cold Moscow winter looms, and Nick Platt, the 38-year-old British expat lawyer and narrator of Snowdrops, has stepped onto a slippery slope. He has fallen for a tawny-haired twentysomething named Masha, even as he realizes that everything about his new girlfriend is as false as her fake Burberry purse. At work, the oil boom of the early ’00s has been great for business: Nick and his colleagues, eager for the fat bonuses they’ll get if they don’t ask too many questions, are pushing through a lucrative deal involving Western banks and the ex-KGB goons at the state energy company.

None of what we’ve seen and read of Russian mobsters and endemic corruption approaches the moral stink depicted in Snowdrops (“snowdrops” being the corpses of the homeless and murdered who get buried in the snow, revealing themselves during the spring thaw). Nick feels above the cheapness, brutality and nastiness of Moscow life but avails himself of its many seamy pleasures. He believes he’s better than the thugs who drink vodka from bottles shaped like Kalashnikovs, the cheating functionaries, the drink-soaked cabbies, the desperate girls whose lap dances he buys. He’s wrong, of course.

Among the many attractions of this enormously assured first novel, which is shortlisted for the Man Booker Prize, is that it shows the capacity of such a terrible environment to enchant. Miller was The Economist’s Moscow correspondent from 2004 to 2007, when oil and crime, both organized and disorganized, made a few individuals stupendously wealthy, and he writes with the authority of someone who lived through those years.

It’s a short novel, a novella really, that probably wouldn’t last a flight from Canada to Moscow. A word of advice: don’t go in winter.