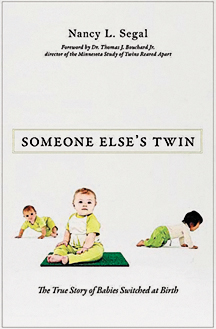 Ten years ago, in Spain’s Canary Islands, 28-year-old Begoña was browsing in a clothing store at the mall when a shop assistant approached and offered a friendly hello. Begoña had no idea who the assistant was, and left without returning her greeting. In fact, the assistant had confused Begoña with another girl, named Delia, who—unbeknownst to any of them—was Begoña’s long-lost identical twin, and lived in another town on the island. Begoña had a non-identical twin sister, named Beatriz, but she’d soon find out they weren’t related by blood at all. Due to a hospital mix-up, Beatriz and Delia had been switched at birth.

Psychology professor Nancy L. Segal (who founded the Twin Studies Center at California State University, Fullerton) examines several cases like this. In Ottawa in 1971, three boys—identical twins George and Brent, and another named Marcus—were placed with the same foster family by the Children’s Aid Society of Ottawa. Somehow their records got mixed up; when the twins’ parents reclaimed their kids, they ended up taking George and Marcus home. The twins finally met in 1992, when they were both members of Carleton University’s strategy club, for fans of board games, cards and chess.

Segal, who is a fraternal twin herself, brings remarkable insight to these and other cases. Even twins raised apart, it turns out, feel a strange connection when they finally meet again—although the shock of reunion can have a devastating impact not only on them, but on friends and family, too. Cases like the ones mentioned above are extremely rare, but they do happen: according to U.S. estimates cited in Segal’s book, 20,000 accidental baby switches could happen every year in that country alone. Thanks partly to advances in baby monitoring, most switches get corrected in the hospital. Even for twins who are raised apart, like George and Brent, or Begoña and Delia, Segal shows that the bond can run surprisingly deep.