REVIEW: The Keeper of Lost Causes 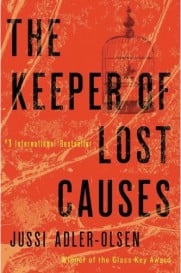 Judging from the bestseller lists of late, the appetite for Scandinavian crime fiction shows no signs of abating. Three years after his Millennium trilogy unfurled its first volume, Stieg Larsson still sells a few thousand copies a week; Jo Nesbo keeps building on past successes, and Lars Kepler’s The Hypnotist made a major splash upon its release last month.

Inevitably, readers want to know what they should read next, and for those looking for a fast-paced tale mixing arch comedy with stomach-twisting suspense, this novel from Denmark’s Jussi Adler-Olsen admirably fits the bill. It introduces a new series featuring Copenhagen homicide detective Carl Mørck, who, like his fellow Scandinavian police brethren Harry Hole and Kurt Wallander, isn’t one for sticking to the rules. He’s as guilt-ridden as they are, thanks to a case that nearly killed him (two colleagues weren’t so lucky).

He’s “punished” to run Department Q, a special investigations unit built out of funds his bosses needed to use or lose, and tasked with a seemingly dead-end missing persons case. And, as Mørck learns, just a little behind the reader, this simple case is anything but. In the process, Adler-Olsen educates us on the horrifying depths of human behaviour, the immutable laws of physics and the importance of refusing to give up—both on living and on a going-nowhere investigation.

Adler-Olsen is no stylist, and The Keeper of Lost Causes sets the thrill dial high and frequently goes over the top. Mørck’s sidekick is curiously named Hafez El-Assad, after the Syrian dictator, for no discernible reason. But the author’s exuberant voice, attention to detail and creation of a protagonist who invokes but doesn’t suffer from cliché (Mørck’s complicated relationship with his estranged wife is a highlight) make us want to read more—and by doing so, Adler-Olsen succeeds in a very big way.