REVIEW: The Lives of Conn Smythe 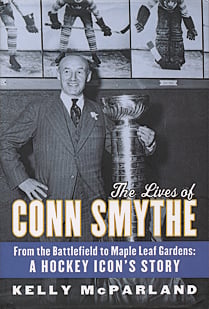 Forgive fans of the Toronto Maple Leafs a longing glance back at their founding father, who brought home eight Stanley Cups over 34 years as owner and sometime manager of the fabled hockey club. Conn Smythe’s ideal players were “hard-nosed warriors, as skilled with their elbows as they were with the puck,” writes author McParland. While current management pays lip service to this creed, the paucity of parades down Yonge Street leads one to wonder: what did Smythe have that today’s bunch lacks?

Determination, it would seem, and fear. The humiliating poverty of Smythe’s childhood manifested itself in relentless ambition and an insecurity he never quite shook. His iron-fisted rule of the Leafs was rooted partly in his paranoid sense that others were plotting to push him out of the organization, and he was not the sort of man to go quietly. Such qualities made him a champion, McParland notes, and an awfully hard man to work with.

Smythe rose above his flaws, however, and not just in hockey. He forged ahead with the construction of Maple Leaf Gardens during the height of the Great Depression, bequeathing to Toronto a civic landmark, while bringing well-paying jobs when the city most needed them. A decade later, he almost single-handedly shamed the King government into sending properly trained and equipped soldiers overseas during the liberation of Europe in 1945—activism for which McParland accords overdue credit.

As for his success as a hockey executive, well, that’s harder to explain. Like many of the best, Smythe was guided by mysterious instincts about players (he spoke often of “bloodlines,” though he really meant character). Yet his intuition yielded the greatest NHL franchise of the 1930s and ’40s, featuring icons like King Clancy, Busher Jackson and Turk Broda. And while he’d have been lost in today’s world of salary caps and $100-million contracts, only a fool would bet against him for long were he in charge of today’s Leafs. If McParland’s entertaining and thorough account is any guide, Smythe wouldn’t have quit working until he found a way to win.

FILED UNDER: Kelly McParland The Lives of Conn Smythe