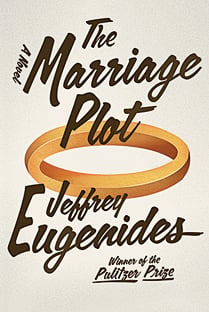 If the student essay title “The Interrogative Mood: Marriage Proposals and the (Strictly Limited) Sphere of the Feminine” summons a smile and an eye roll (especially the parenthetical part), then Eugenides’s new novel will likely strike a major chord. This baby Bildungsroman traces three characters who meet in the 1980s as students at Brown University: the lovely, rudderless Madeleine Hanna, author of the aforementioned essay; her friend, Mitchell Grammaticus, a twitchy, brilliant religious studies student who believes he and Madeleine are fated to be together; and Leonard Bankhead, the charming, hyper-articulate, manic-depressive lost boy who captures Madeleine’s heart.

Eugenides’s skill depicting disparate worlds with pitch-perfect authenticity and wit is in full force. The former Brown alum captures student life against a backdrop of Talking Heads, impassioned arguments about Jacques Derrida, getting drunk and agonizing over the next big step. They all venture into thorny terrain—Madeleine and Leonard’s stormy marriage, a lithium-doped Leonard exploring the wondrous, complex mating habits of yeast in the lab of Woods Hole Oceanographic Institution, and Mitchell wandering the world and landing for a time at Mother Teresa’s home for the dying in Calcutta.

It’s a patchwork, and reads like one at times. Eugenides teases out big ideas like a cat with yarn. Early on, one of the characters makes the observation that all books are about other books, a truism believed ardently by students. It’s definitely true here: the novel’s title itself is derived from a literary term describing 18th- and 19th-century novels focused on complications of courtship that end with the nuptial payoff, once the focus of Madeleine’s research. Eugenides’s bold attempt to reframe the “marriage plot” for the 21st century may not succeed fully, but it’s only a minor failure. He has created an absorbing universe of a book—so much so readers will turn the last page still hoping for more.