Review: The secret knowledge: On the dismantling of American culture 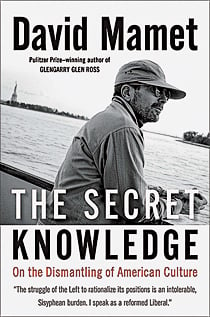 Mamet (Glengarry Glen Ross) has written what amounts to a high-class version of Fox News. Most of the author’s points in his first political book, where he explains how he discovered “the great wickedness of liberalism,” aren’t particularly new. But his formal, quasi-Talmudic writing style (“The written law proceeds from the unwritten law”) gives a new slant to the expected denunciation of liberals and feminists. And in typical Mamet fashion, he sometimes conflates his new political views with the machismo familiar from his plays and screenplays; when he argues for traditional gender roles by saying “boys are born to contest with the world,” he sounds like a David Mamet character.

What Mamet doesn’t really explain is how he came to believe that global warming is a made-up “story known of old as the history of Chicken Little,” or that “America is a Christian country.” The closest he comes is in the acknowledgements, where he thanks his friends (including actor Jon Voight) for introducing him to conservative books and radio talkers like Glenn Beck. Like the thinkers and personalities he’s discovered, the book seethes with rage against an amorphous enemy called “the Left.” When Mamet writes, “the Left’s savage animus against Sarah Palin is attributable to her status not as a woman, neither as a Conservative, but as a Worker,” it seems less a revelation and more a rehash of something Rush Limbaugh says every day.

That means Mamet has abandoned his dramatist’s ability to see both sides; the villains in one of his plays would get more of a fair hearing than he gives to liberals, whom he now accuses of “the destruction of our culture.” Though he says that a liberal is one who “never talks to anyone outside of this group,” the book unwittingly tells a similar story: a man who believes whatever his current friends believe.