Review: Ticket Masters: The Rise of the Concert Industry and How the Public Got Scalped 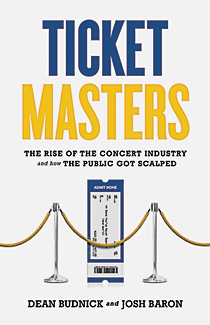 In theory, making money off a rock concert should be relatively simple. The promoter hires the band, secures the venue and charges an admission price sufficient to cover the costs, plus a profit. But, as Dean Budnick and Josh Baron explain, the live entertainment business has evolved to become a particularly complicated beast. And in most cases, it’s the fans who pay the price. The two trace the rise of industry behemoth Ticketmaster, which last year merged with concert promoter Live Nation, further tightening its grip on the industry. The story is one of big ideas, big business deals and near-constant push-back from bands, concertgoers and anti-trust regulators.

The authors, who also edit the music magazine Relix, itself spawned by a Grateful Dead newsletter, clearly know their subject matter—so much so that the well-researched book sometimes feels like it was written for a music industry audience. But the casual reader is nevertheless rewarded with gripping accounts of Ticketmaster’s showdowns with bands like the Dead, which launched their own ticketing service for their devoted fan base, and Pearl Jam and String Cheese Incident, both of which accused the company of behaving like a monopoly. Dozens of other big names pop up throughout, resulting in a fascinating insider’s portrait of the music business once all of the pulsing lights, fog machines and sound equipment have been turned off.

But perhaps the biggest revelation is the sheer complexity of the business model. Pearl Jam, for example, wanted cheap tickets for its fans, but was frustrated to learn it had no control over the extra fees, where all of Ticketmaster’s profits are made. The authors also explain why thousands of $50 concert tickets can sell out in less than a minute only to appear, frustratingly, a short time later for hundreds of dollars more on websites like StubHub, or in the hands of brokers or yelping scalpers. In its quest for profits, they argue the industry has too often taken its most important stakeholders—the fans—for granted, which hardly seems like a recipe for long-term success.