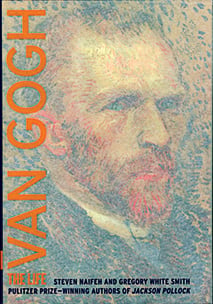 In the modern Western imagination, Vincent Van Gogh is the very embodiment of the tortured artistic genius, able to express that genius—in his case, on canvases that are now among the best-loved artworks in the world—precisely because he was tortured, a man who eventually died young (only 37) by his own hand (of course). All very tragic, if undeniably romantic. And all profoundly mistaken, according to Naifeh and Smith, authors of the Pulitzer Prize-winning biography Jackson Pollack, about another volatile painter who died young. The truth, in fact, is far more authentically tragic. Van Gogh was enormously productive and incandescent with inspiration when he was feeling well, and unable to take up his brush during his bouts of mental illness. With a final blow to the mythic Van Gogh, the authors argue he didn’t even kill himself, but fell victim to a couple of boys with a misfiring revolver.

Naifeh and Smith are persuasive in that conclusion, as they are in everything else in this magisterial biography. Writing with the co-operation of the Van Gogh Museum in Amsterdam, they didn’t have just the beautifully written letters exchanged by Vincent and his beloved brother Theo, but also previously unpublished family correspondence. The man who emerges is not someone most people would enjoy having for a relative. (Theo was a long-suffering brother.) Vincent was as dedicated to violent quarrels as he was to investigating the surprises provided by his own troubled psyche. Yet he had courage and integrity that is humbling to encounter.

After the death of his father in 1885, Van Gogh lost his religious faith, a loss with which he never really came to terms, according to Naifeh and Smith. As Van Gogh himself wrote, only art was left: “Illusions may fade, but the sublime remains. My aim in life is to make pictures and drawings, as many and as well as I can, and then passing away thinking, ‘Oh, the pictures I might have made!’ ” In Vincent Van Gogh’s heartbreaking story, there’s really nothing more to add.