REVIEW: Darwin's devices: what evolving robots can teach us about the history of life and the future of technology 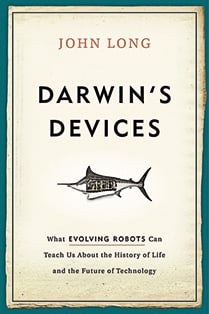 Why are blue marlin faster than tuna? This innocuous question sets Vassar College biologist Long off on a meandering investigation through evolution, robotics and, eventually, the future of warfare.

Long’s observations on the differing swimming speeds of marlin and tuna lead him to wonder how the characteristics of a species’ spinal column could affect their evolutionary prospects. Unfortunately, questions about evolution are easier to come by than answers: a single scientist is rarely able to compile enough data over a lifetime to make conclusive pronouncements. Long decides to speed up this process using robots.

Picking a species of tadpole larvae as their test subjects, Long and his research team construct a series of swimming machines called Tadros. These simple mechanical beings look like floating plastic pots with tails; a photo sensor and some circuitry directs the tail to swim toward light—behaviour that is meant to mimic the search for food. The scientists vary the characteristics of the Tadros’ tail and award points based on the ability to swim efficiently and move quickly toward a food source.

Calculations about the first generation allows the scientists to select the fittest Tadros. These characteristics are then “bred” into subsequent generations constructed in the lab. And so on. After several generations, Long figures the results should reveal the impact of evolution on spine length and stiffness. For added realism, predators are later added to the mix. Things are rarely simple or easy in Long’s quest, but he eventually comes to some intriguing conclusions about the efficacy of robotic discovery, and how the military could incorporate robots into the business of war. (His research is partly funded by the U.S. Navy.)

Long’s trials, errors and successes should prove enlightening to anyone interested in evolution or the future of robotics. Casual readers should be warned, however. The discussion can get quite technical (be prepared for terms such as cycloptic helical klinotaxis) and Long’s determination to name every colleague or grad student who ever helped slows down the narrative.

FILED UNDER: book review Darwin's devices: what evolving robots can teach us about the history of life and the future of technology John Long