REVIEWS: The Translation of the Bones 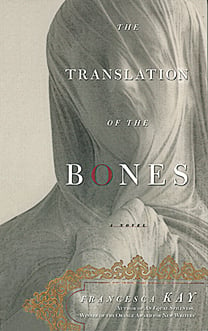 In certain circles, there’s a gaudy fascination with miracles of the Virgin-Mary-on-a-tortilla variety, which might make you hesitate before picking up Kay’s second novel; it begins with a bleeding statue of Christ. But it’s not that kind of story. The incident is mostly forgotten (the question of the miracle’s validity is barely explored), but it sets off a chain of events that ends in a mother’s nightmare.

A church in south London connects the novel’s characters to each other. Simple-minded Mary-Margaret dutifully dusts the church every week. As she gives the statue an extra going-over for Easter, she tumbles from a ladder and believes she has seen His painted blood liquefy. Stella takes care of the church’s flowers, and is the elegant wife of an MP, yearning for her youngest son, away at boarding school. Father Diamond, who is struggling with an eroded faith, tries to contain the fuss over the miracle with the fervour of a man about to be busted by his boss. Fidelma, Mary-Margaret’s mother, doesn’t leave their apartment. She lives in the memory of a brief affair in her native Ireland, and does not see the trouble her daughter is in. The dark climax of the novel comes as Mary-Margaret realizes her mother isn’t technically a widow, and is compelled to wash the sin from their lives with a sacrifice.

Kay won the Orange Award for New Writers for her first novel, An Equal Stillness. Her writing is so rich, you nearly worry for your waistline. But the richness isn’t vanity, and her characters’ daydreams (while cleaning mussels or watching soldiers buying round-trip train tickets) are particularly lovely. Her description of a child’s rugby match nearly breaks your heart. And just as the bleeding statue is never explained, Kay doesn’t try to offer much that’s new on the rationality of faith, its role in grief, and God’s protection (or lack thereof), although she reminds us that, believers or otherwise, we are all united in our longing for answers.

FILED UNDER: Francesca Kay Translation of the Bones