Rip-offs and break-downs on the Trans-Canada Trek

NOW: (Nanaimo) The ferry from Vancouver’s Horseshoe Bay to Nanaimo on Vancouver Island is officially part of the Trans-Canada Highway, linking the mainland road with the island road down to Victoria.

The arrangement is the same in the Maritimes, where the Newfoundland ferry at Port aux Basques and the PEI ferry at Wood Islands are both considered an integral part of the highway. 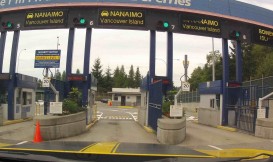 At the ferry kiosk

Everyone told me to book the ferry ride long in advance, because this is a holiday weekend, so I did and paid a deposit of $15. When I rolled up today, there wasn’t much traffic and the cashier asked me straight away for $80.70 for the ticket – a car and two people.

“I’ve already made a reservation and paid a $15 deposit,” I told him, expecting him to knock down the figure by 15 bucks.

So I spent $15 to make everyone’s lives easier – mine and the ferry organizers. But why? What’s the justification? What costs $15 here? Nothing, that’s what. I think it’s a complete ripoff to be charged $15 to hold a ticket, which goes back to standby anyway if you don’t turn up within 30 minutes of sailing. Even TicketMaster’s online concert reservations are cheaper – $10 for the privilege of printing your own ticket – and I think that’s also a ripoff.

The Trans-Canada Highway on the move

People have been asking me about the justification on the Trans-Canada Highway for tolls, as with the Cobequid Pass section in Nova Scotia and the Confederation Bridge and ferries, and I’ve been answering that these are costly services that have to be somehow paid for. However, an additional $15 every time for buying your ticket in advance is unconscionable. If anybody at BC Ferries can justify the cost in any way whatsoever, please leave a comment below.

Incidently, the line up for the ferry at Nanaimo back to the mainland was hugely long – anyone without a reservation was out of luck. So why the additional charge to drivers for helping everything run smoothly?

THEN: (Port Alberni) This was the original westernmost point of the Trans-Canada Highway, back in 1912 when a group of motorists drove here from Victoria, Nanaimo and Vancouver. The Malahat Highway from Victoria had just been opened and this was as far west as anyone could drive in Canada.

Speeches were made then by various politicians and auto enthusiasts, and a highway was called for that would link the country by road instead of just rail. There were only 50,000 licensed cars in Canada, but the number was growing rapidly and the motorists could see the future.

On that day, May 4, a signpost was constructed and planted at the end of the road in Alberni; it read simply “CANADIAN HIGHWAY” and an arrow pointed east, back down the road. Some of those in attendance, including Albert Todd, the creator of the Todd Medal that I’m carrying, predicted that the Trans-Canada would be complete within five years or so.

But there was to be controversy within just a couple of days. Residents of the rival neighbouring town of Port Alberni stole the sign and replanted it within their own city limits a couple of kilometres away. Not to be outdone, the Alberni residents promptly stole it back again.

And as Thomas Wilby described in A Motor Tour Through Canada, when he and Jack Haney arrived in Alberni in the final days of their journey: “The treasured post was tenderly restored to its rightful place on the inlet, and a bull terrier, fierce and aggressive of disposition and sharing the local indignation, was chained to it to keep watch and ward over the outward symbol of a road that is yet to ‘weave province with province, to interlace people with people.’”

Today, the long-amalgamated town of Port Alberni is more than an hour’s drive north-west from the Trans-Canada, which leads between Nanaimo and the terminus in Victoria. But it has a special place in the highway’s history nonetheless.

SOMETHING DIFFERENT: (New Westminster) After meeting Lorne and Peter Findlay on Friday, I was invited to join them for the annual meet of the antique chapter of the Vintage Car Club of Canada. “There’s room in my 1911 Cadillac,” said Peter, so how could I refuse? 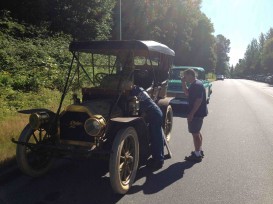 I set off first with Paul Carter in his 1908 Cadillac, because he was on his own and I was to be his navigator, reading out the turn-by-turn directions for the 30-kilometre route. “My brakes aren’t very good, but I go slowly and the parking brake’s okay,” he said, none too reassuringly. There were no seat belts – at least half a century would pass before anybody even thought of them – and not even any electrics. If this Cadillac was The Standard of the World it claimed to be, the standard wasn’t very high back then.

Paul gave a hard turn of the hand crank, the engine fired without too much protest, and we putted off up the road. But something didn’t sound right. Every shift between the three gears clanged and banged and ground away, and Paul didn’t look very happy. Then after about eight kilometres, while coming down a hill and distracted by the horrible noises coming from beneath our feet, the brakes failed and we bumped into a Ford Model T truck that was stopped at a junction. Impact speed was perhaps 1 km/h but even so – Paul uttered a few timeless epithets and I hitched a ride with Steve Eremenko in his ’57 GMC truck while the Cadillac gave up on the day and headed for the garage at home. 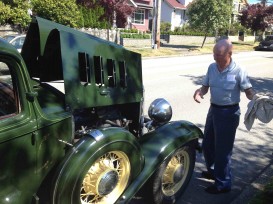 Steve and I covered another eight kilometres before we pulled up behind Lorne Findlay, who was looking under the hood of the 1932 REO sedan he’d brought along for the day. It had just coasted to a halt and Lorne, a retired mechanic, diagnosed a vapour lock in the gas line caused by excess heat. It was a very hot morning and he’d forgotten to open the ventilating louvres on the hood. “I should have brought the ’12 REO,” he lamented. “It’s gravity fed – the fuel line would have been fine.” It took 15 minutes of draining gas and blowing into the line to push the fuel through before the engine finally caught and we carried on to the finish.

After ice cream floats, everyone headed home and I hitched a lift with Peter Findlay back to his house, where the Camaro was parked. Five of us set out in his ’11 Cadillac; only two arrived. After – you guessed it – about eight kilometres, the car just ran out of power on a steep hill and ground to a halt beside the road.

Peter jumped out and cranked for all he was worth in the hot sun, sweating and straining as we all watched from the cool shade, but the engine wouldn’t catch; we were parked uphill and it was too dangerous to turn it around for a push start. With great regret, Peter suggested that the three of us who had other engagements would do better to just walk over the hill for the final kilometre back to his home. 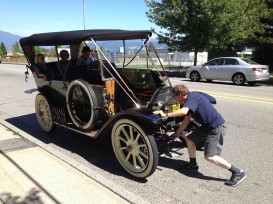 “This isn’t the way I wanted it to end, but sometimes it just can’t be helped,” he said as we shook hands to say goodbye. As I walked away, an elderly woman walked up to him on the sidewalk and grasped his arm. “I used to drive in a car just like this!” she cooed. “I wish I still had it.”

Later that day, he sent me an e-mail. “Yes, I made home on my own power,” he wrote. “Cliff and I sat there for what seemed like ages (basically entertaining the passersby with their cameras).  Eventually I remembered that I had a gallon of gas in the back, so I dumped that in and managed to get it running again.  I guess it was low on fuel for hauling five people up the hill, but it should have been ok. The heat didn’t help. Anyhow, I got it home and stuck it in the garage and I’ll try it in the morning when I have more energy and both of us are a little cooler.

“After today, I hope you have a better understanding/appreciation of what the early travelers were up against. I still marvel at the thought that we were able to do 5,000 miles in Dad’s REO with virtually no problems.

SOMETHING FROM TRISTAN, 12 (West Vancouver) Yesterday I attended the West 49 Lrn2sk8 (learn to skate) program. Aside from the fact it was really hot, it was great because I learned how to drop in off a ramp. 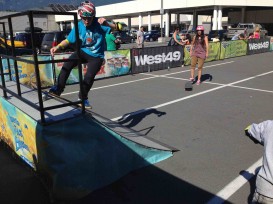 I also was given a Sunny D and a prize pack with lots of stickers, a bobble head, and a poster to put on my wall. I also ended up buying a hat because if you attend the program you get a wristband that gives you 20 per cent off everything in the store for the rest of the day.

Skateboarding is really starting to get fun now that I have my new board and I can actually do some of the tricks. Hopefully I’ll get even better.