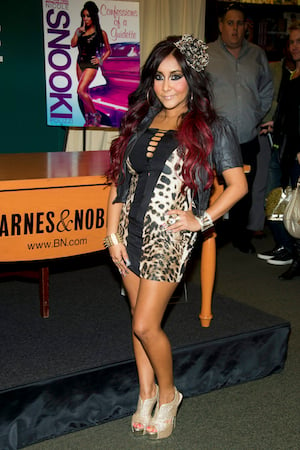 Nicole "Snookie" Polizzi attends a book signing for "Confessions of a Guidette" in New York on Oct. 25, 2011. (Charles Sykes/AP)

Jersey Shore reality television star Snookie has some advice for Kate, the duchess of Cambridge, upon hearing the news that she and Prince William are expecting their first child.

Snookie, who was once known for her hard drinking and partying ways on reality television, gave birth to baby boy Lorenzo Dominic LaValle in August.

Should Kate wish to take advice from the woman known for her hair poof and affinity for leopard print, Snookie also says Kate should get a Boppy pillow for breastfeeding and she should: “Enjoy your time at home — or the castle, in her case — with the baby. Especially the first few months.”

Snookie also had congratulations for the Royal couple: “Congrats to Will and Kate. I’m sure she will be an amazing mom.”

On Tuesday, Kate remains in hospital where she was admitted Monday with severe morning sickness. She is expected to remain in hospital for several days and her public appointments have been cancelled.