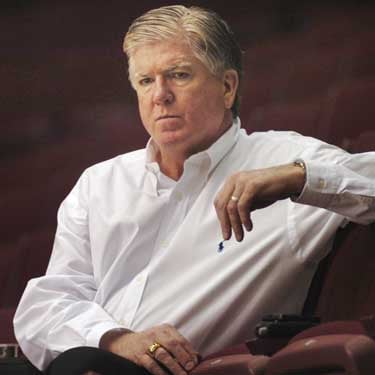 Hey, how did this YYZ tag get on my bag?

The Anaheim Ducks have “fired” Brian Burke as GM. Or they couldn’t agree on a contract extension with him. Or something. What a shock!

Weren’t the Ducks one of the putative powerhouses of the West, bolstered by the presence of last-minute signee Teemu Selanne and the timely salary dump of Mathieu Schneider? That’s, like, good managing right? Weren’t they 6-3-0-1 in their last 10? Weren’t they the team that won the Stanley Cup season ‘for last, looking well nigh invincible in the process? Weren’t they the team with whom Burke claimed he was oh-so-eager to negotiate a new contract?

If you didn’t know better, you’d almost think there was some other team in the picture … some dastardly, deep-pocketed franchise that for some reason views Burke as the solution to its persistent mediocrity.

We emphasize the “for some reason” part.