The Bloc, its leader, and their subsidies 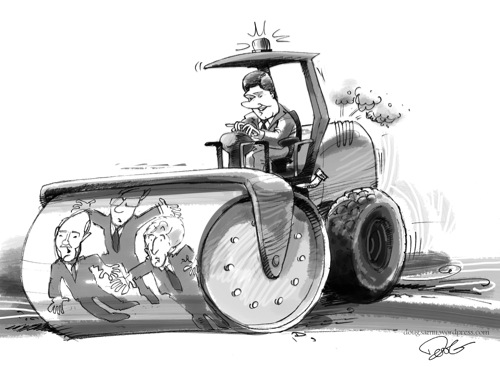 1) Turns out those rumours Gilles Duceppe was planning on stepping down tomorrow weren’t true after all. How do you mend a broken (Conservative) heart?

You have to admire Stark’s honesty in framing his proposal as an explicit attack on the Bloc: “As long as the Bloc Québécois holds a lock on 40 to 50 seats in Parliament, neither of the two main political parties will have an easy time winning a majority.” Fittingly, Stark’s plan would cripple the Bloc’s finances while leaving the other parties’ perfectly intact.

This week, the Conservative Minister for Democratic Reform, Steven Fletcher, tells The Hill Times he agrees with Stark. Fletcher would, in fact, go further and shutter the program entirely, as the Conservatives tried to do late last year.

I’m a little surprised at how quickly the idea of a government kneecapping one or all of the opposition parties by changing their funding model has gone from being unpalatable partisan trickery to respectable policy. Even though putting the idea forward last November almost cost them their government, whatever the Conservatives have done since then to keep it afloat appears to have worked as well as they could have hoped. Sure, Duceppe has since shot back at Fletcher. But the usual suspects—including the types who get embarrassingly excited about a “scandal” involving a wafer—haven’t said much about either Stark’s or Fletcher’s plans.

Is everyone just resigned to the idea the subsidies are doomed?