The FSQ and turbans: In life, as in soccer, truth is best 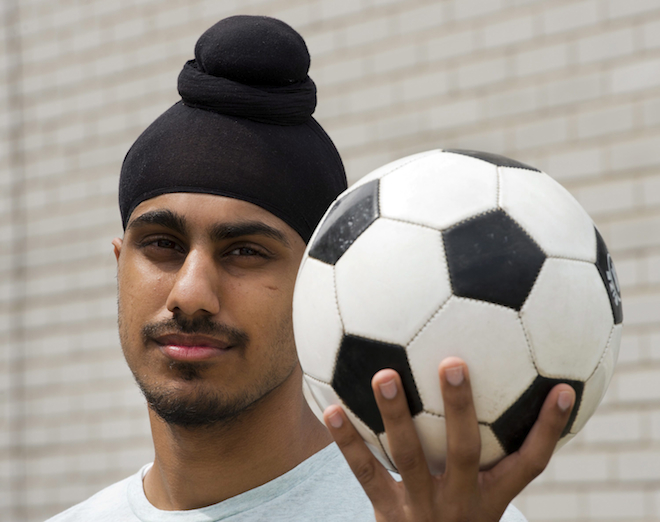 If only there were scads of Sikh kids injuring themselves and/or others with the thin piece of cotton and string attached to their heads. If only one player had injured himself by, say, having his balance thrown off or his depth perception skewed by his religious (and not perspiration-related) headgear. If only turbans bit opposing players, or scored goals on their own net, or deflated soccer balls on contact.

Were this the case, you’d be reading a different column. You’d hear how we need to eliminate the turban scourge from the game, so bless the Fédération de soccer du Québec for taking the initiative. Better to nip it in the bud before a turban tears a chunk out of an opposing player’s thigh.

Instead, you are going to read how the FSQ decision to ban turbans is the height of cowardice. It’s okay to take issue with religious emblems in sport, and it is a worthy and brave organization that says anything of the sort has no place on the pitch. But in banning the turban for vague, completely unsubstantiated reasons of “safety,” the FSQ attempted to tread into fraught religious waters without getting wet.

For the record, turbans aren’t dangerous. A kirpan? Yes, which is why FIFA bans such things. (“A player must not use equipment or wear anything that is dangerous to himself or another player.”) Players can wear turbans for the same reason they can drink green Gatorade or flaunt their tattoos: doing so isn’t against the rules.

Let’s call the FSQ ban what it is: a continuation of the ongoing and seemingly endless debate over religion’s place in Quebec society. It is a worthwhile debate to be had, and the FSQ would have gone a long way by simply saying soccer players in Quebec will play the game with their heads uncovered. Why? Because team sports should emphasize universality, not draw attention to individual members. Because religion has no place in sport. Because it’s a slippery slope from turbans to genital mutilation. (You laugh, but many of the arguments against the accommodation of religious minorities are of the “where will it stop?” variety, in which head coverings are seen as gateways to more extreme religious practices.)

Instead, FSQ administrators throw out weasel words like “safety” to mask the intent of the ban. They might have said: “Want to play soccer in Quebec? Uncover your head — not because that wee piece of fabric is a danger, but because those are the rules. Don’t like them? Try cricket, or move to Ontario.” In life, as in soccer, FSQ administrators would have had way more credibility if they had just told the truth. They didn’t.