Paul Wells: Thatcher’s legacy will weigh heavy on Harper as he pays homage 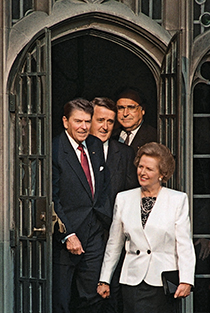 What will be on Stephen Harper’s mind as he flies to London for Margaret Thatcher’s funeral? What will the champion of feints and defts, a man who edits his speeches to take out the memorable bits, be thinking as he approaches the valediction of an Iron Lady?

The Canadian conservative movement has more than a few household gods, as befits a large and diverse group. The summer before he became prime minister, Stephen Harper told me the most exciting item on his vacation agenda was a meeting with Australian prime minister John Howard. When Kory Teneycke was Harper’s communications director he had a 1984 Ronald Reagan “Morning in America” campaign poster decorating his office. Jason Kenney actually helped chase Preston Manning out of politics, but you should see the look of affection on his face when he watches the Reform party founder speak today.

But Margaret Thatcher is the Big Kahuna of Canadian conservatism, for reasons having as much to do with timing and culture as with her own considerable accomplishments. While she was Britain’s prime minister, Canada was led by Pierre Trudeau and Brian Mulroney, the provinces by the likes of Bill Davis and Robert Bourassa. A generation of Canadians grew up believing our own country’s politics was a sea of vanilla pudding. Only Maggie offered grit. She stared down the unions, counselled Reagan and watched, warily, as the Cold War ended. On our TVs every night, endless handwringing over Meech Lake, whatever the hell that was. And then the news from London, Maggie steadfast against the tide.

So it’s no wonder that when Alberta’s Ralph Klein and especially Ontario’s Mike Harris rose to power a few years later, they were conspicuously surrounded by youngsters whose political conscience was incubated in the petri dish of ’80s Thatcher envy. There was a sense that it was in those two provinces that conservatism meant something, because it was about radical reform and steadfast serenity in the face of concerted opposition. And there is unmistakable nostalgia in the Canadian obituaries for Thatcher, because people who admired her do not believe there is much going on in today’s Canada—Harper’s Canada—to compare.

“She was and is particularly loved by young conservatives across the West, who viewed her resolve to place convictions ahead of political expediency—even when it was unpopular—as a godly virtue,” Adam Daifallah wrote in the National Post. He calls her “the most important non-American conservative figure of the 20th century and possibly the most important non-American political figure of any stripe.” Churchill? Gandhi? De Gaulle? Lech Walesa? But the claim is easy to understand. We are products of our surroundings.

It’s possible the outpouring of affection for Thatcher and Ralph Klein after their deaths will put a little extra pressure on Harper from the right this spring as his caucus chafes, the economy sputters and the Liberals unite behind a popular new leader. The Conservative convention this summer in Calgary will be important for Harper as he seeks to reassert himself as a leader whom Conservatives owe not just their gratitude, but their continued fervour. He has, after all, led his party for 11 years under the Canadian Alliance and Conservative brand names. Thatcher lasted not quite 16 before her own caucus turfed her.

He would protest, with some justification, that the times are different. The oil shock of the mid-1970s sucker-punched most of the Western economies in ways the bloated postwar social state, inflated by 30 years of easy money, couldn’t sustain. A sharp shock was necessary: the state and the labour markets had to learn to live within the new realities. Countries that adjusted early did better. Countries that never adjusted are dragging Europe down even today. Britain got a Thatcher when it needed one. Canada today needs a nudge, not a shove. Especially not a shove from a Prime Minister who first won the office with the smallest parliamentary minority since Confederation.

But the longer you survive in power, the more talk like that sounds like self-justification. Harper will land in a London he barely knows. He rose too late in our politics to know the Thatcher crowd, and he has not been close to David Cameron. He was gracious in inviting Brian Mulroney to join the Canadian delegation, and one suspects the flight will help cement a wary reconciliation between the two men. But Mulroney’s presence will underscore Harper’s estrangement from Thatcher’s era.

In an interview at the end of 2011, Harper said, “I’ve seen too many majority governments, the bureaucracy talks them into going to sleep for three years, and then they all of a sudden realize they’re close to an election.” He promised to stay “busy,” and he has done that, but in a manner designed to avoid the spotlight. What would a Stephen Harper who did not hold public office say about the one who currently serves? And how can he be sure Conservatives have not begun to say the same about him? These questions will be on his mind as he goes to pay homage to the mother of Canadian conservatives.

On the web: For more Paul Wells, visit his blog at macleans.ca/inklesswells