The PQ conundrum and the 'S' word

The PQ's win has nothing to do with the issue of sovereignty. Martin Patriquin explains why

It’s easy to forget, in the barrage of talk about sovereignty, identity, French and English relations—the usual grab bag of horrors that comes with any Quebec election—just how, well, ordinary Quebecers are when it comes to their priorities.

One of the most telling pieces of polling data I came across was in a Léger Marketing poll published August 17, midway through the campaign. The folks at Léger asked respondents to pick two priorities out a list of 16.

Numbers 1 and three through five might have been carbon copies of your average, dreary Ontario election. The only real difference between here and, I don’t know, any other of the nine provinces? No. 2: “Fighting corruption in the construction sector,” a made-in-Quebec priority helpfully perpetuated by Jean Charest’s Liberals during the past three years. So … 43 per cent are diehard fans of healthcare, and big fans of lowering taxes, jobs and the environment. They hate corruption. How perfectly boring.

Meanwhile, we are nearly oblivious to issues of referendum, language and identity issues. No. 10 on the list, at nine per cent, was Quebec sovereignty. Eight per cent of respondents picked “Protecting and promoting the French language.”

How about integrating newcomers, that PQ hobby horse? One per cent of the population say its a priority. To put that in perspective, three times that number think “modernizing our democratic institutions to foster citizen participation.”

Here’s another oddity: If the PQ takes power tonight, and it might well, it will be because the party was able to convince Quebecers that it is the agent of change—not because of the issue of sovereignty. It can’t be about the “S” word; according to CROP, a scant 28 per cent of Quebecers support the idea. It also means a Marois government will have to juggle the very real issue of governing a province with the other real issue of her party’s restive base of true believers.

It’s the classic PQ conundrum, which has felled the likes of René Lévesque, Pierre-Marc Johnson, Lucien Bouchard, Bernard Landry and André Boisclair: Too many Quebecers care about what is in front of their noses, instead of what might be in their dreams. 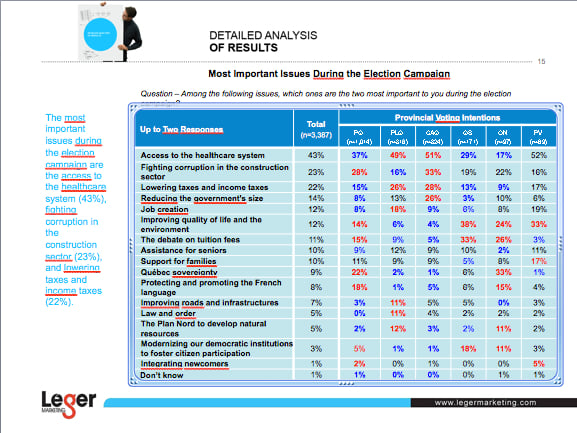