The PQ=GOP for French people 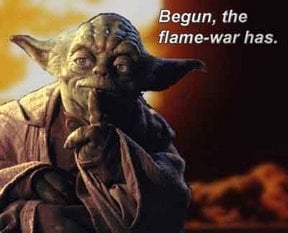 Whoah. I smells me another mini-psychodrama a-brewin’.

Andrew Sullivan, noted  gay Roman Catholic Libertarian blogger, had a zinger on his site today. While discussing how the Republican fringe (and, by extension, the Republican Party) is much louder than it is important, he said the following: “A reader recently made a very interesting reference. He said he believed that the GOP was morphing into the American equivalent of the Parti Quebecois. It is essentially a regional party now–representing the South in the national discourse. And its rhetoric seems divorced from any desire to actually hold responsible public office. So Republicans, like the Quebecers, tend to use politics as a means for disruption or protest or threat or veto.”

I won’t say much on this–far be it from me to stand in the way of a good péquiste-GOP-gay Roman Catholic Libertarian flame war. However, I’d argue that the PQ has always been a regional party–one with aspirations to be otherwise, of course, but a regional party all the same. Perhaps a better comparison would be the Bloc Québécois, in that it’s a federal party that represents a regionally based electorate. The Bloc, unlike the PQ, really and honestly has no desire to actually hold public office (though it’ll do so in a pinch.) And Duceppe et al. also know a thing or seven about disruption, protest, threats and (de facto) vetoes.