They're turning on themselves!

The car manufacturers, silly. Who did you think I was referring to? Check out this billboard I saw in Toronto yesterday: 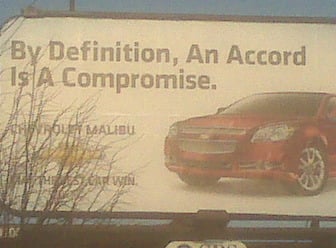 I’m not much of a car guy, and it never occurred to me that the Chevy Malibu is in the same category as a Honda Accord (to me, the Accord says “successful bureaucrat”, while the Malibu says “airport rental”). This isn’t exactly an attack ad, it’s more of a contrastive spot.  But most contrastive car ads (indeed, most contrastive ads in the consumer marketplace in general) refer to “the other leading brand” or somesuch, which is why it is interesting to see one car company going directly after another company’s model.

Unlike politics, negative campaigning is relatively uncommon in the shopping mall. There are lots of possible explanations for this, but I think one major reason is that because the size of the stakes in the political marketplace is fixed (there is a fixed amount of power to go around), politics is a zero sum game. The consumer market, on the other hand, can grow, and one company’s success does not necessarily come at the expense of a competitor (think of what Starbucks did for the coffee market, or Red Bull for energy drinks). Attack ads in these markets risk turning customers off the entire category.

Which might help explain why car companies are now going after one another: The market is not growing nearly as fast as it needs to for all to thrive, it is something like a zero-sum market now. So Chevy is going after Honda, Chevy goes after Ford, and everyone is going after Toyota.

I’m all for duking it out over brand identies. But if were in the car biz, I’d be really wary about going after another company over recalls and other safety issues. Recalls, after all, are as American as the 5000-calorie bacon burger, and what goes around will assuredly come around. Besides, it is increasingly obvious that there is nothing particularly wrong with Toyota’s cars. I doubt Toyota will forget how they’ve been hung out to dry by the industry.