This Day in Handshakes

But my new fave is rapidly becoming CCTV, Chinese state television. As the host Olympic broadcaster it is playing constantly in every bar and restaurant in Beijing. In the countdown to opening ceremonies Friday, I was particularly impressed by Chinese advancements in product placement. A giant Lenovo lap top (official computer of the XXIX Games) obscured most of the bouffant-sporting male anchor’s torso. And Haier, the Olympics’ official appliance-maker had its logo splashed across a podium next to the female anchor. (One assumes efforts to place a fridge on the news desk proved impractical.)

Last night at dinner, we were privileged enough to catch the main 10:30 news cast. On day one of competition China won two golds—Chen Xiexia in women’s 48kg weight lifting, and Pang Wei in the 10m air pistol event. So the top story was naturally…..Chinese President Hu Jintao, gripping and grinning with a variety of foreign leaders. CCTV devoted a full 10 minutes to this handshake marathon. Featured participants, included Australia’s Kevin Rudd, Gloria Macpagal Arroyo of the Philippines, Mongolian President Nambaryn Enkhbayar, and Islam Karimov of Uzbekistan. (What? You don’t know him by sight?) 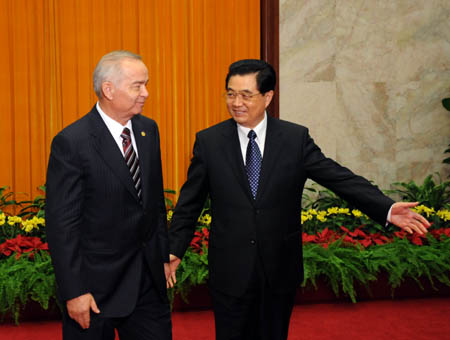 After that, the newscast moved on to the ceremonial arm pumping of a plethora of lesser lights and tin pot dictators. Finally, viewers were treated to an equally exhaustive report on all the dignitaries who dropped in for tea with Yang Jiechi, China’s foreign minister. Stephen Harper can only dream of such coverage.

To be fair, Chen Xiexia was the featured guest on what appeared to be China’s version of The Tonight Show, or Letterman. (I could tell because no one was laughing.) She even warbled Happy Birthday to her coach, Ma Wenhui, as a cake was brought out on stage. He and the other assembled dignitaries were then forced to eat it without using their hands or utensils.

And in the audience sat former Canadian sprinter Bruny Surin. I have no idea why.