Top Chef Canada is back

Food Network Canada held a meet and greet with the press this morning to introduce six of the 16 contestants competing in the second season of Top Chef Canada. They even organized a quick fire challenge that had the Toronto-based chefs choosing ingredients from an edible mound of plenty. 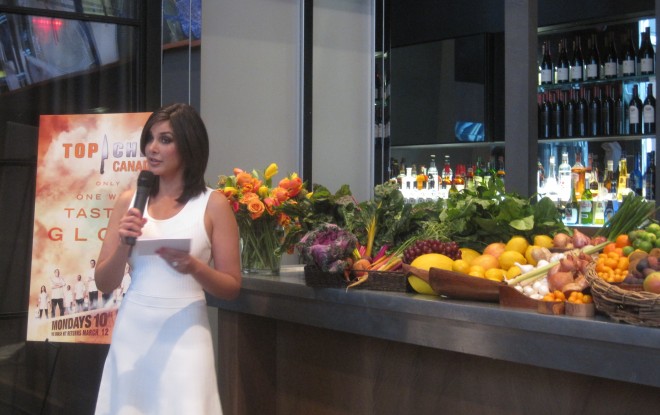 Of course, there was a catch: the cooks had to incorporate into their dish secret ingredients chosen ahead of time by the journalists in attendance. I chose Sicilian blood oranges and sardines. Other press-selected items included frozen vegetables, Korean chili paste, kale, foie gras and guanciale. (That’s Italian cured pork cheek. Don’t feel bad if you didn’t know; new host Lisa Ray, who’s filling in this season for host Thea Andrews, had to ask—and she’s a “self-confessed foodie”.)

With 45 minutes to prepare an appetizer—head judge Mark McEwan reminded them to consider proportion, composition and presentation, “but at the end of the day, it’s got to taste great or nothing else matters”—the chefs battled it out on the kitchen line at Victor restaurant in the Mercer hotel. 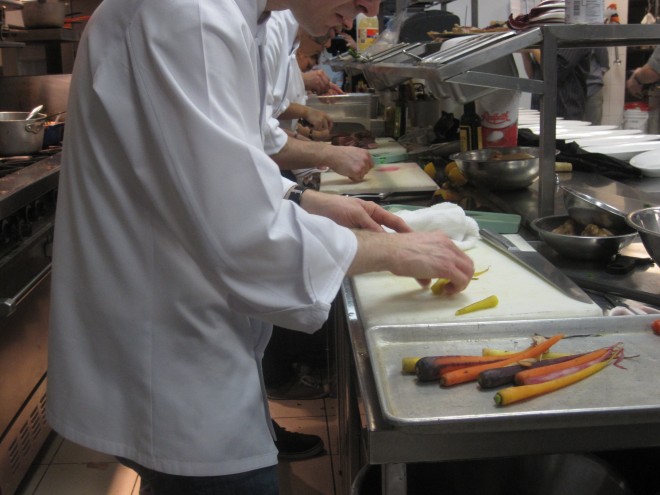 While the cooks toiled, I got a chance to ask McEwan and resident judge Shereen Arazm what the biggest difference is between season one and season two. They simultaneously responded: ” better cooking!” Turns out that plenty of the country’s top culinary talent held back auditioning the first time around, and with good reason; what if the show was a flop? But the first season of Top Chef Canada was more than just a smash hit, it’s the highest rated show in Food Network Canada’s history.

L.A-based star restaurateur Arazm gushed about this year’s competitors: “Literally, in the last week of the show, Mark and I had some of the best food we’ve ever had in the world.” McEwan added: “I don’t just mean from two or three chefs, but from six or seven of them.”

The final six appetizers that the chefs plated for the press were certainly impressive. The three female chefs, Elizabeth Rivasplata, Trista Sheen and Sarah Tsai, dished up variations of crostini; chef David Chrystian wrapped a miso-glazed carrot in the guanciale and Carl Heinrich whipped up shooters of chicken soup. But the winner, according to McEwan, was Ryan Gallagher, who, before becoming sous chef for Lynn Crawford at Ruby Watchco, was the personal chef to the Thompson family. He topped a beet chip with a fois gras mousse and a gooseberry that popped in your mouth. It was bang on: perfect size, perfect texture and, most importantly, it tasted great. 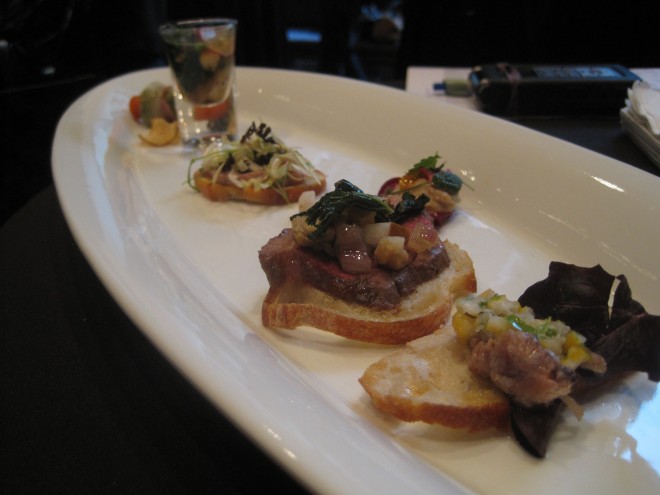 But it won’t be all happy times and roses in the kitchen. McEwan said that, “there were days when the chefs were rocks stars, days that they fell apart, and some tears, too.”

“Didn’t I make somebody cry in the first episode?” asked Arazm.

Sounds good to me. If action-packed cooking and weeping chefs are your thing, too, tune in to the Food Network on March 12 at 10:00 p.m. ET/PT.