The six-foot-eight forward from Thornhill, Ont. considers his college options 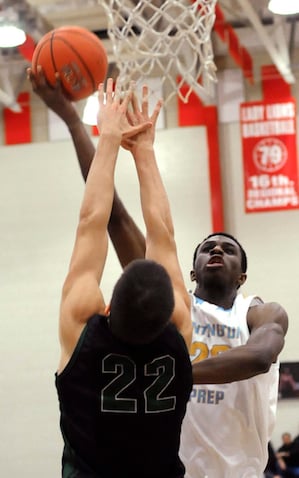 It was a perfect-10 dunk for Canadian high school basketball phenom Andrew Wiggins, 18, at the Powerade Jam Fest Monday.

Wiggins, who hails from Thornhill, Ont. and now plays in the States for Huntington Prep in West Virginia, wowed crowds with a reverse-between-the-legs 360 dunk.

His move was part of a slam-dunk contest in Chicago Monday, prior to the All American Games, which feature the best high school players from across the U.S. and raise money for Ronald McDonald House Charities.

Six-foot-eight forward Wiggins is a rising star. He was named the 2012-13 Gatorade National Boys Basketball Player of the Year and is considered a top college recruit, though he is still deciding where he will play after high school. The Chicago Tribune reports that he’s got it narrowed down to Florida State, Kansas, Kentucky and North Carolina.

Wiggins may have been the crowd favourite, but his move wasn’t enough to give him the win in the dunk contest. That honour went to Chris Walker of Holmes County in Bonifay, Florida.

This video might tell you why so many colleges are hoping Wiggins will choose them.