The internet has a limitless ability to throw off these little cultural shivers of viral popularity, but this is one of the weirdest. At Boston Celtics games this season, during pauses in the action they’ve been playing this old American Bandstand video from the 70s showing dancers doing retro disco moves. This one guy has become really popular — he looks like the shoe bomber and is wearing an extremely tight Gino Vannelli t-shirt. Fans have started making their own “Gino Time” t-shirts and are now practicing their own disco moves in the aisles of the stadium.

It’s a fun read — and the high irony of the piece has a rather sad ending. 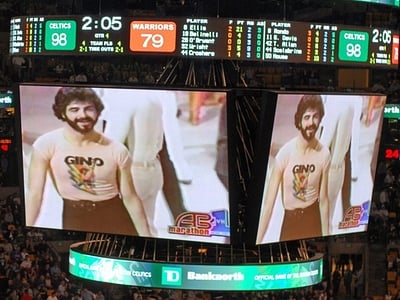