What do you get when you mate a Leaf with a Lion? 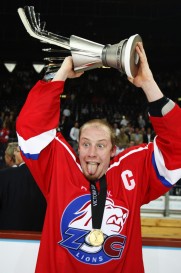 Never mind the wins and losses—well, at least for a moment—and consider the most significant news to come out of bluebloodland last week: the deal between the Toronto Maple Leafs and the Zurich Lions of the Swiss League. In the 1970s, Peter Ustinov said Toronto was like “New York run by the Swiss,” and while things are a lot more lively these days, much of the city still operates like the reliable and steady gearworks of a Geneva pocket watch. Partnerships with teams in Lisbon, Barcelona, Assiago, and Paris would have been more alluring, but these are still your father’s Leafs. Few are allowed either in or out of the room with the velvet rope.

I’ve been wondering what might have precipitated this engagement and why this was celebrated as a significant event in Leaf media land. Was it to distract fans from that which has been rumoured over the past few weeks: James Reimer’s brain injury. Another thought: I think if we started calling concussions “brain injuries,” it might get people wising-up to the seriousness of this business. It’s easier to conjure notions of dementia and madness out of brain injuries. Calling them concussions is like calling them pulled hamstrings or separated shoulders. “Brain injury” is a more frightening term. And if the bluebloods aren’t already frightened by Reimer’s, they should be.

Okay: why Zurich? Why Switzerland? Why Europe? Is it that the Leafs hope to one day facilitate an opportunity for Ron Wilson in a white lab coat with wild Robot Chicken hair to stand behind the controls of the city’s atom smasher wildly cranking the dials having fed into it the DNA of Syl Apps’ legs, Tim Horton’s hip, Red Kelly’s fedora, King Clancy’s laugh, Eddie Shack’s sideburns, Allan Stanley’s nose and Borje Salming’s wrists in an effort to create a team of über-Leafs? Or are the Lions simply part of a national Swiss investment promotion to encourage the rich to fatten their secret bank accounts: exceed five million dollars and win our team! Or is it that the stolen art/ultra-conservative/conflict-neutral/money-hoarding patina of the nation’s austere, funless profile is to Larry Tannenbaum what Cabo is to Kid Rock? Maybe, after dozens of visits there, you’re given the third line, then the second, then the first. Eventually, the team is wearing blue and white and fans are gnawing on twelve dollar sandwiches. John Bower is their scar-faced overlord and the crowd swoons to the songs of Alan Frew.

Then again, perhaps the idea of twinning with the bluebloods is, to Lions’ fans, akin to dancing with a mighty, established sporting brand: a sure-fire way out of the overseas hockey hinterland; a cry above the crowd. Still, maybe we’re not giving them enough credit. Maybe there’s something appealing and darkly European about being tied to a flailing team like maidens at the prow of a sinking ship. Maybe self-flaggelation and masochism is what they’re after. Maybe they like that sort of thing. If so, Lions’ fans should call me. I could show them around.