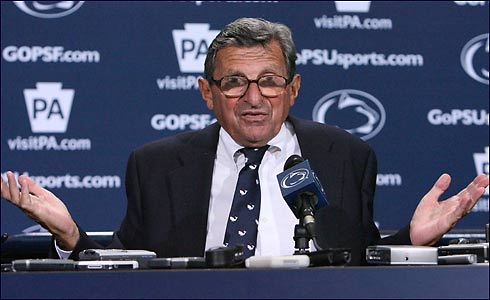 I don’t know Father Raymond J de Souza beyond his handsome National Post faux-woodcut that, more often than not, serves as a reminder not to read the words appearing below it. My Thursdays are busy enough without a side order of Catholic guilt, thanks, and I dare you to try to get through an entire column without a feeling that Father de Souza is busy wagging his finger at something, somewhere. Sacre-moi la paix, as they say in these parts.

So it was nice to see Father J take on the recently departed Penn State coach Joe Paterno recently. I mean, if you’re going to wag your finger at someone, it’s might as well be the guy who suppressed information regarding the alleged pedophiliac excesses of one of his former coaches, right? Paterno, the man who kept quiet in the face of wickedness, thereby arguably allowing it to continue—namely, with two other pre-teenaged boys in the years following. Slam dunk, no?

No. Rather, Father de Souza inexplicably offered up 786 elegiac words for dear old JoePa. Here are a few choice cuts from his column, annotated for your enjoyment.

After a few paragraphs saluting St Joe—”God made Joe Paterno to be a football coach. And when there was no longer football to coach, God called him home”—de Souza finally gets around to mentioning Jerry Sandusky, JoePa’s former assistant coach at Penn State who, as we now well know, is believed to sexually assaulted 10 young male victims between 1994 and 2006.

In November he was fired by the Penn State board of trustees after charges of sexual abuse were made against Jerry Sandusky, a long-time Paterno assistant coach who retired in 1999. Paterno was told of an incident in 2002, which he passed on to his superiors, but it was not reported to police.

“…but it was not reported to police.” Interesting use of the passive voice, which effectively scrubs Paterno of any responsibility to follow up on what was surely an alarming thing to hear. How alarming? According to the grand jury testimony, here’s what was reported to him by a graduate assistant we now know to be Mike McQueary:

The graduate assistant, who was familiar with Sandusky, was going to put some newly purchased sneakers in his locker and get some recruiting tapes to watch. It was about 9:30 p.m. As the graduate assistant entered the locker room doors, he was surprised to find the lights and showers on. He then heard rhythmic, slapping sounds. He believed the sounds to be those of sexual activity. As the graduate assistant put the sneakers in his locker, he looked into the shower. He saw a naked boy, Victim 2, whose age he estimated to be ten years old, with his hands up against the wall, being subjected to anal intercourse by a naked Sandusky.

Yet beyond telling Penn State athletic director Tim Curley, Joe Paterno did nothing. He didn’t bother to follow up on the incident or go to the police himself, even though Sandusky was still operating the Second Mile organization for troubled youth, a job that put in him daily contact with children. As the grand jury testimony notes, Sandusky was never banned from campus. And, according to that same testimony, Sandusky assaulted an 11-year-old in 2004—two years after the incident Paterno knew about. Between 2005 and 2006, he did so again with another victim. All in all, Sandusky is charged with 40 counts of abusing young boys.

But back to de Souza’s column:

After six decades at Penn State, Paterno admitted he was heartsick that he had not done more, and offered to retire himself. The shabby manner of his sacking — delivered over the phone — by a panic-stricken board compounded the sadness of his serious failing. It was an off-key note to conclude a brilliant symphony.

Maybe. It’s also possible that the board was panic-stricken because its members realized the grave cost of Paterno’s silence. Two victims suffered Sandusky’s alleged abuse because no one, Paterno very much included, said a word. Instead, they squelched it, and for nearly ten years things went on as before. Joe Paterno kept winning football games, the university continued to bask in his glory and, according to grand jury testimony, Jerry Sandusky kept abusing kids. That is one hell of an “off-key note.”

De Souza ends his enthusiastic air kiss to Paterno’s memory with a meditation on good and evil. In his mind, there is no question on which side Paterno falls.

Good vs. Evil was the hype. Football teams are rather less than that. But JoePa — the dinosaur and the grandfather — was one of the good guys. Sometimes the good guys win, and once in a lifetime — a grand lifetime — the good guy wins more than anyone else.

A month or so ago, Father de Souza wrote about Christopher Hitchens’s passing. He was decidedly less charitable. “The sadness is that there is a hell for Hitch to go to,” he wrote on December 20. “He was granted a long farewell, with the opportunity for reconsiderations and reconciliations with those he hated and those he hurt.” So: Paterno is one of the heaven-bound good guys and Hitchens, who devoted a considerable amount of ink decrying the abuse of children by the supposedly blessed representatives of organized religion, is currently roasting in hell. What an odd world Father de Souza lives in.