'Folks, I have nothing left to hide'

Toronto Mayor Rob Ford has admitted to smoking crack cocaine, but he is not stepping down.

“Yes, I have smoked crack cocaine,” Ford told reporters, who were gathered outside his city hall office on Tuesday. “But am I an addict? No.”

When pressed as to when this crack smoking happened, Ford said he tried smoking crack “probably in one of my drunken stupors, probably approximately one year ago.”

The mayor said that “I have made mistakes. All I can do now is apologize and move on.”

As reporters asked more questions, someone seems to have said: “Are you on crack right now?” The mayor then laughed, turned around and walked back into his office.

After his surprising announcement, Ford met with Deputy Mayor Norm Kelley, who emerged from the mayor’s office to say that Ford would address reporters for a second time later in the afternoon. Around 4:30 p.m., a red-faced Ford appeared in front of dozens of reporters to apologize again and say he would not step aside.

“Folks, I have nothing left to hide,” said Ford.

He then urged the city to get back to business.

“For the sake of the taxpayers of this city, we must get back to work immediately. We must keep Toronto moving forward,” Ford said, reading slowly from prepared notes. “I was elected to do a job and that’s exactly what I am going to continue doing.”

He continued to say that he would run again for mayor and that people would have a choice in the next scheduled election, which is in October 2014.

“In 2010 I made a commitment to Toronto voters,” Ford said. “I have delivered on that commitment and I will continue to deliver on that commitment of saving taxpayers money. They have a choice. We live in a democracy. On October 27, 2014, I want the people of this great city to decide whether they want Rob Ford to be their mayor.”

The mayor admitted to crack cocaine use Tuesday after Toronto police chief Bill Blair said, on Oct. 31, that a video appearing to show the mayor smoking crack cocaine did, indeed, exist and that police had it. Blair made the announcement at the same press conference where he announced extortion charges against Ford’s friend and sometimes driver Alexander Lisi, 35. The charges against Lisi relate to the video of the mayor, police alleged.

One reporter from Gawker and two reporters from the Toronto Star had published reports in May saying that they had seen a video in which the mayor appeared to be smoking crack cocaine and making racist and homophobic remarks.

Up until last week, the mayor said that he could not comment on a video that “I have never seen or does not exist.” (Read the full statement Ford made to the media about the crack video in May here.)

In his first address to reporters Tuesday, the mayor said journalists just weren’t asking the correct questions about his crack use before.

“So I wasn’t lying, you didn’t ask the correct questions,” Ford said. “No, I’m not an addict, and no, I do not do drugs. I’ve made mistakes in the past and all I can do is apologize, but it is what it is and I can’t change the past. And I can apologize to my family, my friends, my colleagues and the people of this great city.”

Upon Blair’s revelations a week ago, Ford changed his response to questions about the video, saying that the police chief should release the video and show it to the public. After his admission Tuesday, Ford said he wants “everyone in the city to see this tape.” The video is currently before the courts and cannot be released. 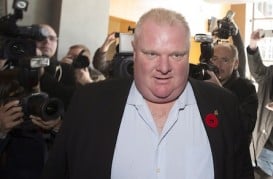 Ford began apologizing on Sunday during the weekly call-in radio show he hosts with his brother. However, during the radio show, he only apologized for “mistakes.” When a caller asked for specifics, Ford mentioned his widely reported drunken behaviour during two public events: the Taste of the Danforth festival in August and another incident on St. Patrick’s Day where, reports say, the mayor was asked to leave a downtown bar. During his radio show Sunday, neither Ford nor his brother Doug Ford mentioned drug use as part of the apology.

On Tuesday morning, Coun. Doug Ford appeared on several Toronto radio programs and held a press conference where he called for the police chief to step down, saying that he was biased in his investigations.

Ontario Premier Kathleen Wynne, who had not commented on Ford or the video since Blair’s announcement on Oct. 31, broke her silence on Tuesday afternoon, saying she is concerned for the city of Toronto.

“My concern is that what is happening at city hall makes it very difficult for the business of city hall to carry on in a normal way,” Wynne told reporters. “That’s my biggest concern, as a citizen of the city, and as the premier. We want municipalities to be able to function, and there is a huge amount of turmoil at city hall right now.”

Justice Minister Peter MacKay also weighed in on Ford’s admission Tuesday, saying it was “certainly a sad day for the city of Toronto.”

“I’m the Attorney General of Canada, I’m the justice minister, you know where I stand on the use of illegal drugs,” he told reporters. “As a human being I think that the mayor of Toronto needs to get help.”

Even before Ford made the stunning admission Tuesday, many councillors were urging him to step down, or at least step aside to deal with his personal issues. However, city councillors do not have the power to remove Ford from office.