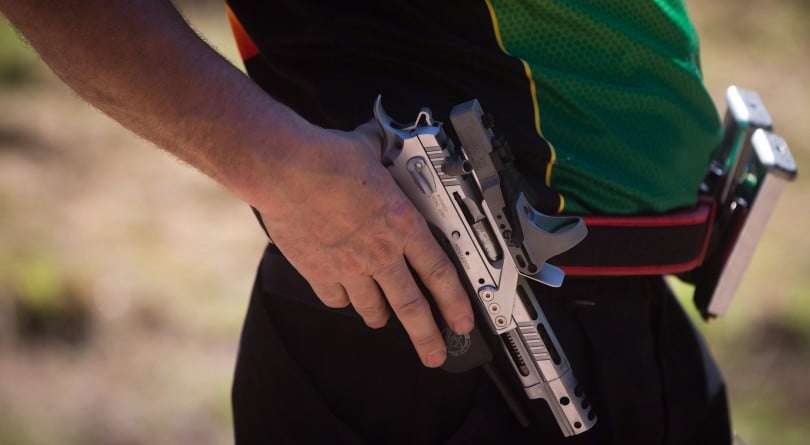 Barry Moore, of Saskatchewan, places his hand on his handgun as he waits to compete during the International Practical Shooting Confederation (IPSC) Canada National Championships in Pitt Meadows, B.C., on Thursday July 31, 2014. Nearly 300 people are taking part in the competition that tests speed and accuracy under a scoring system. Competitors are put in situations where they quickly have to get off a shot at a target that is also moving during some stages. The six-day event runs until August 3. THE CANADIAN PRESS/Darryl Dyck

Dr. Blake Brown is an Associate Professor in the Department of History at Saint Mary’s University

The recent mass shooting in Toronto’s Danforth neighbourhood has renewed the debate over Canada’s gun laws.

Critics dismiss the idea as a knee-jerk reaction by people generally lacking technical knowledge of guns and firearm laws.

However, the history of gun control shows that many Canadians have long called for tighter laws related to handguns because of the danger posed by modern pistols that offer a substantial amount of firepower in a small, concealable package.

At the beginning of the 19th century, handguns were generally single-shot, muzzle-loaded weapons. They were inaccurate, slow to reload and often misfired. Over the course of the century, gun-makers produced “revolvers” that held multiple rounds of ammunition and could be fired multiple times quickly.

The price of revolvers dropped with industrial manufacturing. Consumers could purchase a revolver in Winnipeg for $1.50 in 1883, while Eaton’s offered revolvers in 1899 for as little as $1.75

The appearance of cheap weapons and lack of government regulation led to worries about the use of revolvers in accidents and crimes. In 1871, the Globe of Toronto called pistols “an unmitigated evil” and said every boy had “pistol fever.”

For every pistol used for defence, 10,000 were “made the instruments of death in the hands of careless or silly people,” according to the Globe. It would be best to outlaw revolvers, or at least appoint a board to determine the “amount of sense necessary to make a person a safe custodian of a loaded pistol.”

Conservative lawyer and politician Robert Harrison also advocated regulation, suggesting in 1872 that pistols were “too common in our country” and were “much too indiscriminately used.”

Commentators suggested that many young men carried revolvers to demonstrate their manliness. Sen. Billa Flint claimed in 1877 that the “youth of our land are fast training themselves in the use of firearms, and particularly pocket pistols.” “Mere boys” who “could save a little money, used it for the purpose of obtaining pistols.”

Sen. Alexander Campbell blamed the tendency of young men to carry a handgun on the idea that this “shows in some way their manliness.”

It also became an offence to sell a pistol to anyone under 16. Businesses selling pistols had to begin keeping records of the purchaser, the date of sale and information on the gun.

In 1913, the Conservatives increased the potential penalty for carrying a handgun outside the home or place of business without a permit to three months. In the early 1930s, the Conservatives provided that handgun permits could only be issued on the grounds that the owner needed to protect life or property, or the pistol would be used at a shooting club. The punishment for carrying a handgun without a permit was also increased to up to five years.

In 1934, the Conservatives created the first handgun registration system. In 1968-1969, the Liberals established the three-part division of guns between “firearms,” “restricted weapon” and “prohibited weapons,” placing handguns in the restricted category.

Critics of gun control note that Canada’s handgun legislation has not stopped shootings. Of course, no law can stop all firearm violence. Collectively, however, this legislation has been a likely element in the evolution of vastly different gun cultures in Canada and the United States.

The majority of American households with firearms have at least one handgun. In comparison, a relatively small minority of firearm owners in Canada possess pistols, despite a recent increase in the number of restricted weapons in circulation. While the United States has 10 times the population of Canada, it has approximately 100 times more handguns.

Considering this arc of history, the calls to outlaw handguns by former Liberal prime minister Paul Martin in 2005, and now by John Tory, once the leader of the Ontario Progressive Conservatives, seem less like knee-jerk proposals. They rather appear to be in line with the historic Canadian trend to limit the presence of modern pistols.