Interactive: How Canadian tuition fees have changed in the last 5 years, by province 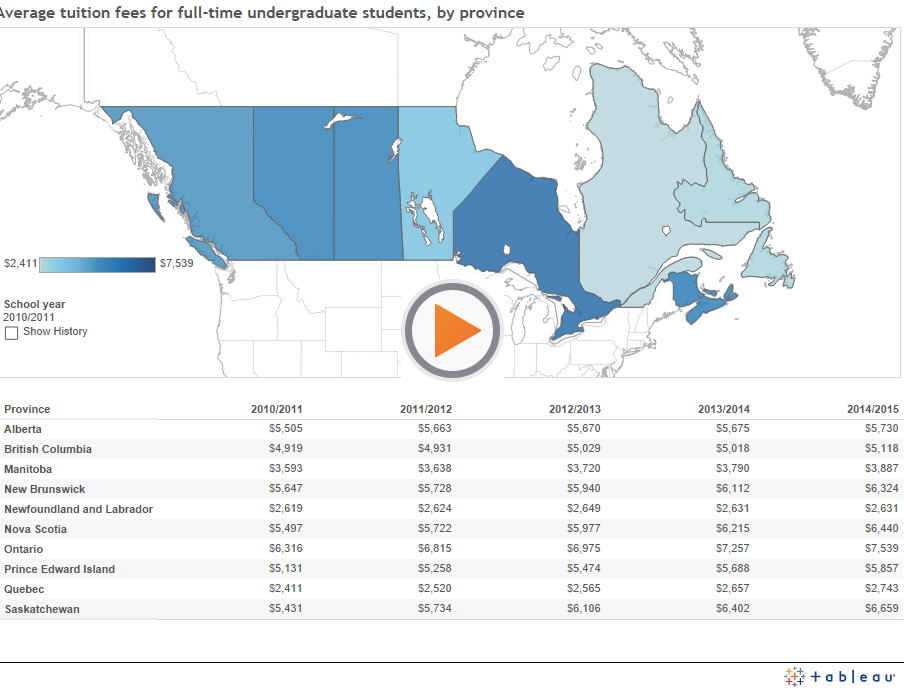 Undergrads in Canada can are now paying, on average, $5,959 in tuition fees for the school year that just started this fall, or 3.3% more than they were last year. These preliminary numbers for the 2014/2015 academic year from Stats Canada focus on full-time university students and how much they pay, depending on province or program.;

These numbers were released fresh off the heels of a new report predicting university tuition could rise by as much as 13 per cent over the next four years to the Canada-wide average of $7,755.

Students in Ontario pay the most, with average tuition fees coming to $7,539, a 3.9 per cent increase over last year. The biggest increase in tuition, year to year was in Saskatchewan, which has the second highest fees in the country. Undergrads there saw fees rise by 4 per cent to the new average of $6,659.

On the other side of the country (and price range), students in Newfoundland and Labrador had the lowest tuition fees. It was also the only province where tuition fees froze from their 2013/2014 levels. This year and last, they paid $2,631 on average. Quebec came in a close second with an average of $2,743, a 3.2% bump from last year.

Taken together, then, the general structure of a five section paper ought to look something like this:

A clarification of how this case demonstrates your thesis http://academic-writing.org/essay-help.

When it comes to costs, not all programs are created equal. Getting a degree in Dentistry can set you back by $18,187. There’s more bad news for would-be dentists: tuition costs rose 4.6 per cent from the last academic year. Medicine followed as the second priciest undergrad degree with tuition fees averaging at $12,959, a 3.9 per cent increase from last year.

Increases weren’t limited to the priciest programs. Tuition fees edged up from last year for every single field of study. The biggest leap was for students of law, legal professions and studies who saw a 4.7 per cent jump to $10,508.

Want to see how tuition has changed for Canadian undergrads over the last five school years? Check out the interactive map and table above (tap to interact and pinch to zoom in). Use the slider to see the provincial averages change from year to year.

Full stats available here. (NOTE: The averages don’t factor in grants, scholarships and other subsidies available to Canadian students, which can offset tuition costs. As well, Statistics Canada did not release data on Canada’s territories.)