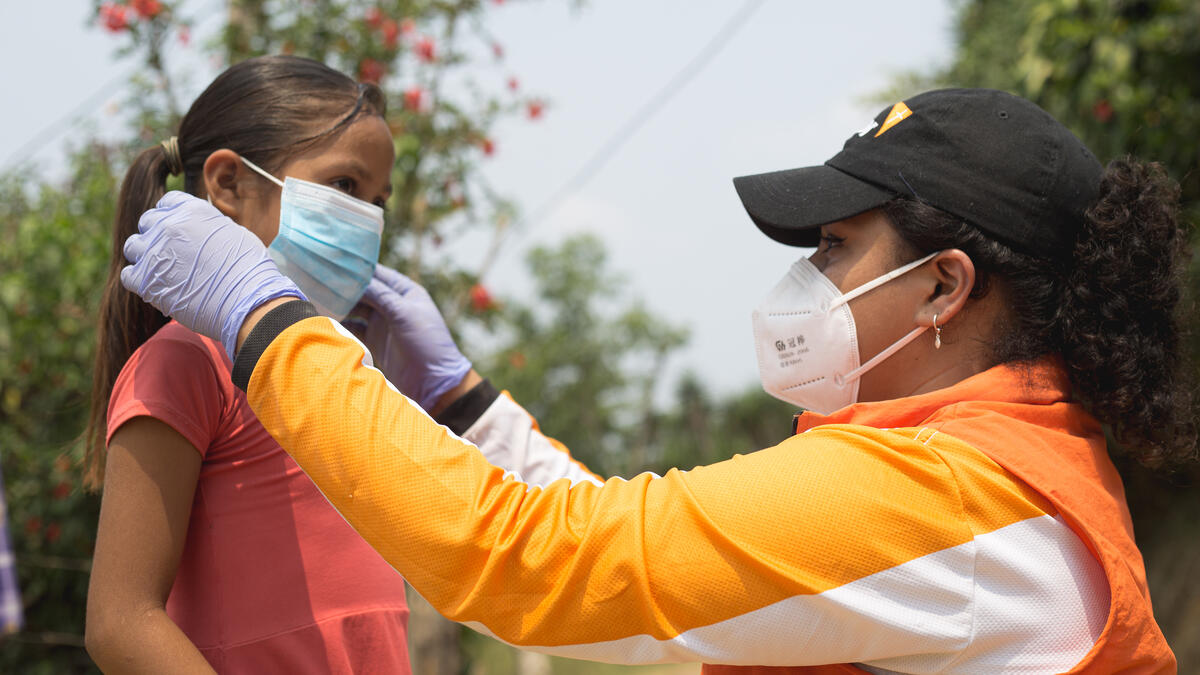 COVID-19’s impact on the charity sector

Bearing the brunt of instability are children—particularly girls.

Last November, Imagine Canada—the national charitable organization that oversees Canadian charities—surveyed a thousand registered charities about how they’re coping and managing during COVID-19. Not surprisingly, the findings were bleak: Need was up, jobs were down and revenue fell 43 per cent short. Just when they needed support the most, 68 per cent of organizations saw a decline in donations.

In times of crises and uncertainty like this one, many people immediately shift into survival mode. A third of Canadians admitted they donated less to charity in 2020, citing “pandemic-related financial reasons” to Imagine Canada, but the whole truth is not as simple as when times are tough, people pinch pennies. 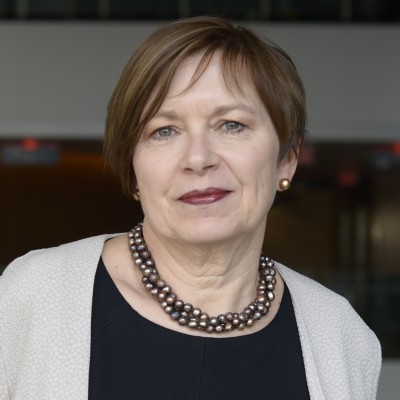 “People respond to what they see and feel in their communities,” explains Professor Susan Phillips of Carleton University’s Philanthropy and Nonprofit Leadership graduate program. “They still give, but the way they give changes. People tend to direct their giving to local organizations whose needs feel nearby and immediate.” Data is still new and ever-changing, notes Phillips, but donations to frontline responders and local food banks are actually up.

While this may be a small consolation to Canadian minds, it’s not great for international charity organizations like World Vision, who immediately recognized the severity of the situation—both short-term and long. “We recognized from our expertise and experience with infectious diseases, particularly from the Ebola crisis, that the implications would be wide and vast,” says Brett Tarver, World Vision’s advocacy communications lead. Moreover, like the virus itself, they’d arrive in waves. “We’re looking not just at the initial, primary impacts of the virus itself, but the tremendous secondary impacts. These are the ripple effects that aren’t even on people’s radar yet.” 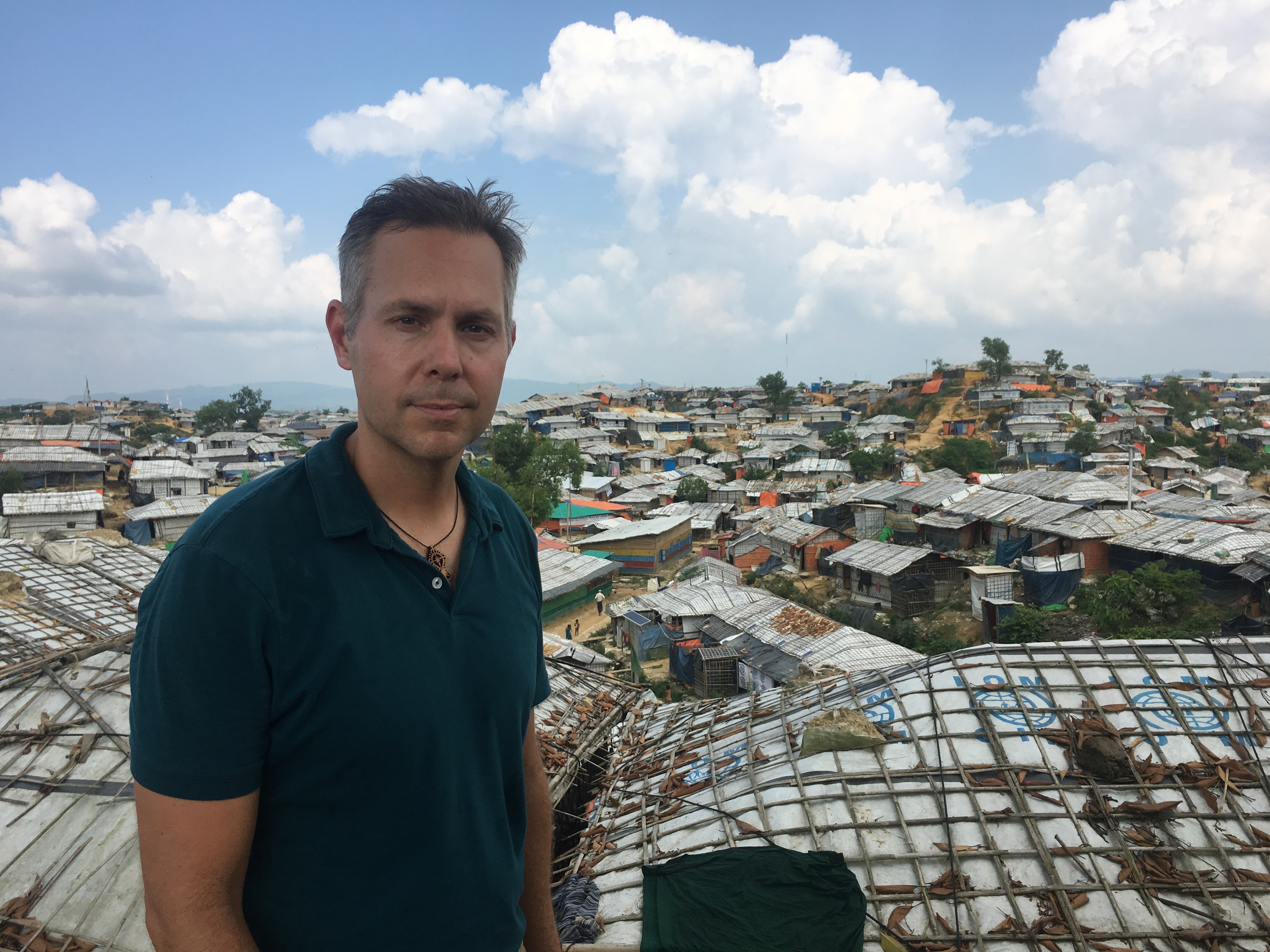 In hopes to change this, World Vision and its many charitable partners pooled together their knowledge of the past in order to—as much as possible during unprecedented times—predict the future. They extrapolated statistics and scenarios and commissioned not one but five reports to raise awareness. The result is COVID-19 Aftershocks, a comprehensive 20-page report on the impact of the pandemic on an often overlooked population when it comes to COVID: children.

For seventy years, World Vision has worked in close partnerships with communities big and small across 90 countries. Regardless of culture, religion or gender, World Vision has helped millions of children at risk, most recently those the most affected by what they call the “3-Cs”: COVID, Conflict and Climate change.

Tarver admits that when we think about COVID, we do not often think much about children. “From the very beginning, this was considered an older-person’s disease that didn’t affect kids too much,” he says. While data shows that children’s hospitalizations, ICU admission, deaths and complications are far lower than that of adults, Aftershock emphasizes that this fact in no way makes children immune to the disease’s impact. “There’s this false perception that children don’t get COVID, so it’s not about them. But it absolutely is.” 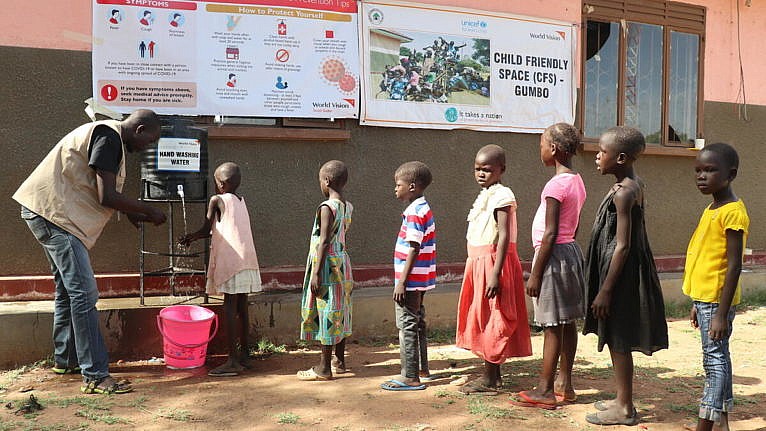 In South Sudan, World Vision’s child protection social worker guides the children at one of the child friendly spaces on how to wash their hands properly to avoid diseases. 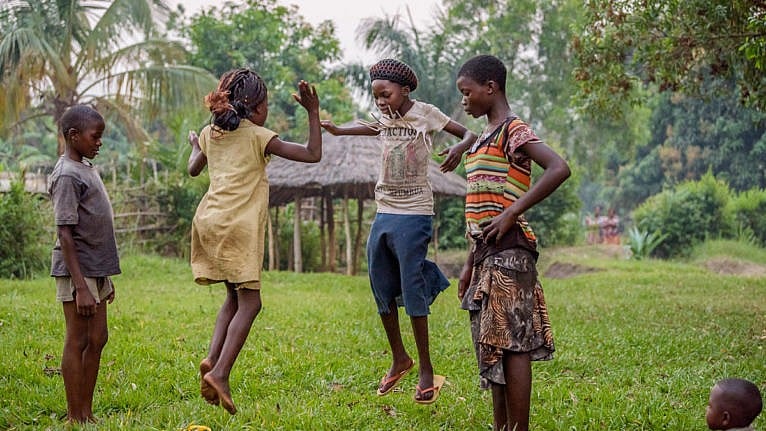 In a small village outside of Kananga, Democratic Republic of Congo, 14-year old Marie plays a game called "Nzango" with her friends in front of the school she'd love to attend if her family could afford the fees. 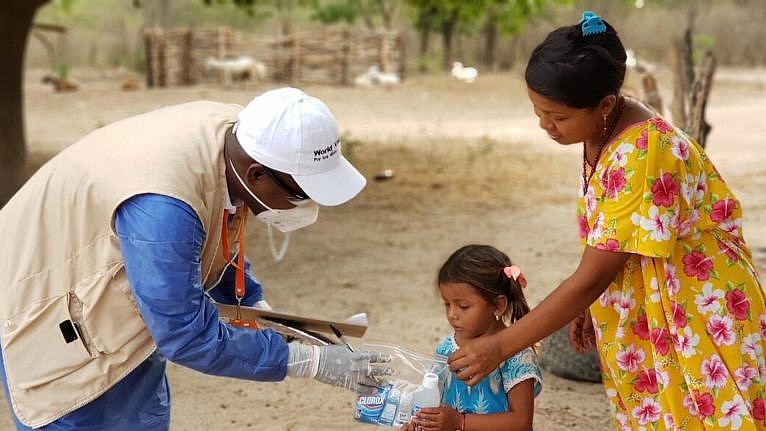 More than 165,000 migrant children, adolescents and adults have flooded the La Guajira region. The situation has been aggravated by COVID-19, restricting access to health, education, nutrition, economic and other basic services. 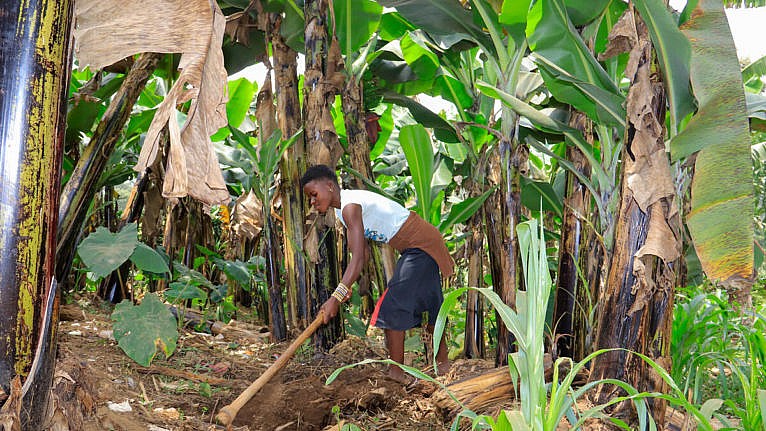 Eve, a displaced teenaged girl living in the Eastern DRC, has dropped out of school and is helping to support the family while her parents look for employment. 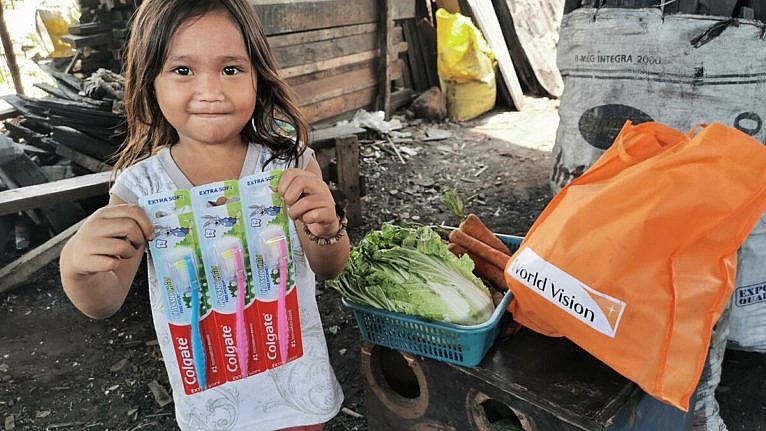 World Vision distributed a total of 3000 kilograms of fresh vegetables, vegetables and sanitation kits to 1,000 families in Malabon, Philippines. 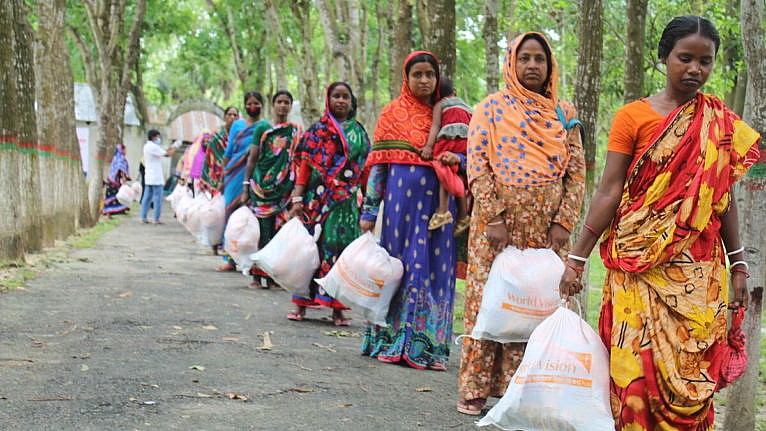 While safer from infection and with a lower mortality rate, children are disproportionately affected by indirect effects and impacts. Among them, economic uncertainty, hunger and violence (physical, emotional and sexual). All can occur inside the family or out, and all can compile atop each other. “With economic instability, for example, children can be pushed into the workforce or families could resort to things like child marriage,” says Tarver. “In times of crisis, these are a number of what we call ‘negative coping mechanisms,’ and they come in many different forms.”

Aftershocks predicts that, as a direct result of three months of quarantine, up to 85 million more girls and boys worldwide may be exposed to violence—an increase of up to 32 per cent. Experts from Bangladesh revealed beatings by parents or guardians had increased by 42 per cent.

Women and girls are especially vulnerable. The United Nations predicts 13 million extra child marriages will occur in the recovery years following COVID-19. In Kenya, the Chief Justice announced that in just the first two weeks of April, the country experienced a 35% increase in gender-based violence cases and a 50% increase in violence against girls.

For that reason, World Vision has ramped up their programming like never before. Its global campaign, It Takes A World to End Violence Against Children, has, even in the midst of an international pandemic, managed to implement 47 new child protective policies; train 14,700 frontline workers on child rights and protection; and offer this programming to 392,100 children across the globe—and counting. Its Raw Hope initiative sends donations directly to children living in the most dangerous, fragile places in the world. And in honour of the UN’s International Day of the Girl on Oct.11, World Vision hopes to have 1,000 girls in-need sponsored.

Sponsoring a girl directly ensures they have access to basic rights that are often out of reach, more so in times of global crises: food, clean water, education and health care. Education goes beyond schooling for girls, also equipping families with the information they need to better protect children from abuse and injustice, such as early marriage or child labour. 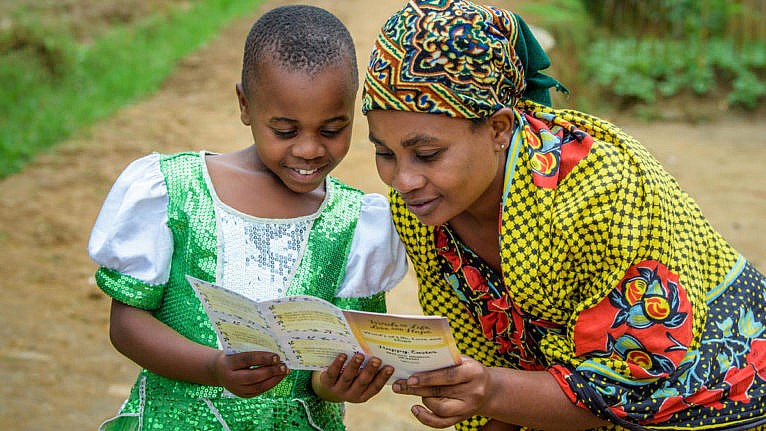 Alliance, a recently sponsored 9-year-old girl from Rwanda, and her mother read through a note from her sponsor. 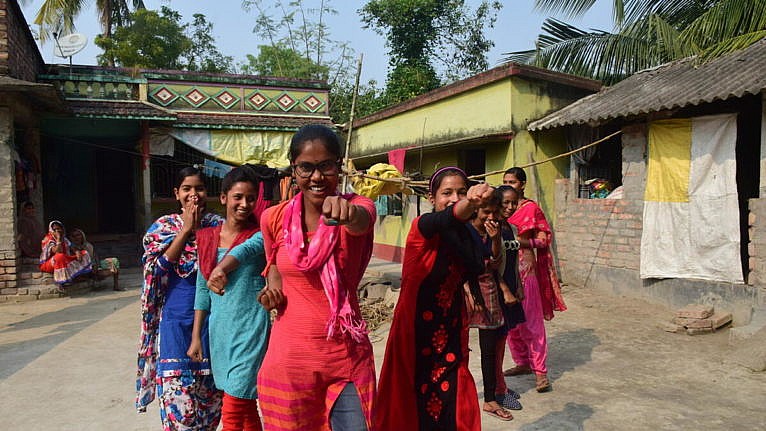 Adolescent girls in India are taught to protect themselves and their peers from traffickers through a community group. The groups also detect incidents of trafficking, child marriage and other gender-based violence and take direct action to stop them.

“The pandemic has been and still is really pulling back the curtain on inequalities in the world,” says Professor Phillips. “It shouldn’t be a surprise to anyone to learn that low-income countries were hit a whole lot harder than higher-income countries. The speed of the [vaccine] rollout makes this undeniable, and mindful donors are watching. I hope we’ll come out of this situation better recognizing and acknowledging the needs of communities and countries outside our own.”

Tarver concurs: “Sometimes these things feel a world away, especially now when things are hard everywhere. But now that Canadians can see the end of the tunnel, we shouldn’t forget that other communities and countries are not so lucky,” he says, citing India and the Democratic Republic Congo as countries that could particularly use your help. “We need to recognize that no one is safe until all of us are safe,” says Tarver, “and the Pandemic isn’t over until it’s over for all of us.”

Visit WorldVision.ca to join the movement to help reach World Vision’s goal of getting 1,000 girls sponsored by International Day of the Girl on Oct. 11.