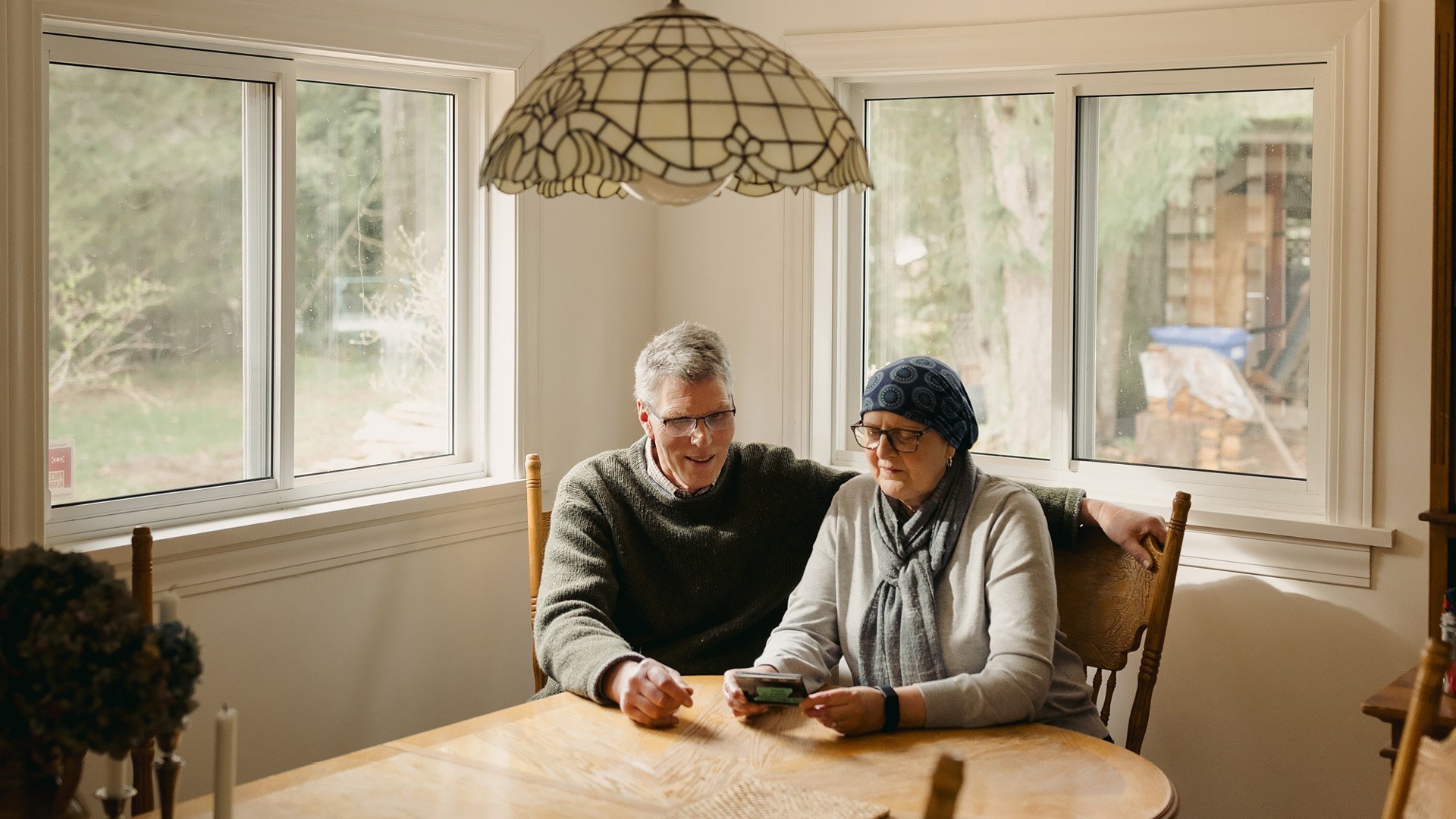 It takes a village to stand up to cancer

Thanks to a tight knit, loving and multi-disciplined support network, Helen Catherall is never alone in her fight against metastatic basal cell carcinoma

On Vancouver Island, it sometimes feels like the problems of the world can’t reach you. Helen Catherall is a third-generation Islander, and she can’t imagine living anywhere else. The tranquil cottage life is in her bones. And, over the course of 40 years of marriage, it has found a thorough convert in her husband Robin, who’s originally from the mainland. They’ve raised three children together on the island, surrounded by verdant woodlands.

Today, both Helen and Robin are retired. They choose to split their time between their home in Parksville and their cottage in Cobble Hill. And although their horse-keeping days are now behind them and their menagerie has dwindled to a few chickens and a single sweet old retriever named Charlie, there are few other places they’d rather be. But even in this sanctuary, adversity can rear its ugly head. 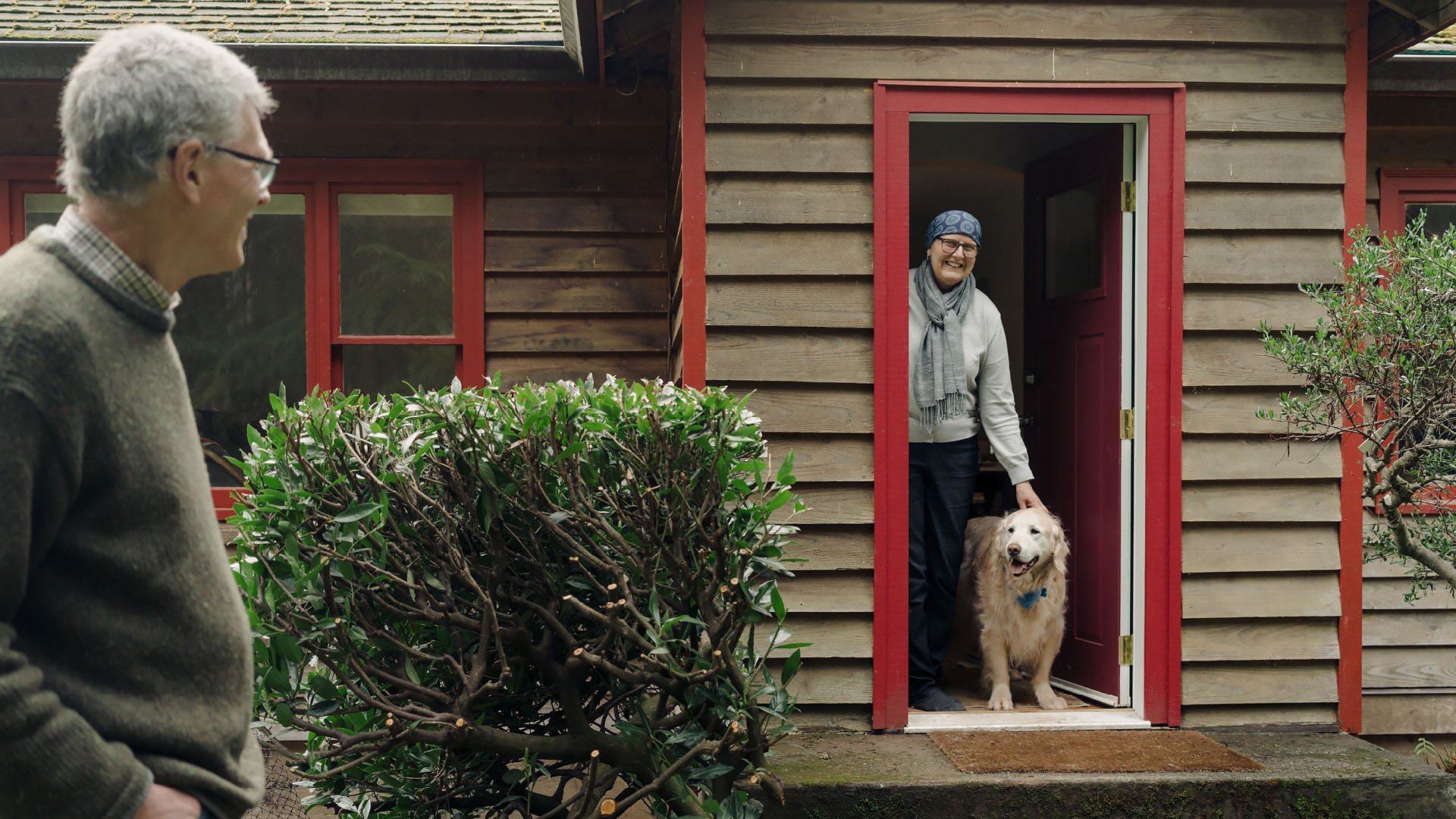 Almost a decade ago, in 2013, Helen found a spot along her hairline that worried her.

Two different doctors told her it was nothing to worry about before a dermatologist recognized it as cancerous and had it removed. And that was that, she was assured. Most skin cancers are easily dealt with and life goes on. But, based on her pathology report, Helen had a feeling that this ordeal was far from over.

“They said it was no problem,” recalls Helen. “Nothing to worry about. But I have a health care background, and I was concerned by the reading I was doing. No one was taking me seriously.”

Two years later, she and Robin were travelling in Italy, taking in the sun from Sicily to Tuscany, when a lymph node in her neck started giving her trouble. Though she hoped it was just a reaction to the heat, deep down she was privately convinced that the cancer had returned. Upon her return to Canada, she was once again told not to worry about it. Helen found herself seeking a second opinion from a radiologist across the strait in Vancouver, where her fears were confirmed. 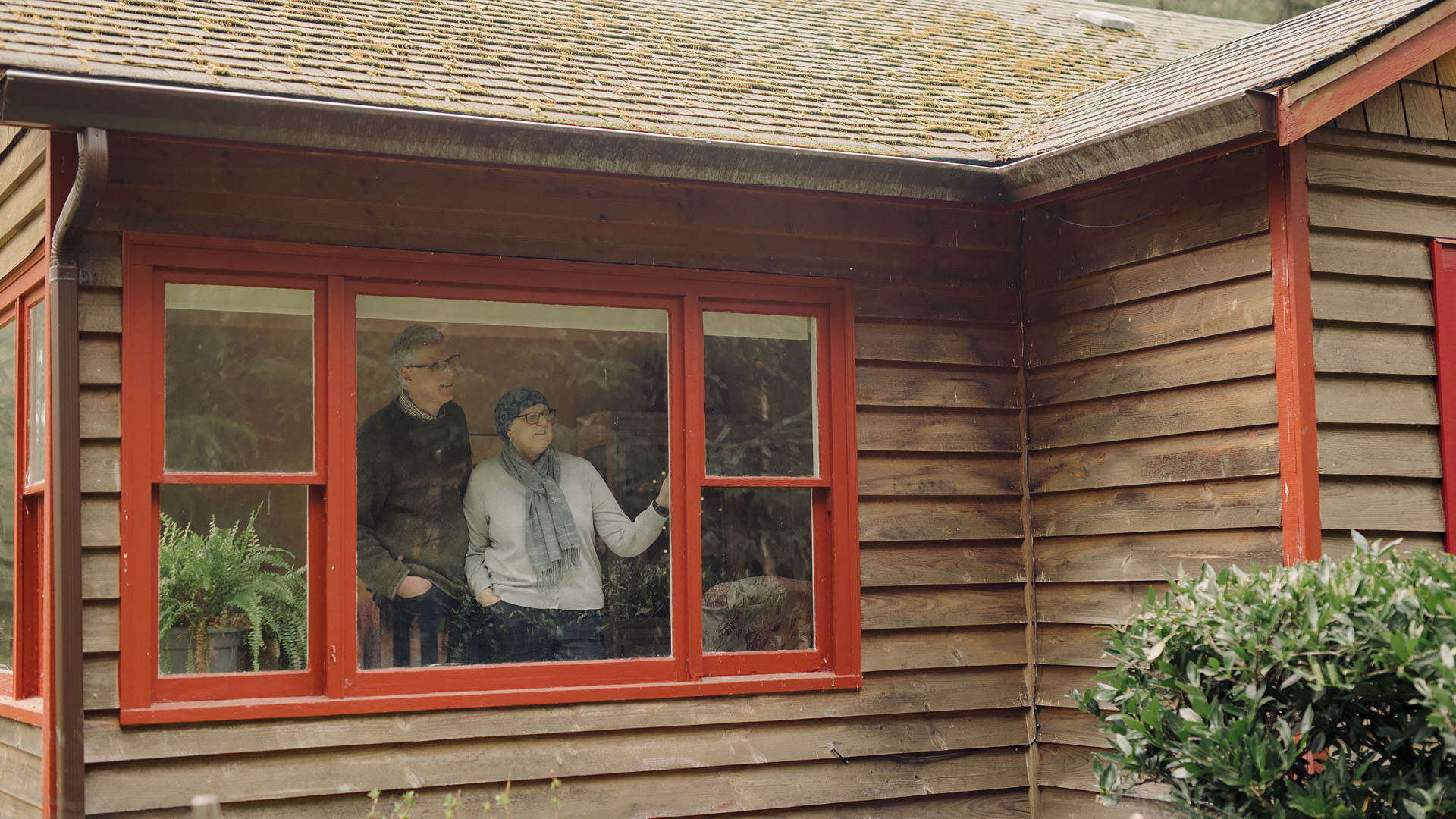 A common diagnosis with a rare outcome

Thirty-five sessions of radiation later, Helen returned to Vancouver Island, where she requested to have a medical oncologist follow her progress. That’s when Dr. Vanessa Bernstein from the BC Cancer Agency entered the picture and the tenor of the conversation began to change.

In fact, the overwhelming majority of non-melanoma skin cancers, particularly basal cell carcinomas like Helen’s, are extremely treatable. They’re precisely the sorts of cancer that modern medicine has well in hand. But, if you’re among the remarkably rare exceptions to the rule, the story can become quite different.

“Basal cell carcinoma, in general, is the most common form of skin cancer in the world,” says Dr. Bernstein. “One in eight Canadians will develop it during their lifetime. But the majority of the cases of basal cell cancer won’t be locally advanced or metastatic. These 99 per cent of basal cell cancers will be treated with local options like surgery or radiation, and they’ll be cured most of the time by that. Helen’s is an unusual case because her advanced basal cell cancer is quite a rare form of what’s usually a slow-growing, common skin cancer. It came back after radiation and it kept recurring after treatment, which is when we knew we were in trouble.” 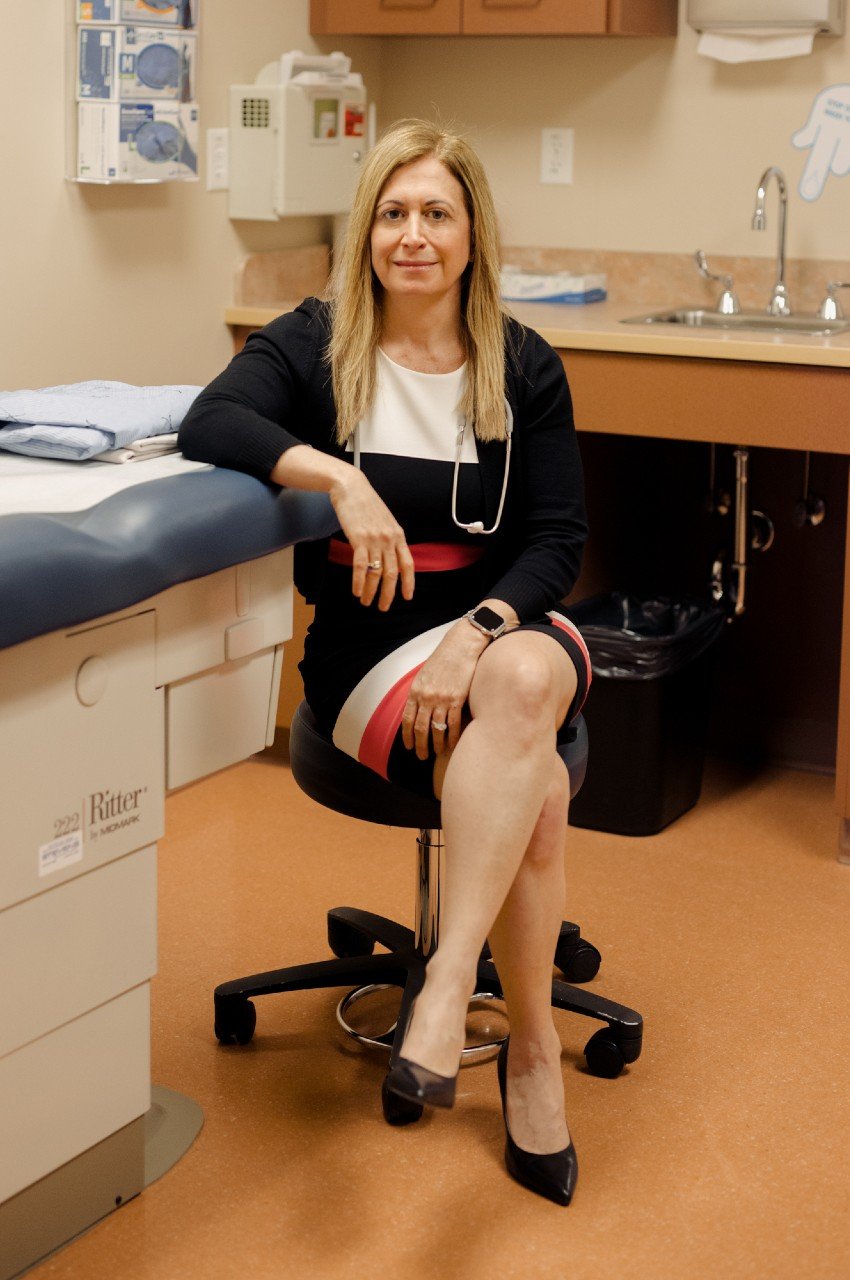 Dr. Vanessa Bernstein, photographed at the BC Cancer Agency in Victoria, BC (photograph by Taylor Roades).

Helen’s cancer had become metastatic. It was spreading to distant sites and unrelated organs. Among basal cell carcinomas, that’s almost unheard of—a point that Dr. Bernstein underscores more than once. When Helen asked for an honest assessment of what this meant for her future, the answer was blunt and low on hope.

“When cancer becomes metastatic, the focus shifts to disease control and no longer cure,” says Dr. Bernstein. “Most of the time, if it has spread to other organs, it’s no longer curable with treatment, so we try to control it for as long as possible and help people have the best quality of life during that time.”

A sombre hue suffused the idyll of island life. Was the family home now a hospice? Not if Helen had anything to say about it. 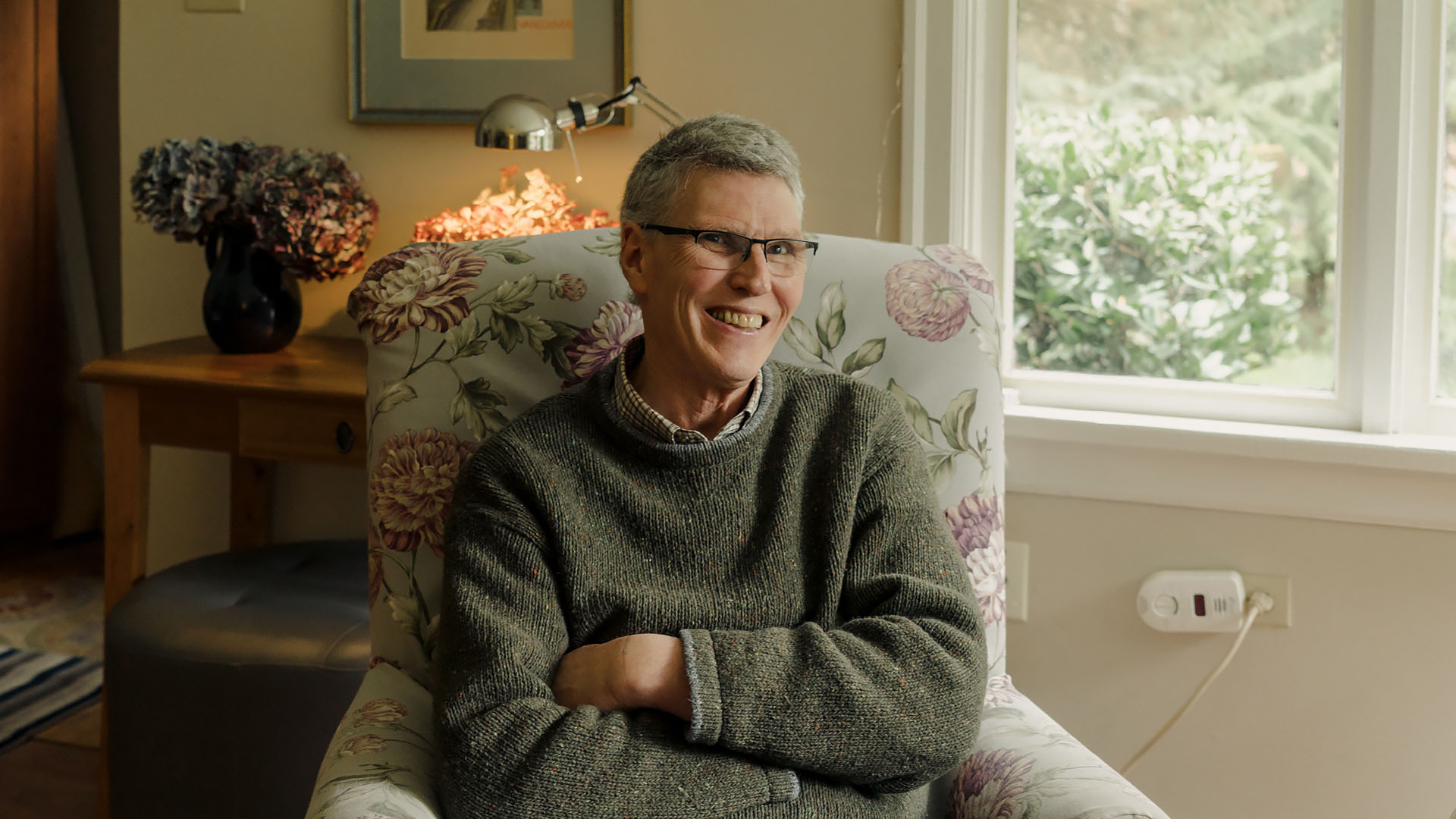 Helen took a long look at the prognosis and decided it wasn’t something she was yet ready to accept. She appreciated the frankness of the projections, but she knew that there were more options if she was willing to seek them out. And she was.

“I don’t think I’m unrealistic in wanting to fight,” Helen says. “You sometimes perhaps might get labelled as unrealistic, but I think it’s definitely worth pursuing all the options that are out there. But, with a rare cancer diagnosis, the options aren’t going to come looking for you. I truly and firmly believe you have to go looking for them.”

The family’s Cobble Hill property became a battle bridge, and the call went out for the crew to man their stations. The skeleton team of Helen, Robin, and her care team was about to grow dramatically. “I have an incredible family,” Helen says, “and each family member has sort of adopted a role whether they wanted to or not.” 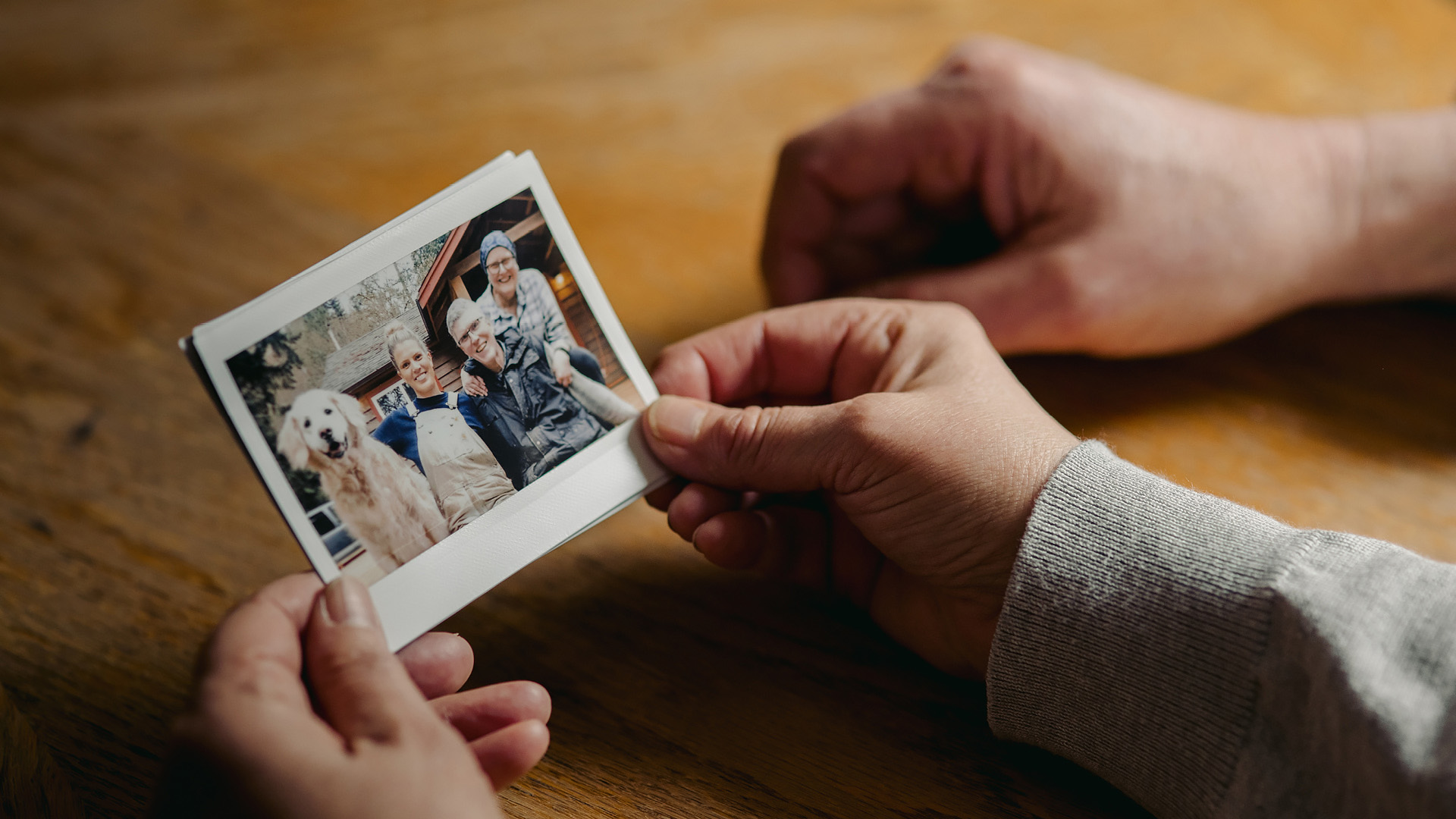 Helen’s sister Joan, a natural researcher who’s at home deep in the pages of a medical journal, tracked down all the experts who were focusing on metastatic basal cell carcinoma (mBCC). That led to a connection with a clinical researcher in California on the forefront of experimental treatments. Meanwhile, Helen’s son Owen was uncovering an entire network of highly-informed and motivated patients in an unlikely corner of the internet.

“I didn’t even know that there was a site called Reddit,” laughs Helen. “There are very few people who have this cancer and they’re usually quite elderly, 80 or 90 years old. So who would have thought Reddit would be the place to find them? But Owen found this guy in Florida who had mBCC on there and asked if I could contact him.” 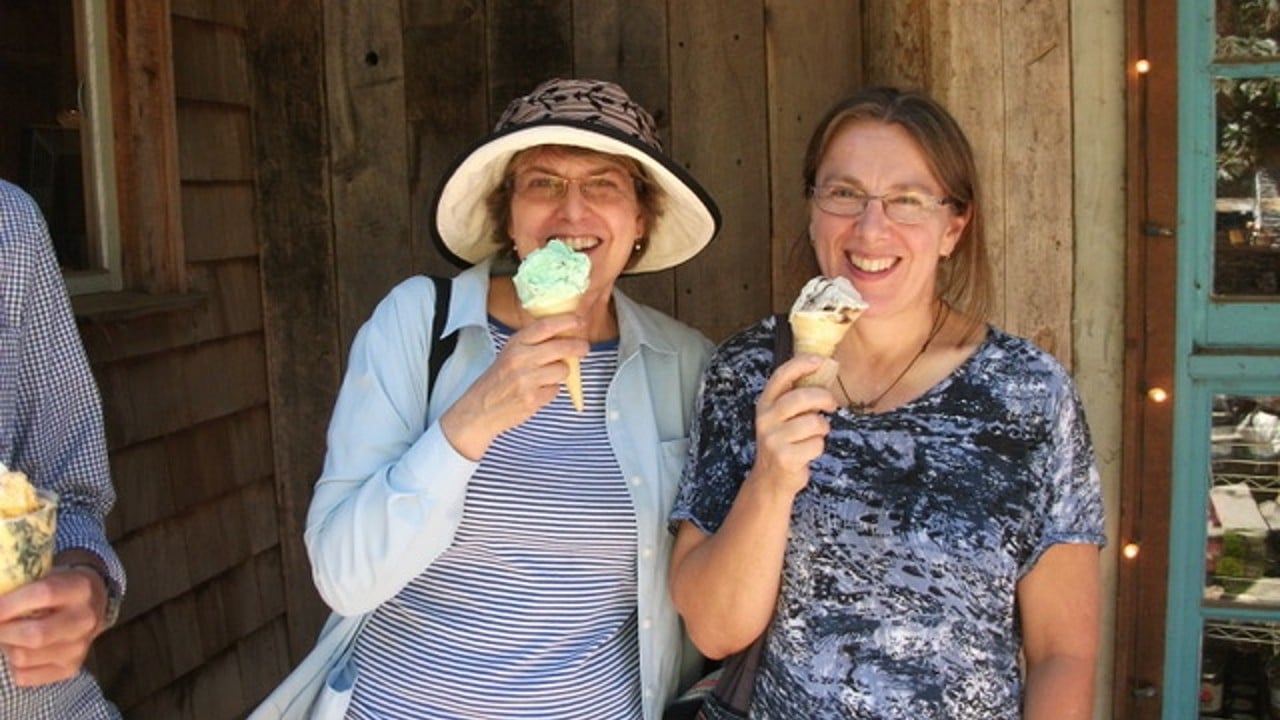 Helen and her sister, Joan, enjoying an ice cream at a local market pre-COVID (submitted).

The Floridian was named Steve and he was quick to befriend Helen. Steve has since passed away, but not before sharing his hard-won wisdom and insights on the battle ahead with Helen’s burgeoning band of fighters.

“Steve was different,” says Helen. “He was a don’t-give-up and don’t-lay-down kind of guy. He gave me so much good and original advice. Always advocate for yourself, because the general population has no idea about this. And never stop searching.”

Through Dr. Bernstein, Helen also connected with Save Your Skin Foundation, which has been instrumental in providing her with both practical and moral support. “They’ve been absolutely fabulous,” says Helen. “They’re very grassroots. They’ve provided information, positivity, and strong advocacy. They’ve encouraged me to keep asking questions, whether I like the answers or not.” 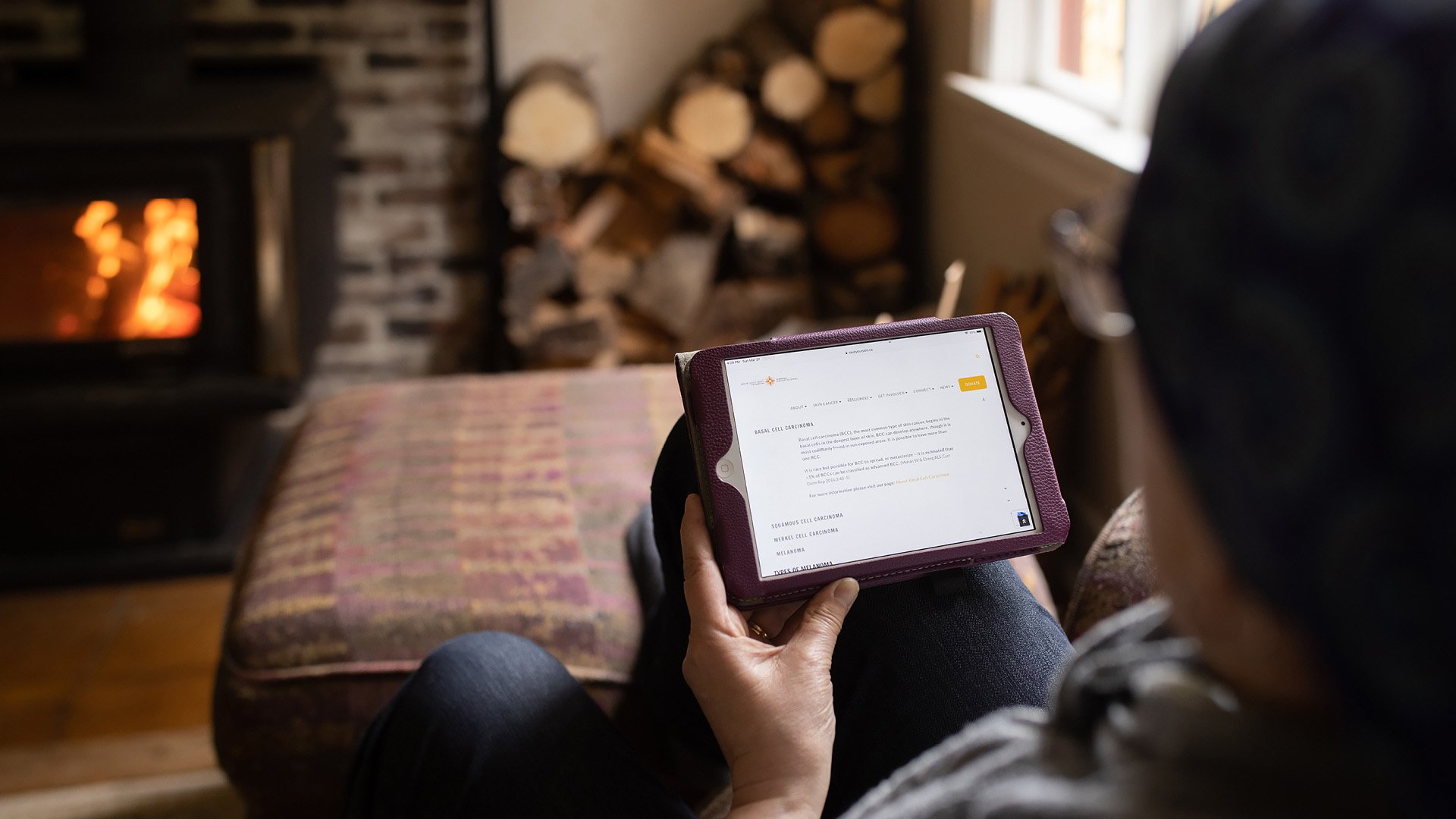 Rounding out the team are Helen’s daughters Erin and Marla and their partners Kris and Tor, who have the essential task of keeping her grounded through all this. “They’ve been great,” Helen says. “They’re 150 per cent behind everything we do and they keep me positive. When we get together as a family they remind me that this cancer battle is only one part of my life, and it’s not the most important part.”

As Helen and her support network continue to fight, they’re leaving no stone unturned in the quest for more new options and a brighter future. Helen has pursued clinical trials and new treatments, and continuously advocates for better access to these treatments. Recently she finished her second round of chemo and remains confident that her body’s response will continue to be positive.

She’s still loving life on Vancouver Island, and she’s still spending her time enjoying the outdoors with Robin and Charlie, making the most of each and every day. “I think that Helen’s greatest forte is probably her positivity,” says Robin. “Cancer forces you to zero in on the celebration of the moment rather than worrying about issues way down the line. If it’s a great day, if the sun’s shining, then go out and enjoy it, and don’t worry about the leaky roof on your house, so to speak. Perspective is the surprisingly positive outcome of this experience.” 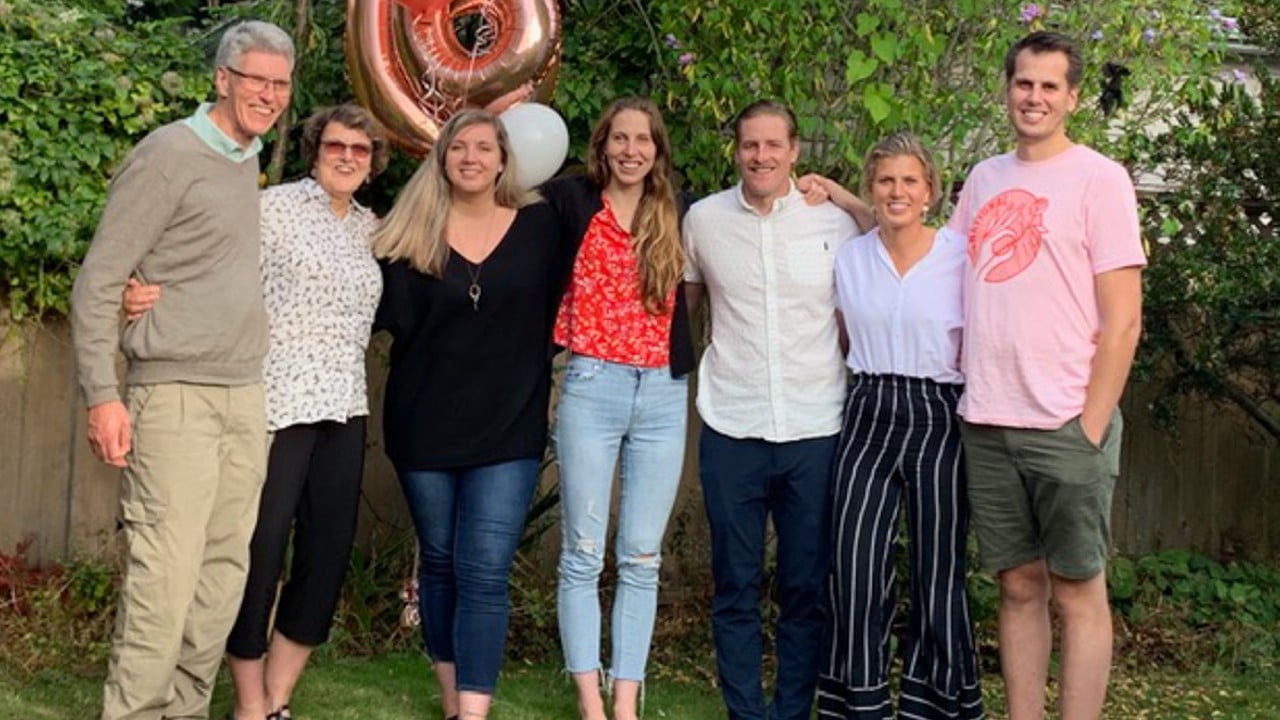 Helen and Robin with son Owen, daughters Erin and Marla, and partners Kris and Tor (submitted).

Because, in the end, nobody knows what the future holds—not for Helen and not for anyone. Cancers and other illnesses that once had no treatment are seeing new therapies developed every year, and no one knows which will be next. And, though the book on mBCC is far from closed, progress continues to be made.

Lessons from the frontlines

“The good news is that, in the last decade, there are now much more effective therapies,” says Dr. Bernstein. “New drugs that are effective in treating these advanced cases are coming out. They’re making a difference in terms of patient quality of life and survival. Of course, we always hope that there will be more advances to come in the future.”

Although Helen is most certainly not one to look back with anger or regret, it’s hard to disregard the longer-than-optimal pathway to diagnosis that she encountered, even after all these years. She encourages Canadians to trust their instincts, and to seek the opinion of a doctor or dermatologist if they sense that a skin spot may be problematic. This includes applying a healthy dose of persistence, if and when deemed appropriate. 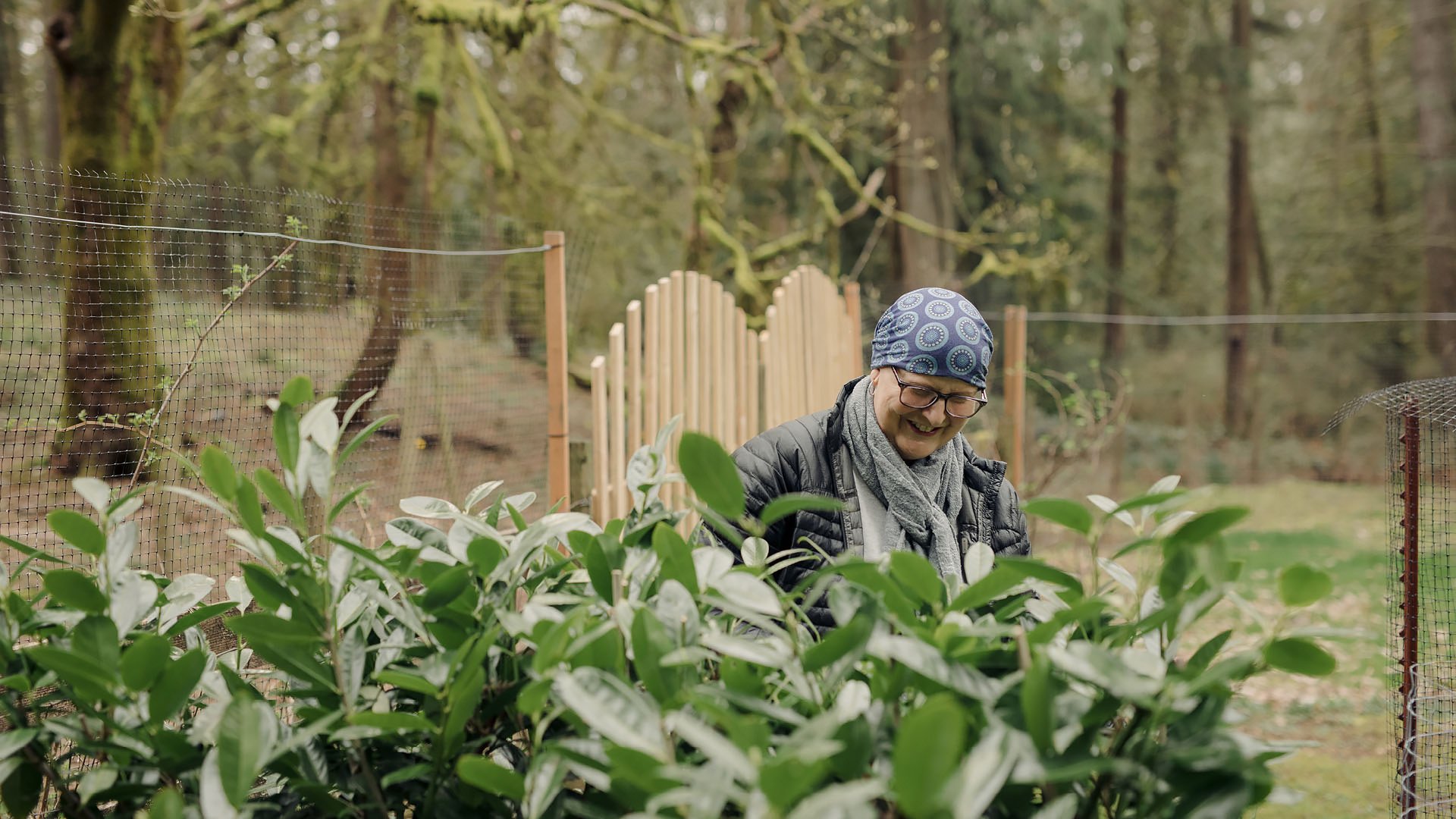 Now, Helen pursues her future with this same persistence, and remains focused on being here to enjoy many more changes of season on her beloved Vancouver Island. “We’re looking forward to spring and summer,” Helen says, looking across the dining room table at Robin. “We’re looking forward to camping and being with friends and visiting family in Vancouver. We’re staying positive and we don’t plan on giving up.”

Save Your Skin Foundation (SYSF) is a patient-led not-for-profit organization dedicated to the fight against non-melanoma skin cancers, melanoma, and ocular melanoma through education, advocacy, and awareness initiatives across Canada. SYSF works to improve equal, timely access to treatment.