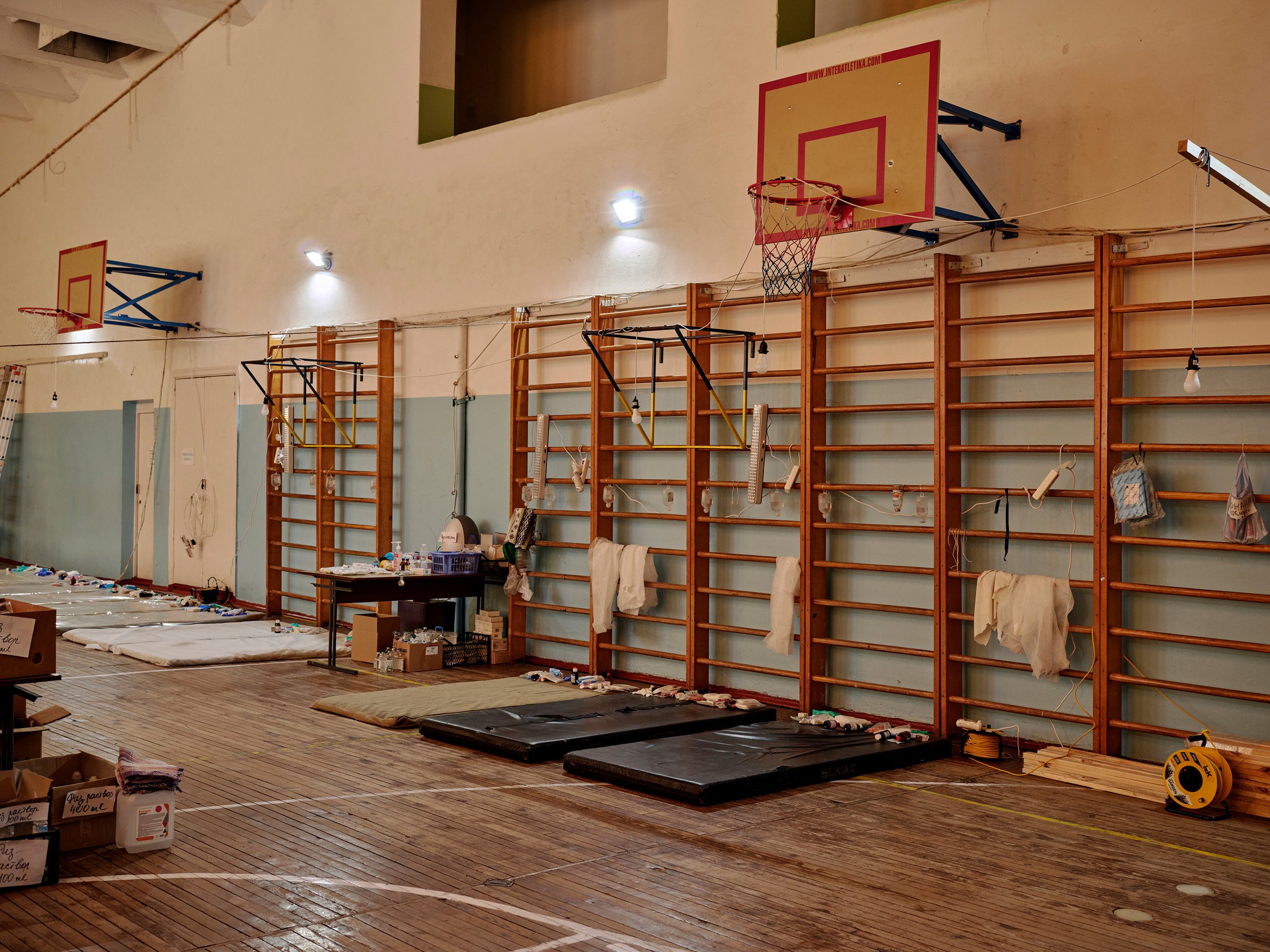 A school gym is converted into a makeshift field hospital, March 8, 2022. (Photograph by Philip Cheung)

Scenes from the war in Ukraine

Like the rest of the world, the Canadian photographer Philip Cheung spent weeks anxiously watching the events leading up to the Russian invasion of Ukraine. “Seeing the relentless barrage of cities and the bombing of innocent civilians made me want to document the reality on the ground. This could be one of the most important conflicts of our generation,” he says. On March 4, he left his home in Los Angeles in a blur. He packed lightly, save for a helmet and body armour. Cheung flew to Krakow, then hitched a ride with a volunteer who was shuttling refugees back and forth from the Ukrainian border. By March 6, he was crossing into a war zone on foot.

This wasn’t Cheung’s first time shooting in a war: he’s photographed the Israel-Palestine conflict, and gone twice to Afghanistan, embedding with Canadian troops in Kandahar in 2009 and the Americans in 2010. Ricocheting between Kyiv, Lviv and smaller neighbouring towns this spring, Cheung saw, and captured, a lot. Devastation, certainly, but it was the solidarity of citizens that sticks with him. “This war has brought people closer together,” he says. “I met people who were turned away from the army, so they joined the Red Cross, volunteered at field kitchens, made Molotov cocktails, dug trenches and filled sandbags.” Cheung says the overnight trains he took on his journey were often packed with Ukrainians returning home from abroad, ready to fight. “It’s difficult seeing all the senseless violence, these lives displaced and destroyed,” Cheung says. “But it’s important to document and inform people with our photographs.”

Here are some of the powerful scenes he captured. 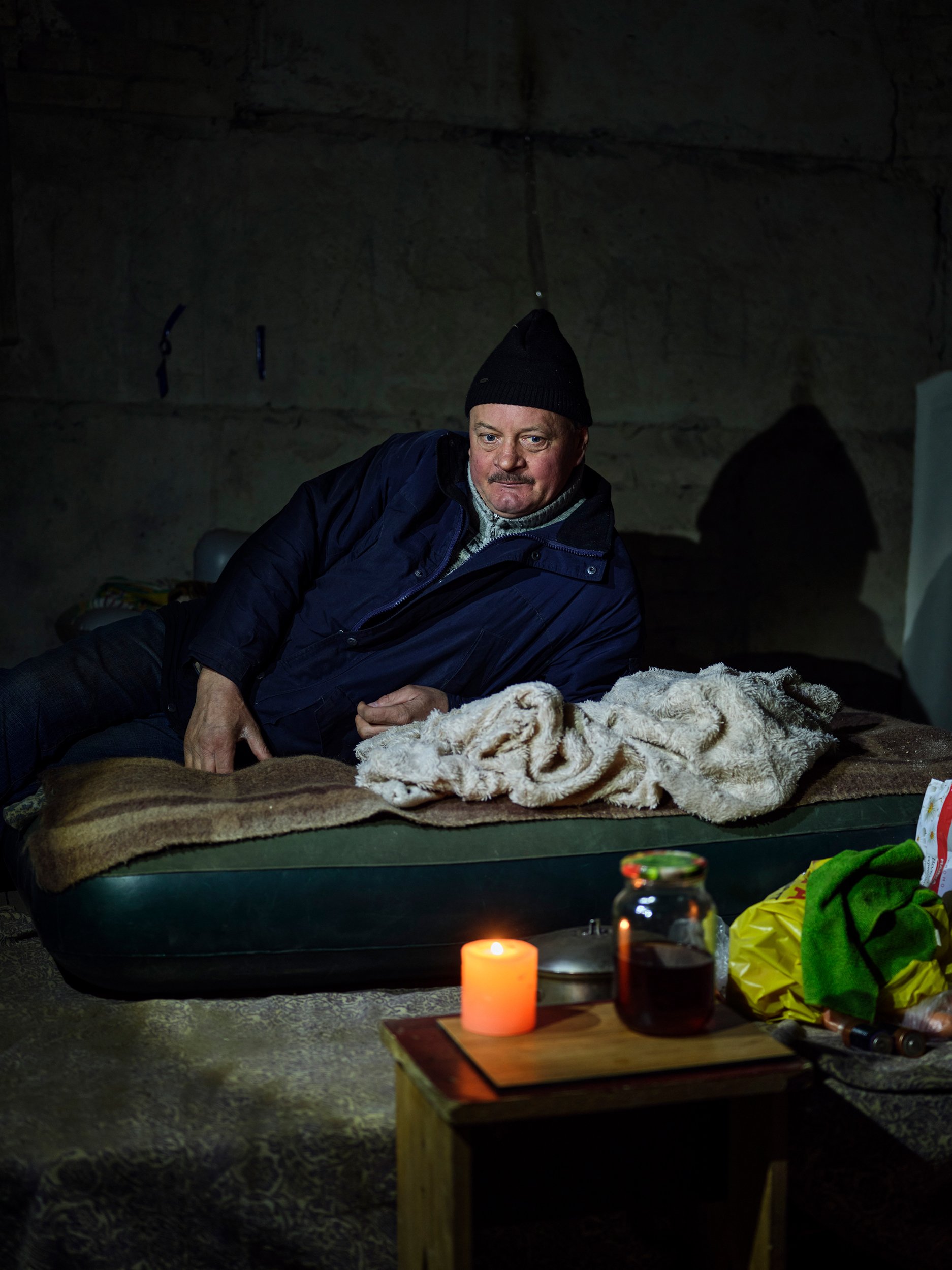 “I noticed about 15 people gathered around a campfire while I was walking through this residential neighbourhood. You could hear gunfire, and there was still smoke in the air from exploded artillery rounds, but here they were, cooking dinner. I told one woman I was a photographer, and she walked me down into a bomb shelter to show me her living situation: a cooking area, supplies and no light, except for a flashlight and candles. This gentleman, Vasiliy, had just woken up from a nap. They’d been living there for two weeks or so.” (Photograph by Philip Cheung) 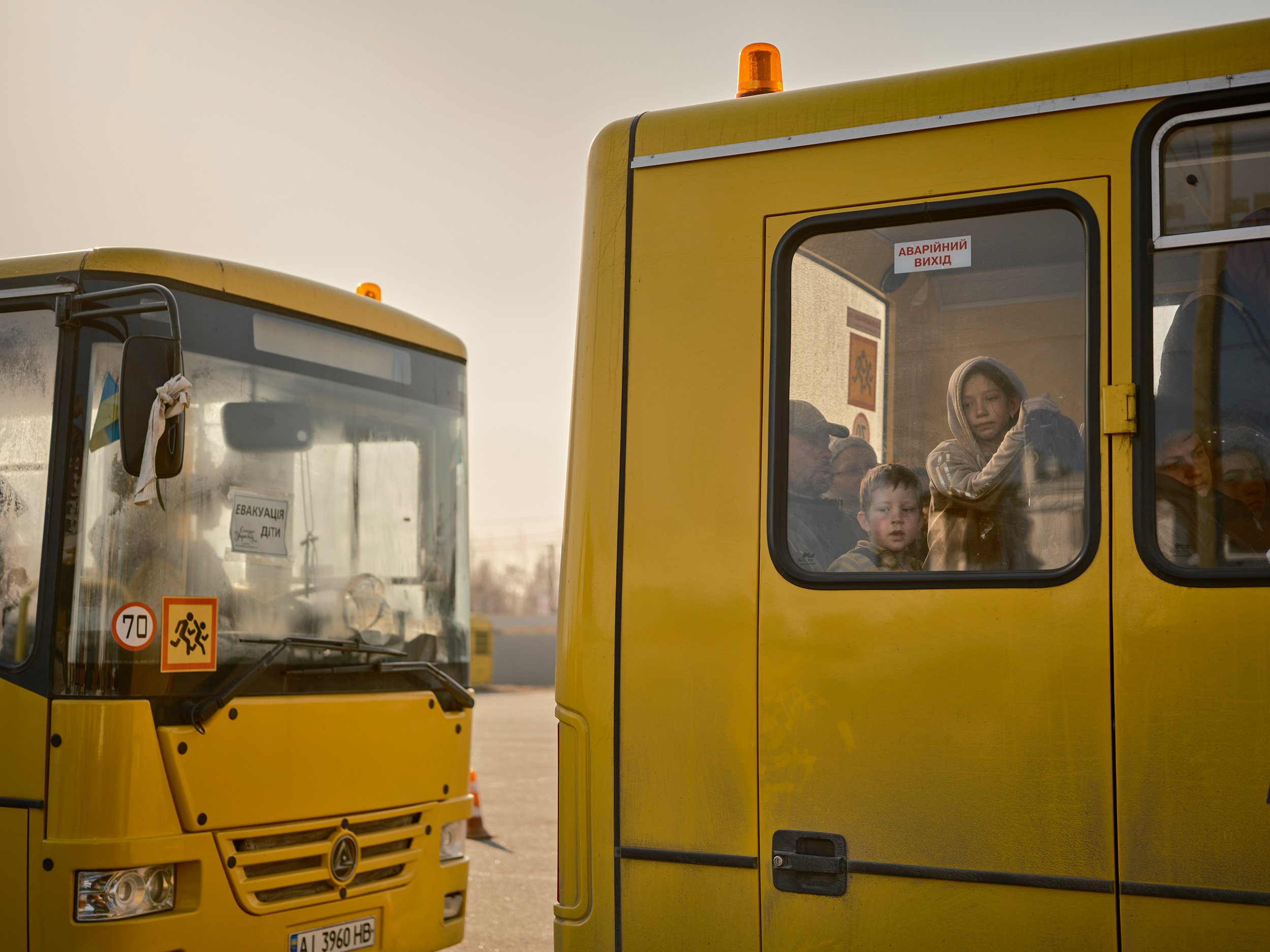 “A group of evacuation buses arrived from Bucha. There were about seven in total, and 10 per cent of the passengers were children. Before they disembarked, each person had their papers checked by police officers to make sure they weren’t spies. There have been a lot of problems with Russian saboteurs posing as internally displaced persons, getting into the cities and causing havoc. After they were cleared, passengers could get hot meals and warm clothes in the parking lot, then board buses to cities where their families lived.” 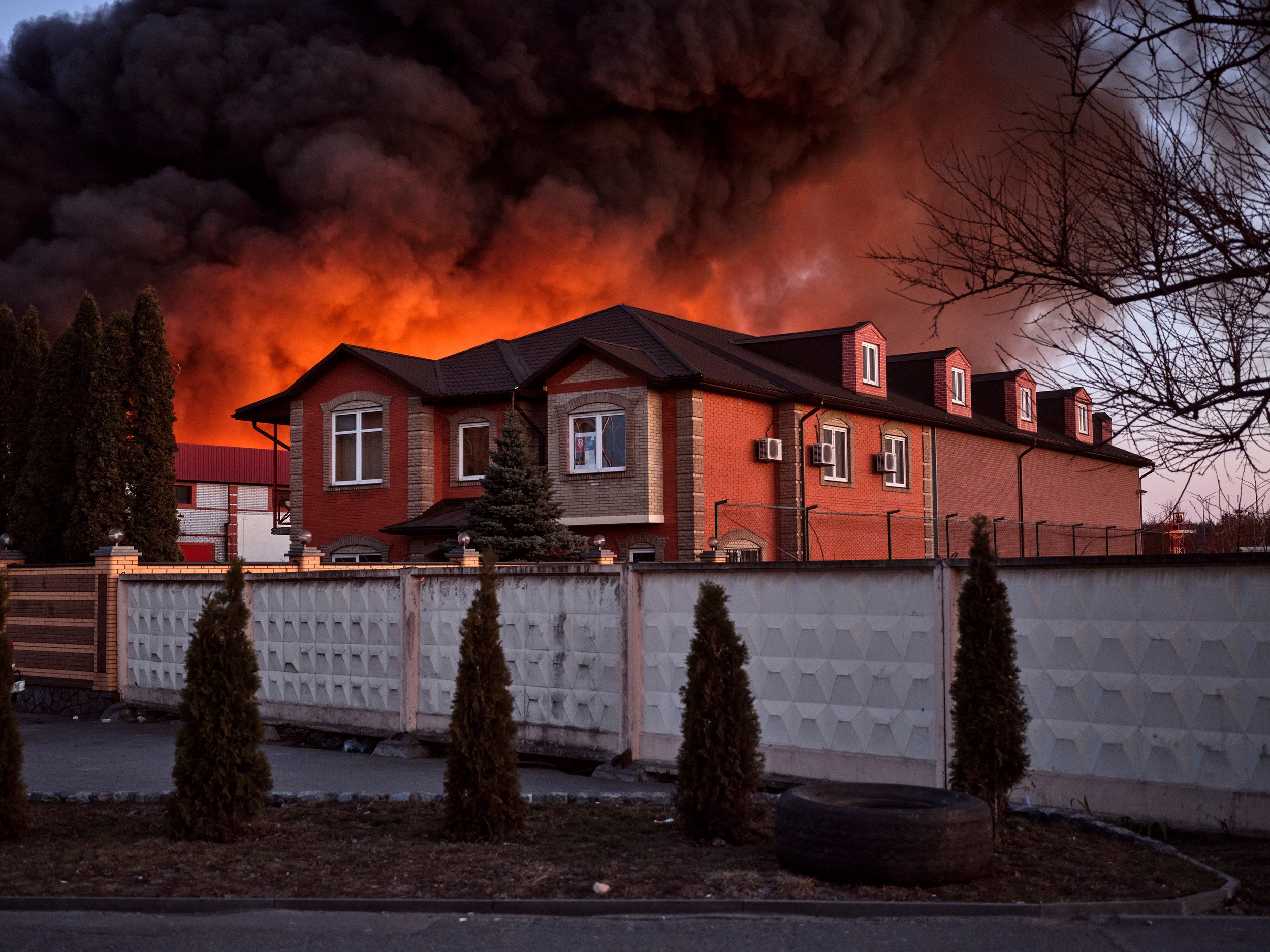 “People on the ground said they saw an aircraft or a drone dropping munitions moments before an explosion. I visited the site to shoot the effects of the bomb blast up close. I didn’t notice the heat, but that could have been the adrenaline. The fire was in a warehouse, and it lasted for a couple of days before it was finally put out. It left behind a huge black cloud that stretched across a large part of the city.” 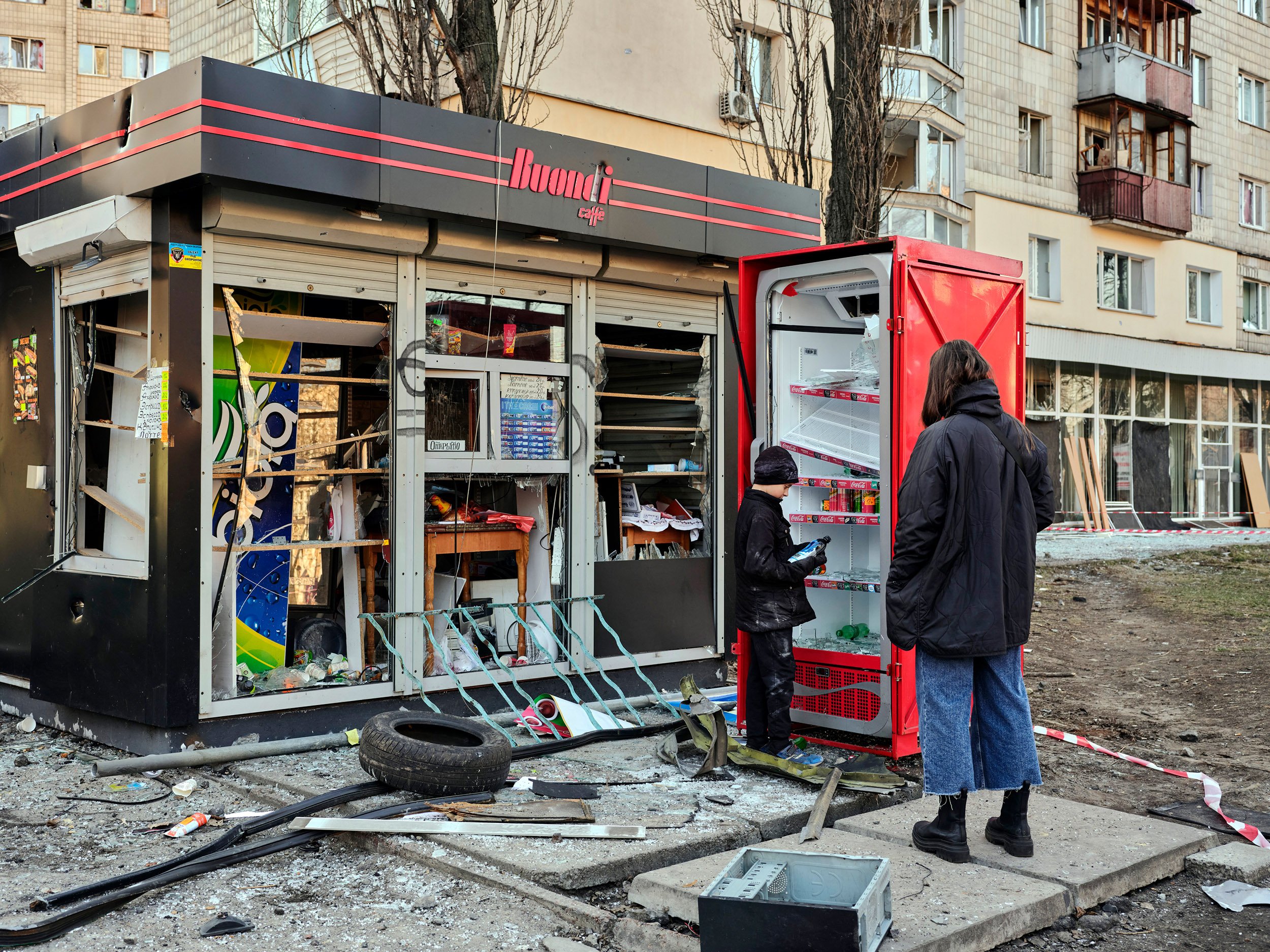 “The shockwave and shrapnel from the bombing of a nearby apartment complex destroyed this cafe. The media were looking at the apartment building, but I was watching this mother and son. Nobody else was taking photos of them. They were just casually inspecting the contents of the fridge. The civilian population has sort of normalized the constant bombardment. During the day, you see people shopping or enjoying a sunny day in a park while air-raid sirens are going off.” 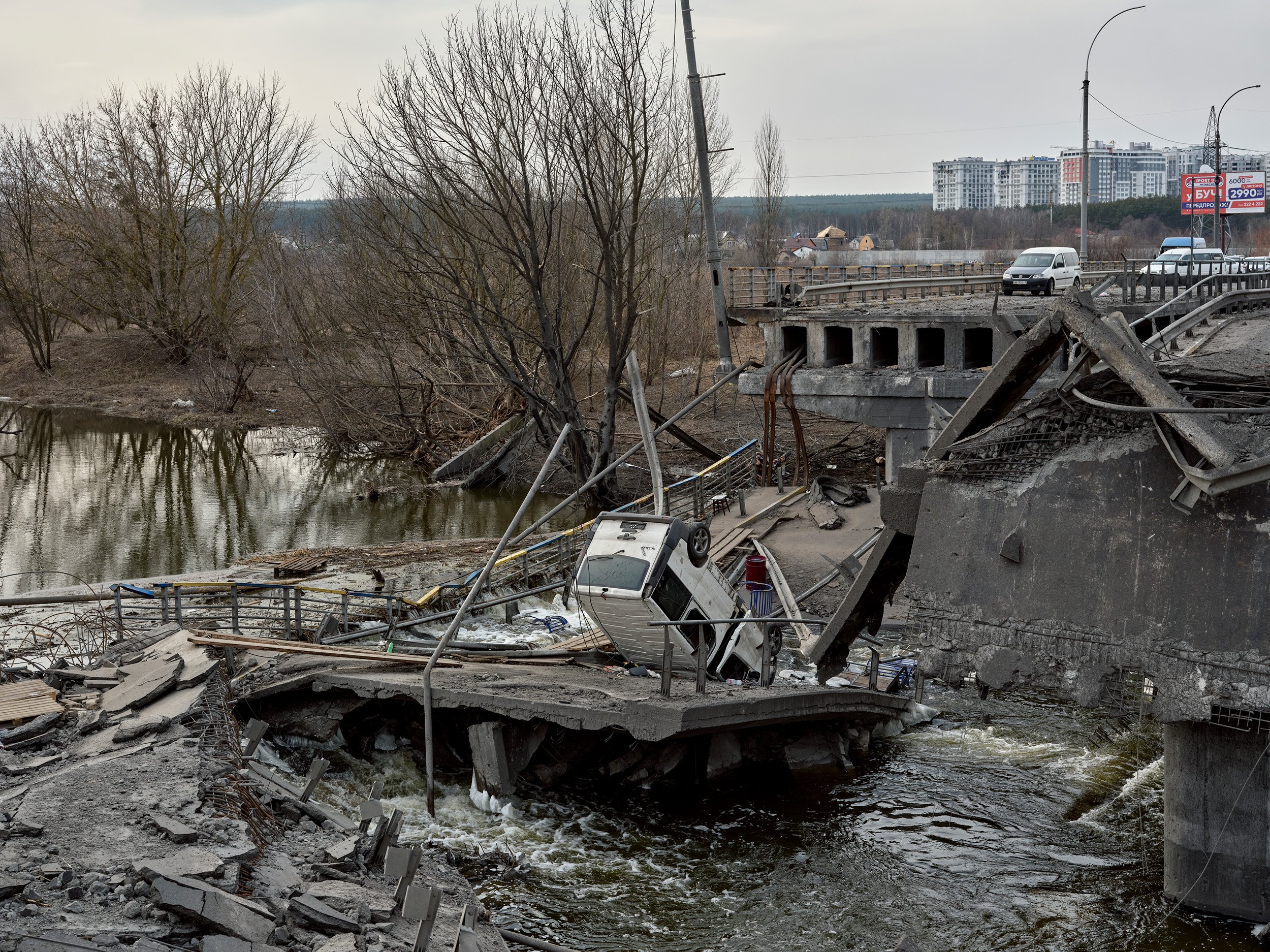 “This was one of my first stops. In the early days of the war, Russian forces were advancing so quickly that the Ukrainian engineers responsible for planting explosives on the bridge didn’t even have enough time to detonate them remotely. A young Ukrainian soldier sacrificed himself, blowing up the bridge while he was on it to save his unit and the city.” 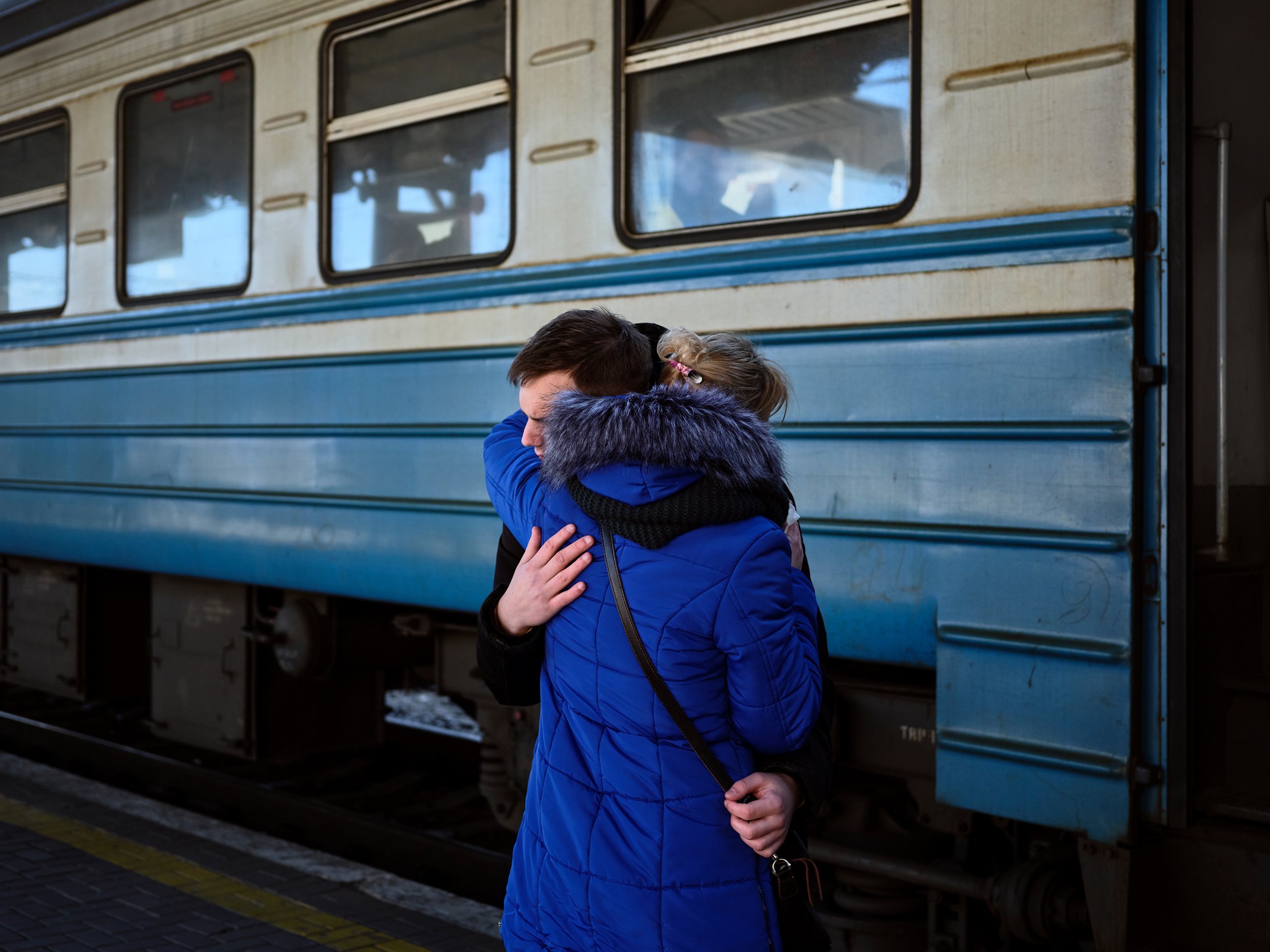 “This man was boarding an evacuation train headed for Lviv. He appeared to be of military age, so I assumed he was going to join the police or the Territorial Defence Forces. I found it odd that his mother was staying in Kyiv. They were the only two people left on the platform after everyone else had boarded. After this shot, he climbed onto the train and cried and waved to her until the doors closed.” 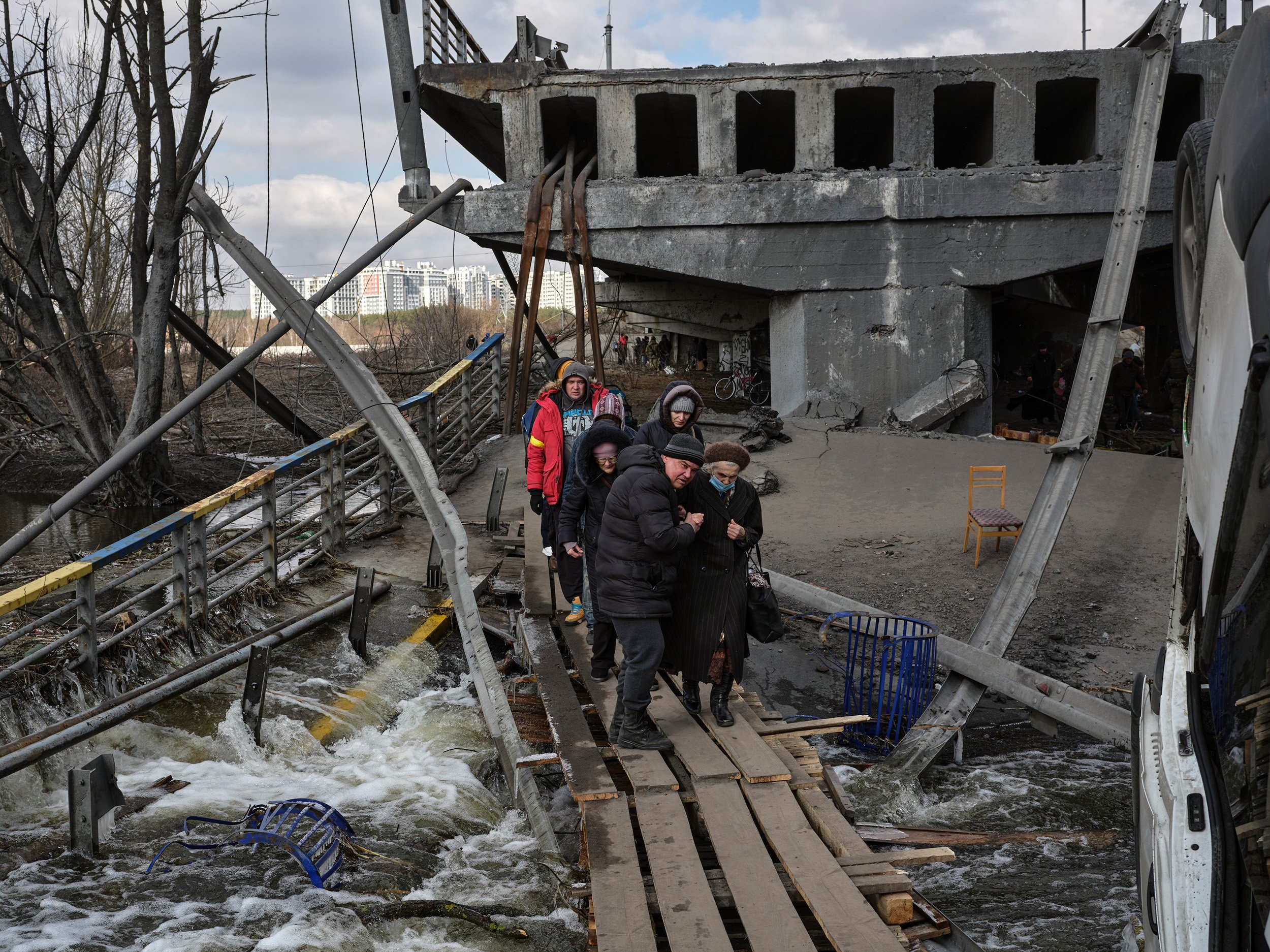 Civilians evacuate Irpin by crossing the deliberately destroyed bridge over the Irpin river. 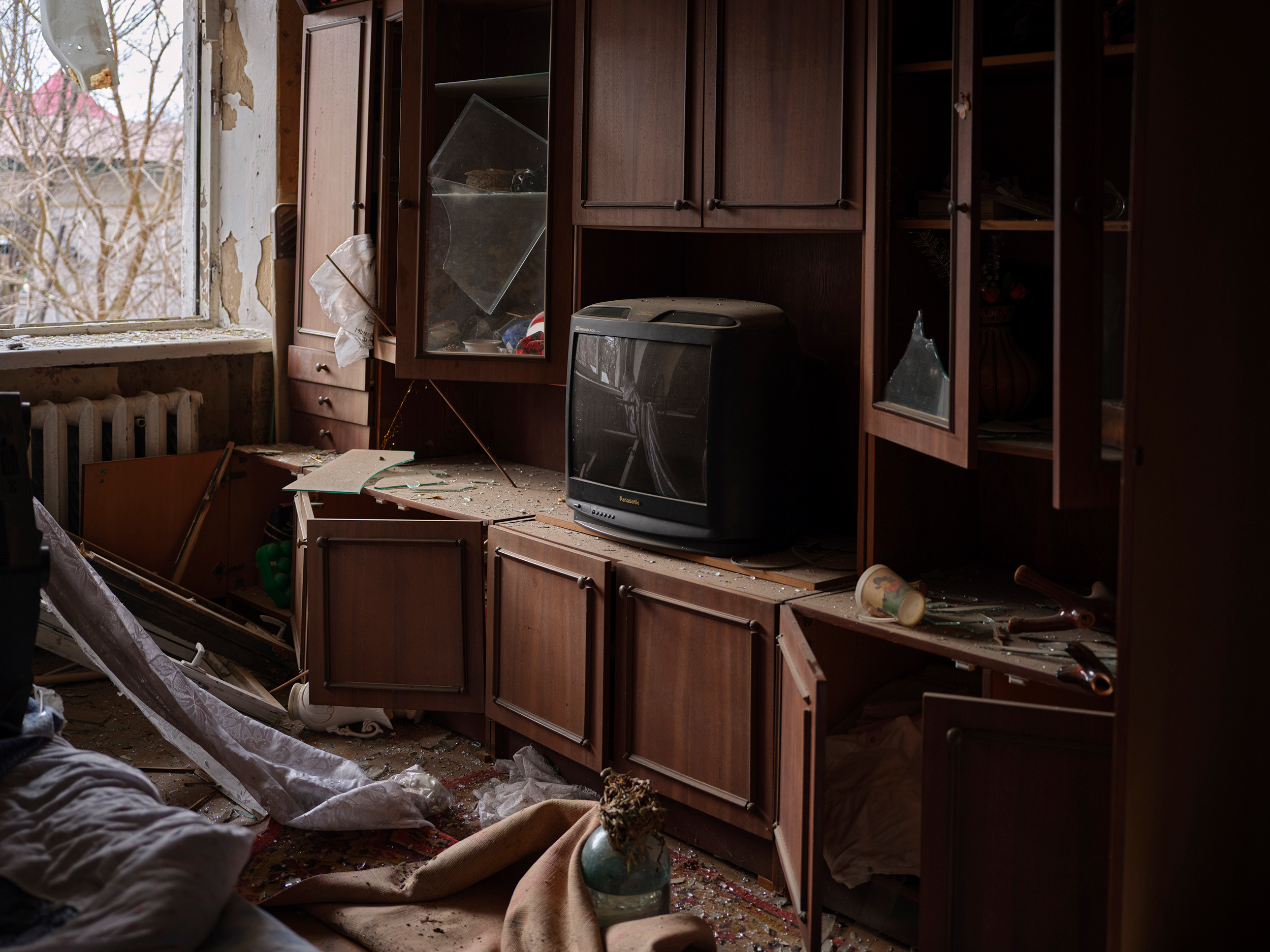 The interior of an apartment building that was hit by a Russian missile during the initial days of the invasion in Ukraine. Three civilians died in the blast. 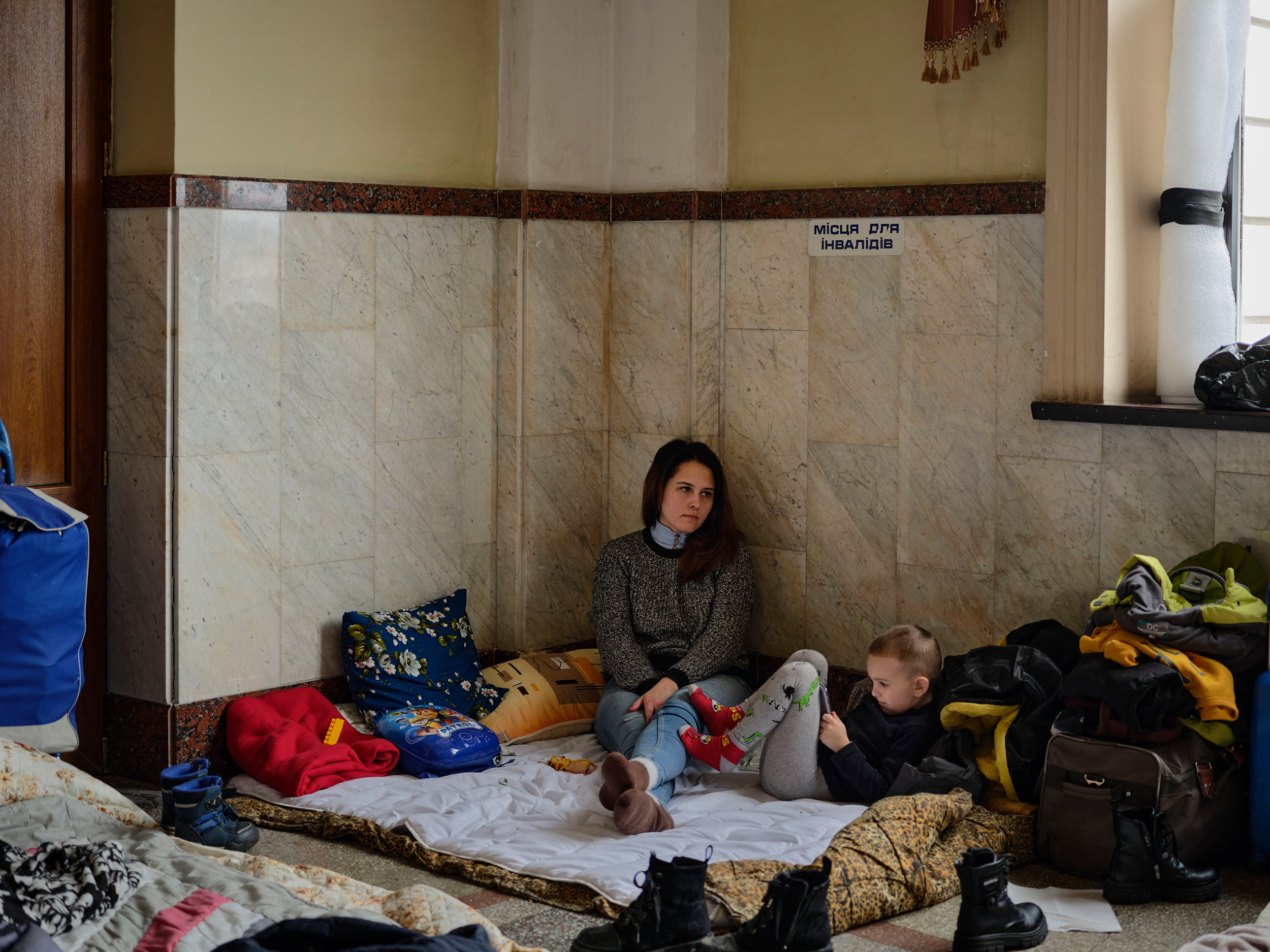 “There’s an area in the Lviv train station reserved for mothers and children so they can relax while waiting for their evacuation trains to Poland. That’s where I met Anna and her four-year-old son, Herman. They’d fled Brovary, a town just east of Kyiv. I spoke to Anna briefly through a translator. She explained that she was scared and just wanted to make sure that she and Herman would be safe. He was watching a cartoon on her cellphone.” 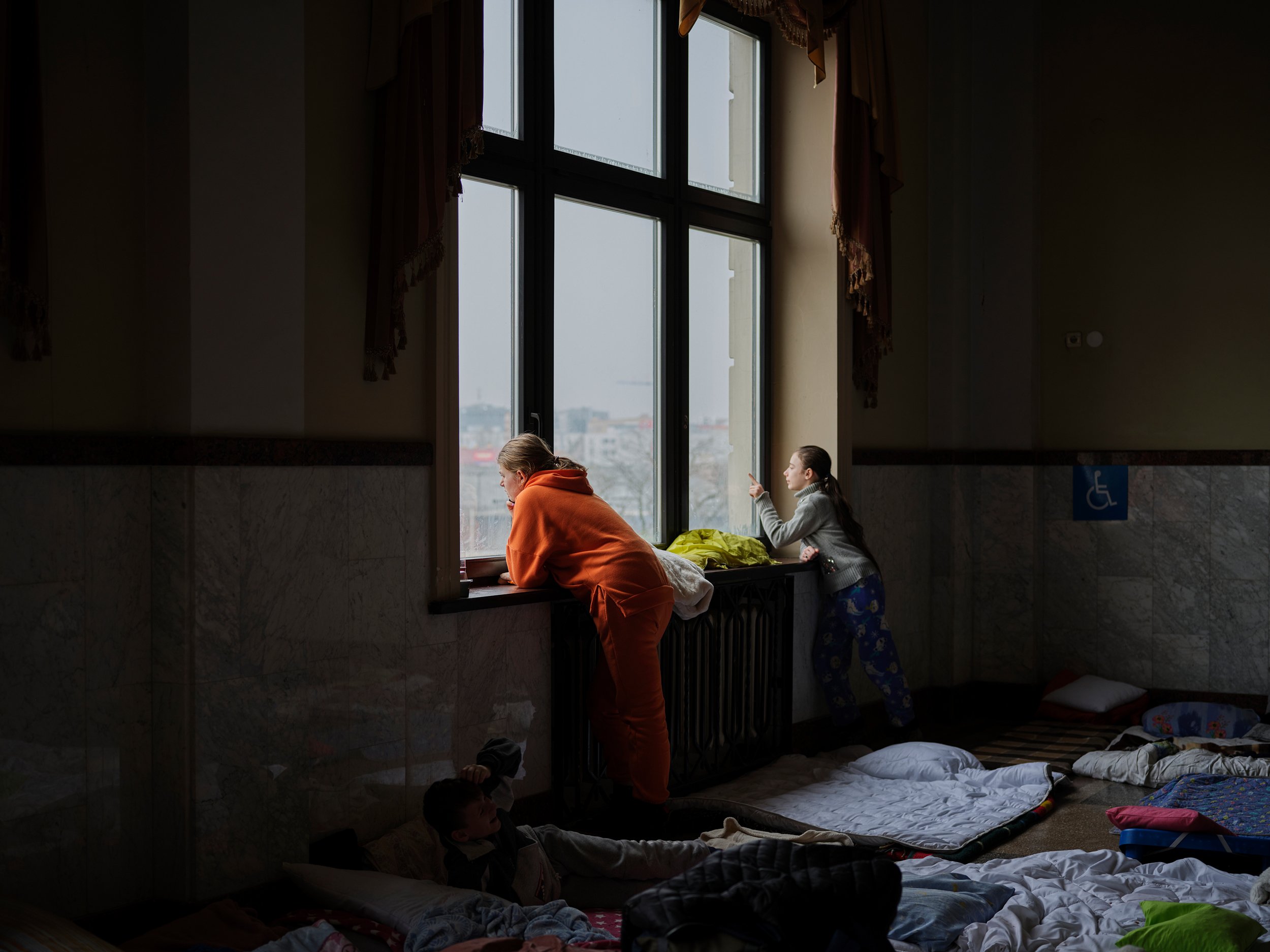 “In such a hectic, sad time, I’m drawn to the quieter moments. This window looked out on thousands of refugees, lining up to wait for a train. Inside, there was a child in the shadows, screaming for his mother. But the girl on the right was just blowing her breath against the window, making hearts on the glass.” 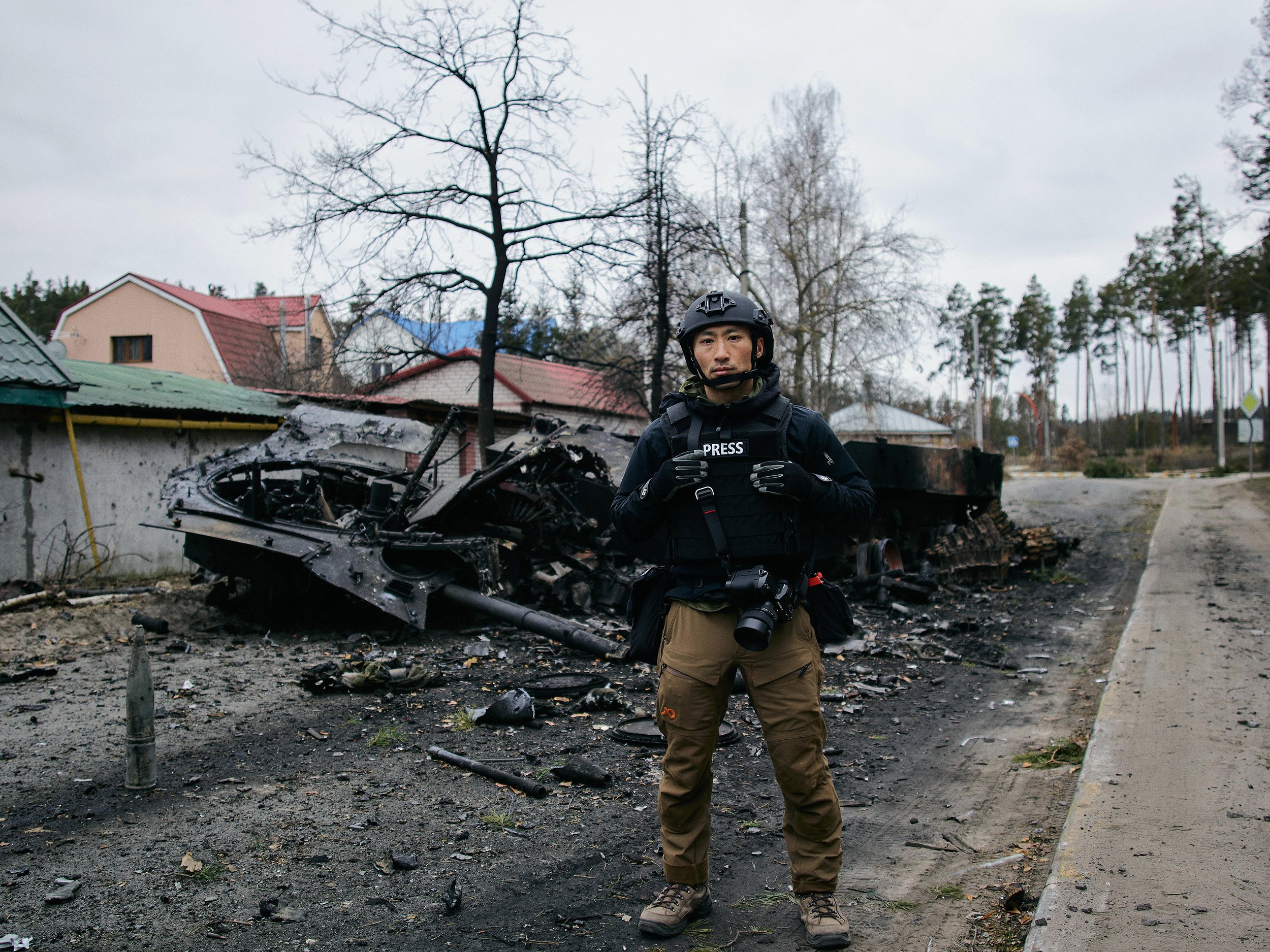 “My photography partner, Zach Lowry, took this photo. I’m in a flak vest and helmet standing in front of a Russian armoured vehicle. A Ukrainian soldier told us it was one of the first Russian vehicles that came into Irpin, but the military destroyed it before it reached the bridge to Kyiv.”

This article appears in print in the May 2022 issue of Maclean’s magazine with the headline, “Days of destruction.” Subscribe to the monthly print magazine here.