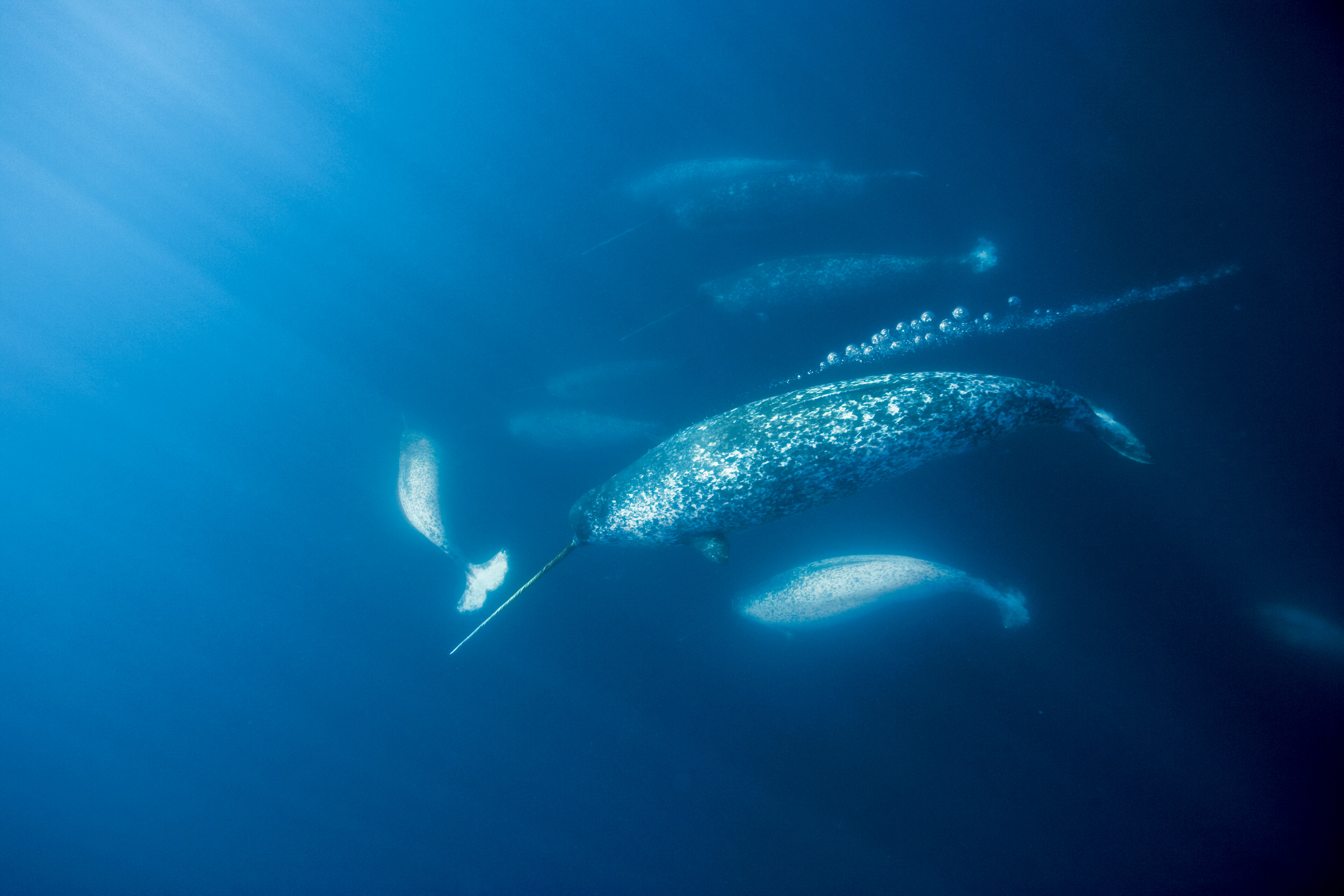 The sound of too much noise

The Arctic narwhal is being threatened by a new enemy: the clamour of passing ships

In all of nature, there is only one creature with a unicorn-like tusk packed with millions of nerve endings. The narwhal whale can use its long, spiralling super-tooth to detect variations in water pressure and temperature and also the concentration of salt in water at varying depths.

The narwhal is able, as well, to survive in the Arctic, subsisting on fish and squid and shrimp, even as ice crusts the sea for nine months every year. In the darkness of winter, it can navigate and find prey underwater by emitting a series of clicks that sound at high frequencies, inaudible to the human ear.

In the Canadian Arctic, where most of the world’s 100,000 or so narwhals spend their summers, the Inuit hunt the narwhal; a family can live off the meat of a single whale for weeks. To them, the creature is almost transcendent. The Inuktitut word for narwhal translates as “the one that points to the sky.”

But for all its powers, the narwhal is vulnerable—to climate change, yes, but also to a related problem: as the Arctic melts and resources there such as oil, iron, gold and uranium become more accessible, large ships are increasingly rumbling in. They’re altering an inordinately quiet soundscape that has, for thousands of years, been insulated almost year-round by a noise-muffling blanket of ice and devoid of crashing waves in winter. Suddenly, narwhals are, like so many patrons in a noisy bar, tasked with communicating amid clamour—and they’re struggling.

The issue is most profound off north Baffin Island, where the Baffinland Iron Mines Corporation started digging in 2014 and then drove an almost sixfold increase in shipping traffic on Tasiujaq, formerly Eclipse Sound, between 2015 and 2019. One of the largest ore extractors in Canada, Baffinland is now planning to double its annual output from six to 12 million tonnes, and also to increase, from 82 to 168, the number of giant ore tankers it’s allowed to send through the sound each year.

Baffinland is eager to step up production, says CEO Brian Penney, because its Mary River Mine, situated near the northern tip of Baffin Island, is “among the richest iron ore deposits in the world.” The product can go straight to steelmakers in Europe. “No concentrating or chemical processing is needed,” says Penney.

Baffinland’s expansion plans are currently under review. A verdict from the minister of northern affairs—Dan Vandal held the post when Parliament dissolved for the election—is expected some time next year.

Suddenly, narwhals are, like so many patrons in a noisy bar, tasked with communicating amid clamour—and they’re struggling.

Already, though, Baffinland’s operations seem to have caused narwhals stress. A 2021 study published in the journal Arctic Science documented a “significant increase” in cortisol levels in the blubber of narwhals on Tasiujaq since Baffinland began shipping there. Meanwhile, the number of narwhals in the sound decreased by nearly half between 2019 and 2020, plummeting from 9,931 to 5,019, according to an environmental review financed by the mining company.

In tiny Pond Inlet, an almost exclusively Inuit hamlet of 1,600, life is changing. “We used to get narwhals right in front of town,” says Eric Ootoovak, until recently the chair of Pond Inlet’s Mittimatalik Hunters and Trappers Organization. “Now we don’t see them here much anymore. And when we catch them, they’re skinny.”

Ootoovak’s group is working closely with the World Wildlife Fund and Oceans North, a Canadian advocacy group, to defend the narwhal. In testimony to the Nunavut Impact Review Board last winter, Ootoovak disparaged Baffinland’s ships. “The wildlife we depend on for food,” he said, “are constantly being harassed by noise.”

Baffinland doesn’t see itself as responsible for the changes on Tasiujaq, however. Megan Lord-Hoyle, the company’s vice-president of sustainable development, says, “Narwhal behavioural responses to shipping have been limited to temporary, localized and reversible effects.” In a separate statement, Baffinland says the reduced narwhal presence on Tasiujaq could be caused by, among other things, the noisy construction of a harbour in Pond Inlet.

MORE: Theses adventurers are on a 7,600-km journey from the top to the bottom of Canada

A leading expert on narwhal acoustics, however, questions this take. Scripps Research Institute oceanographer Joshua Jones, who’s recorded sound from ships and whales on Tasiujaq since 2016, says the recent rise in vessel traffic there is “on par with some of the most rapid increases in shipping on the planet.”

When a ship is within a kilometre of narwhals, Jones says, the animals flee. “And when that happens,” he adds, “they’re not nursing their young. They’re not communicating with one another about where to find food, and they’re potentially not foraging.” Ships up to 100 km away have caused narwhals to deviate from their natural behaviours, Jones says, and the sounds of the vessels overlap in frequency with narwhals’ social sounds. When the sea is rumbling with boat noise, the whales sometimes can’t hear one another.

But what levels of underwater noise crimp narwhal communication and cause behavioural disturbances in Tasiujaq? Jones doesn’t know. “There’s no hearing test for narwhals,” he laments.

Indeed, much is unknown about this sedan-sized, mottled grey whale. Ensconced in its remote frozen world, the narwhal is little studied, and when Jones first began work on his doctoral thesis in 2014, he intended to ask a fundamental question: What is quiet? What does the narwhal’s world sound like, absent ships?

Jones planned, at first, to record the undersea habitat of the whale in the most ship-sparse nook of the Canadian Arctic, Barrow Strait. But Inuit hunters asked him, “Why would you do that? There are people on Eclipse Sound who are really concerned about underwater noises.”

Jones changed course. On Tasiujaq, he worked closely with Pond Inlet hunters. “Nobody knows the narwhal better than the Inuit,” he reasoned. He lived in their homes for a month or so each year, asking them when and where to find narwhals. He enlisted a local hunter, Alex Ootoovak, Eric’s cousin, as a research partner and has spent countless hours on the phone with Alex, negotiating the intricate repair of Scripps-built audio recorders using a hard drive capable of lasting a full year under ice.

Jones’s audio inquiry, which is ongoing, may ultimately answer questions urgent to the Inuit and to whale advocates everywhere: what do narwhals hear? And what acoustic stressors can they endure? He is still refining his answers. But his thesis is finished, and it constitutes Inuit hunters’ best weapon in what will likely be an uphill battle.

Warren Bernauer, a University of Manitoba geographer who’s written extensively about resource extraction in Nunavut, says it’s rare for the federal government to reject mining projects there. “However, it has happened,” he says. The Trudeau government said no to a proposed Nunavut uranium mine in 2016, for instance. Meanwhile, Fisheries and Oceans Canada has significant concerns about the impact that Baffinland’s shipping will have on the narwhal, while the company’s proposed expansion is, Bernauer says, very unpopular in the territory. “I’ve never seen a situation, since Nunavut was created in 1999, where a proposal was so clearly and directly opposed by so many communities and Inuit organizations.”

Baffinland's mining port at Milne Inlet, an arm of Tasiujag, has dramatically increased the shipping traffic in the area (Courtesy of Hark Nijjar/Baffinland)

As it awaits the minister’s decision, Baffinland, which is largely owned by a Houston-based private equity firm, Energy & Minerals Group, is harbouring huge hopes. The Mary River mine site is home to nine ore deposits. So far, Baffinland has touched only Deposit 1. It’s aware, however, that Deposits 1, 2 and 3 combine to offer over a billion tonnes of iron—more than 150 times what Baffinland is currently shipping each year. And Lord-Hoyle, the company’s sustainability expert, portrays mining this ore as an ecological imperative. Steel made from iron ore, she says in an email to Maclean’s, plays “a key role” in “the process of building wind turbines and other modern green technologies.” Baffinland’s mining, she adds, produces “zero tailings and minimal waste rock. Only minor amounts of water are used as a dust suppressant.”

Eric Ootoovak insists the dust is hardly suppressed. “There’s iron ore dust everywhere now,” he says. “It’s red on the leaves for miles and miles.” The residue, he says, thwarts another Inuit cultural practice—caribou hunting. “The caribou eat the vegetation, and now there are fewer of them.”

Ootoovak and other Inuit have raised their concerns about mining and shipping with Baffinland. But last winter, in his testimony, Ootoovak said the company has regarded Inuit traditional knowledge merely as “stories” and has asked instead for “a file folder full of facts on paper. That’s not how we measure our world or keep track of things.” For the Inuit, Ootoovak says, knowledge abides in stories told by Elders. “They are sharing our secrets of our survival, of how to respect the land and waters and animals so we can continue on in our connection with the world we depend on.”

As he sees it, that world is vanishing, and Baffinland’s expansion would only make it disappear faster. He’s bracing for a bleak future. “I’m pretty sure my three-year-old grandson won’t be able to hunt narwhals,” Ootoovak says. “There won’t be any narwhals left for him to hunt. It breaks my heart.”

This article appears in print in the October 2021 issue of Maclean’s magazine with the headline, “The sound of too much noise.” Subscribe to the monthly print magazine here.