A paparazzo for northern Alberta

Keith Biggins has the name of a porn star and works on an oil rig. He is also taking some of the more compelling photos you will see of the underbelly of the oil and gas economy. His portraits, regularly uploaded on his Instagram account, document the denizens and bystanders of the extraction boom: an escort in her 40s who drives a Lexus; rural teens in a fashion time warp; a window washer exhaling a small ghost after a long drag; a fated Match.com couple in camo; defiant Aboriginal siblings on a reserve; a motley rap group that wished it had more local competition.

The “Aboot” section of Biggins’s blog will tell you he lives in Spirit River, Alta., but it does not tell you that Keith Biggins is not really Keith Biggins. His real name is Chris MacArthur, and he spent years as a fashion photographer in New York and London. His new subjects receive the professional treatment he mastered with the likes of Robert De Niro, Katy Perry and Daniel Radcliffe.

When MacArthur, now 30, left London’s razzle dazzle to work in Alberta’s unforgiving oil patch in 2013, he wondered, “Goddamn, is this really as good of an idea as I thought it was?” As a roughneck on the rigs, he dines on plastic-wrapped hoagies at gas stations. At first, he worked 21 days on, three days off, sometimes from 4 a.m. to 10 p.m., blasting holes in the ground, cleaning out sandy pipes and plugging wells that have surrendered their captive petroleum.

But before long, his peers were calling him “holiday boy” and “days-off MacArthur,” on account of his regular escapes as Keith Biggins to the northern communities around him. MacArthur is actually a respectable roughneck, a “good hand,” but there’s a reason he surrendered bohemia: He wanted to document Canada at the margins.

During his time abroad, he noticed how narrowly foreigners conceived of Canadian imagery. “They think pristine lakes, soaring mountains—Canada as a travel brochure,” he says. “I always thought that if I ever took photos of Canada, they wouldn’t look like that.”

They don’t. The pictures are occasionally seedy but unmistakably earnest. They are authentic in a way MacArthur probably could not have managed without making northern Alberta his home. “I think everyone hears about the oil industry, but I’m interested in the communities that surround where extraction is happening,” he says. 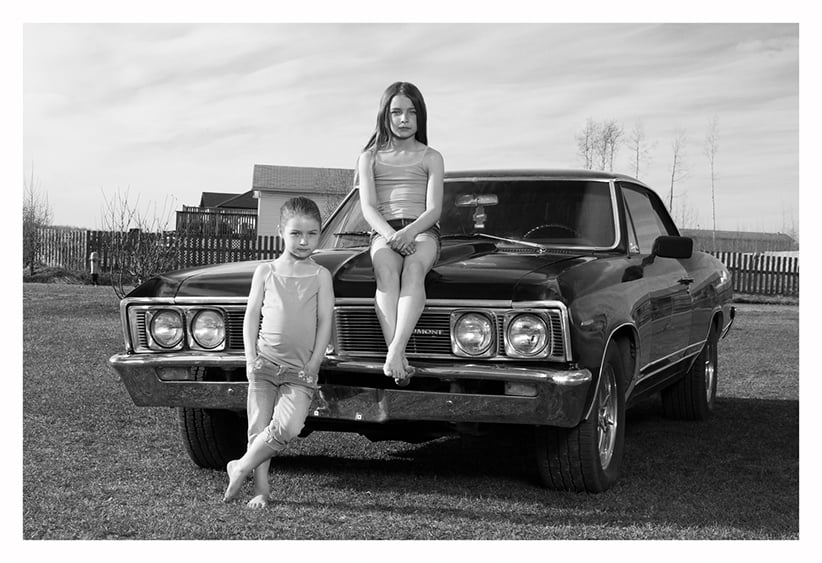 This month, his photos were featured at the immodestly named Truth and Beauty Gallery in Vancouver. “I was taken with his work,” says Peppa Martin, the gallery’s director. “There is a very distinct appearance of warmth and trust and respect that happens between a photographer and a subject that is not possible when you are passing through.”

The exhibit is the culmination of a long and strange journey. MacArthur grew up in Vancouver and studied photography in San Francisco. He paid for art school by saving up money with a stint on oil rigs in Alberta.

His first botched venture into the world of glamour came as a production assistant for a movie with Pamela Anderson. His big break in photography was an internship with Danielle Levitt in New York. On his first day, he helped to photograph the wives of Mafiosi serving jail time. He thought: “This is insane.” Also: This what I want to do.

Two years of frenetic fashion shoots in London followed. Then, one day, he decided it was time for a new adventure. A few months after moving into a fancy high-ceilinged studio, he bought a one-way ticket back to Alberta with a vague plan to become a roughneck artist.

MacArthur’s previous experience on rigs allowed him to blend in, and he kept the photography more or less to himself. “Some people are not hip to it, that he’s cut from a different kind of cloth,” says Neal Hancock, a fellow rig worker and childhood friend. “I appreciate a guy like Chris showing love to Alberta culture. He humanizes what we do.”

The photos document a Canada most of us will never experience. Yet MacArthur insists his social ambitions are modest. “I’m not a hard-core, perspective-changing kind of guy,” he says. “I’m just this guy who likes to photograph these people and send it into the world.