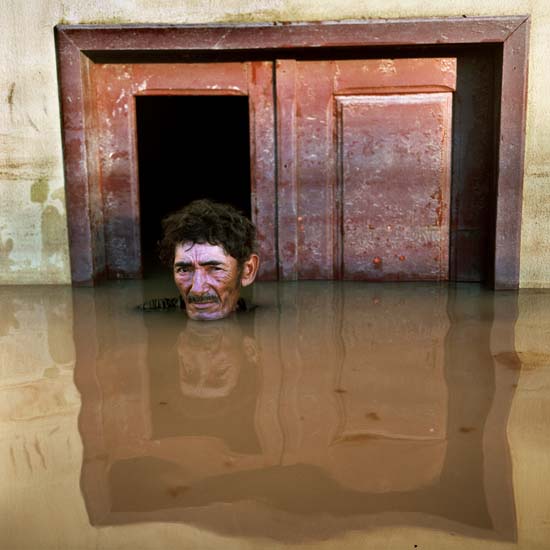 Gideon Mendel describes his photos of flood victims as “submerged portraits.” Rather than depicting people fleeing, he depicts them living amid the water.

Based in London, Mendel began working as a photographer in South Africa during apartheid, an experience he says “defined my lifelong approach to photography and inspired me to seek out ways to engage creatively with social and political issues.”

In this project, called Drowning World, Mendel captures images of floods in countries, rich and poor, that are most affected by flooding. Much of previous climate change photography, he says, “was very white. It was about glaciers and polar bears, and it felt very impersonal.”

To photograph victims in the water, Mendel wears waist-high waders designed for fishing. He’s lost several cameras to the water. His photography tells individual stories. “Generally,” he says, “people are quite keen to show the world what’s happened to them.”

An exhibit of Gideon Mendel’s photos will be on display at the Eli and Edythe Broad Art Museum at Michigan State University, from May 13 to October 16, 2016.