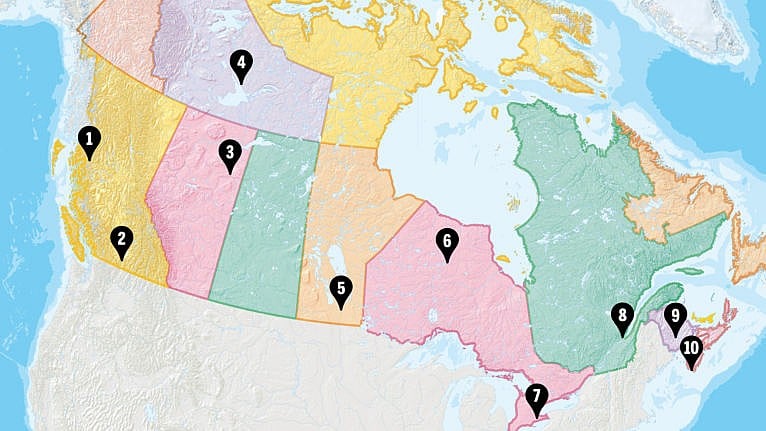 No region is exempt from the challenge of fulfilling Indigenous rights through action—a challenge that First Nations leaders say non-Indigenous governments have been slow or unwilling to face. Here’s a sampling of disputes that could come to a head in 2021.

Amid construction of the Coastal GasLink pipeline in northern B.C. last February, the RCMP’s quashing of Wet’suwet’en anti-pipeline demonstrations sparked protests and rail blockades across the country. In March, the federal government, the province of B.C. and Wet’suwet’en hereditary chiefs negotiated a memorandum of understanding that did not address the pipeline but sought to resolve a decades-long limbo over title, and clarify jurisdiction for future projects. Amid the pandemic, continued pipeline construction and ongoing internal divisions, the details around those talks are still being hammered out. How this non-traditional process shakes out, or doesn’t, will set a major precedent.

A collective of eight First Nations communities, the Syilx/Okanagan Nation, is opposing a major subdivision in B.C.’s wine country. The proposed 320-unit subdivision on the Naramata Bench in Penticton impedes Indigenous territorial rights, chiefs have argued. Farmers are against the development, too, because of the area’s agri-tourism potential. But the land is zoned for urban development and officials have told reporters that the Vancouver-based developer’s plan fits with the city’s long-term goals. Expect a vocal fight when Penticton city council next examines the issue.

Last April, an Alberta Court of Appeal decision quashed an oil sands project north of Fort McMurray for failing to address the interests of the Fort McKay First Nation. Now, the same Indigenous community is entering talks with the proponents of a proposed $22-billion Alberta-Alaska rail link. Those negotiations are worth keeping an eye on. The April decision’s implications may be felt elsewhere—in northern B.C., lawyers plan to raise its arguments on behalf of the Blueberry River First Nations, whose opposition to a natural gas plant is in the courts.

READ: How this Indigenous community enjoyed a rare caribou feast

Could a few houseboats take the national spotlight in 2021? In Dettah, N.W.T., three houseboats and two barges are unwelcome to the Yellowknives Dene First Nation. It posted eviction notices—“first and final” warnings—on the floating domiciles, which were anchored on the nation’s side of Yellowknife Bay in early October. If the houseboat dwellers don’t vacate, legal action could follow. At the very least, the issue will be taken up in the First Nation’s ongoing land claim negotiations with the territory and the feds.

5. How to block an anti-blockade law

Watch the provincial legislature in Winnipeg, where the Protection of Critical Infrastructure Act has been announced—similar to Alberta’s Critical Infrastructure Defence Act, which passed in June, and to a promise from federal Conservative Leader Erin O’Toole. Both bills came in response to rail blockades supporting the Wet’suwet’en in early 2020, actions feared to have major economic impact. Manitoba’s proposed law is already under fire from the Southern Chiefs’ Organization, which has a history of blockading highways in the province’s south to draw attention to Indigenous issues.

Tensions are rising as an infrastructure project moves ahead with the support of one Indigenous community, despite concerns from another. Ontario is proceeding with an Indigenous-led environmental assessment process for a supply road leading to the Ring of Fire mining region, headed by the Webequie First Nation. But the nearby Neskantaga First Nation says it’s unable to meaningfully participate in the process during a pandemic. The community had to evacuate in October due to a shutdown of its precarious water supply, and although Ontario has twice pushed back the deadline for input on the project assessment, Neskantaga says it won’t have enough time.

A deadlock continues in Caledonia, a community west of Toronto, as protesters from the Six Nations of the Grand River demonstrate against a nearby housing development that they claim is on unceded territory. More than two dozen people have been arrested for violating an injunction to allow work on the site, named McKenzie Meadows; over the summer and into the fall of 2020, barricades and occupations were broken up by police. Indigenous leaders in the area are pushing for meetings with provincial and federal counterparts to discuss the dispute.

Bill 61, an economic stimulus law presented to the Quebec national assembly in the summer, was supposed to cut red tape but was criticized as far-reaching and authoritarian. The provincial government backed down. But the slimmed-down version of the infrastructure bill, now before MNAs, is said to run roughshod over existing environmental protections and Indigenous rights. The Assembly of First Nations Quebec-Labrador has warned that Bill 66, as it stood in late September, excluded fundamental rights of First Nations and showed a “complete lack of consideration for the realities of First Nations.”

Six First Nations communities from the Wolastoq territory, along the Saint John River, are suing New Brunswick and Canada for title claim to about half the province. Wolastoqey Nation, as the six communities are collectively known, is not currently seeking compensation or the eviction of New Brunswickers who own land in the area. If their lawsuit is successful, the hope is that existing disputes over logging will be resolved, and the province will consult with them more meaningfully on future resource development projects.

In 2020, the Sipekne’katik First Nation became the first Indigenous community in Nova Scotia to open a self-regulated lobster fishery, saying it intended to sustain the “moderate livelihood” allowed under a Supreme Court ruling. It quickly came into conflict with commercially licensed operations—some said they were concerned about fairness; others turned quickly to violence. Sipekne’katik faced a series of attacks, including the burning of a lobster compound. The RCMP was criticized over its handling of the crisis and federal ministers were drawn in. More Indigenous fisheries have since sprung up. Separately, a coalition of other Mi’kmaw nations has partnered with Premium Brands, a specialty foods giant, to buy behemoth Clearwater Seafoods. Tensions are likely to boil over again.

This article appears in print in the January 2021 issue of Maclean’s magazine with the headline, “Calling out inaction.” Subscribe to the monthly print magazine here.