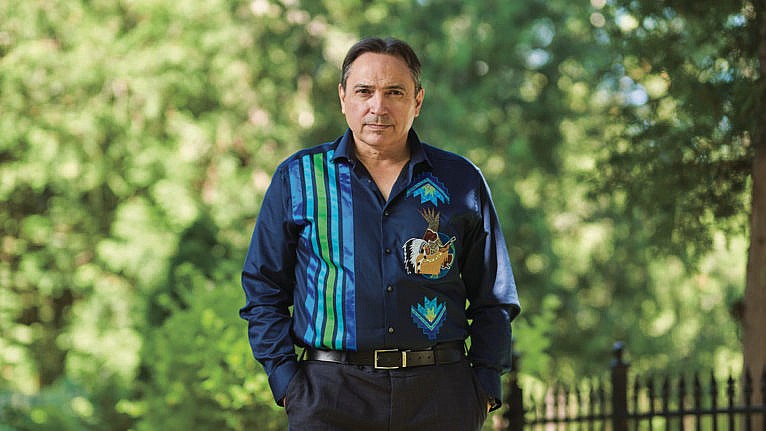 ‘We’ve definitely moved the yardsticks down the field,’ Bellegarde says of his time at the AFN (Photograph by Jessica Deeks)

Perry Bellegarde has been involved in Indigenous politics since 1986. In July, that long run will come to an end: after seven years as national chief of the Assembly of First Nations (AFN), the soft-spoken leader from Qu’Appelle, Sask., will watch his successor be elected from among seven candidates.

What’s his state of mind as that transfer of responsibility approaches? “I feel at peace,” Bellegarde says one bright afternoon during an interview in the backyard of a mutual acquaintance. “We’ve definitely moved the yardsticks down the field.

“Think back seven to 10 years ago, the discourse in Canada about First Nations issues wasn’t there. The opportunities for investments and growth weren’t there. Ten years ago, we didn’t have an Inquiry into Missing and Murdered Indigenous Women and Girls. Nobody was talking about any of these Indigenous concerns in Canada, from MMIW to 40,000 children in foster care. So we moved things.”

READ: ‘At every turn, Canada chooses the path of injustice toward Indigenous peoples’

Bellegarde mentions significant legislation that’s recently passed in Parliament. There’s Bill C-5, which designates a National Day for Truth and Reconciliation each Sept. 30; Bill C-8, which amended the citizenship oath to include a promise to respect Aboriginal and treaty rights; and Bill C-15, which incorporates the United Nations Declaration on the Rights of Indigenous Peoples into Canadian law. Bellegarde’s list included a few more new laws.

As significant as the changing legal framework is a changing fiscal picture for Indigenous Canadians. In 2015, Justin Trudeau’s new government lifted a two per cent cap on annual increases to funding for First Nations programs that had been in place for 19 years. Since then, “we’ve got $40-plus billion over six fiscal years that has been announced. That’s investments in housing and education and water and infrastructure, all the social determinants of health.”

So that’s measurable progress. “But progress doesn’t mean parity,” Bellegarde adds. It’s one of his most often repeated sayings. “I always say, you’re not going to close those socio-economic gaps in three years or five years. I always talk about sixth versus 63rd. In the United Nations Human Development Index, Canada is rated sixth, but if the same indices are applied to our people, we’re 63rd. That doesn’t make sense for our people and it doesn’t make sense for Canada. So therefore you have to make those continued investments in the fastest-growing segment of Canada’s population: young First Nations men and women.”

Bellegarde’s first run for the top job at the AFN, which represents about 900,000 First Nations citizens in Canada, was in 2009. It was a race for the ages, running eight ballots. On six of them, Bellegarde was virtually tied with Shawn Atleo, the British Columbia regional chief. After the eighth ballot, Bellegarde withdrew, making Atleo the new national chief.

As a practical matter, that meant Atleo spent his entire term in office dealing with the Conservative government of Stephen Harper. Bellegarde became national leader in 2014 and has spent most of his term dealing with Justin Trudeau’s Liberals. Did that make a difference in outcomes?

“Of course,” Bellegarde says. “Of course. When I became national chief, I did have some meetings with prime minister Harper and we met on a few issues. [But] you have to have a willing partner to bring about policy and legislative change. That’s what we witnessed with this Liberal government.”

With a federal election likely this year, Bellegarde is careful not to sound too supportive of any party in particular. “As a national chief you have to build relationships with all parties, all party leaders.” Partly because in a minority Parliament like the one Canada has had since 2019, more than one party must support any initiative if it is to pass a Commons vote. Partly because it can be hard to know who’ll win. “When I went to the NDP caucus that year”—in 2015, soon after he became national chief—“they were a government in waiting.” Tom Mulcair, then the NDP leader, “was just so excited you could feel the verve and the energy.” The Liberals’ tiny caucus, not so much. They were in third place in party standings, third place in the polls. A few months later, Justin Trudeau was the Prime Minister. It’s a lesson Bellegarde hasn’t forgotten.

Trudeau is often criticized for missteps and missed opportunities on Indigenous files, such as his decision to oust Jody Wilson-Raybould from the Liberal caucus after her resignation from cabinet, or his missed deadline on eliminating long-term drinking-water advisories on reserves. Bellegarde says his successor must keep the pressure on the next government, but he insists Trudeau deserves considerable credit for delivering on several issues.

“For far too many Indigenous women,” Trudeau said then, “life in Canada includes threats of violence so frequent and severe that Amnesty International has called it ‘a human rights crisis.’ That is the legacy of colonialism in Canada—of a paternalistic Indian Act, of the forced relocation of Inuit and First Nations communities, and a systematic denial of Métis rights and history, of residential schools that separated children as young as five years old from their families, punished them for speaking their own language, and sought to extinguish Indigenous cultures entirely.”

“It was almost like truth-telling,” Bellegarde says now, “acknowledging Canada’s colonial history. How many prime ministers of Canada have done that?”

READ: Mary Simon, at the moment she’s needed most

But Bellegarde says there’s been a shift in public opinion in Canada that no government can take credit for, and none would be wise to resist. “If the discourse with Canadians was not there, it would have been more difficult to do,” he says. “The catalysts for this discourse, what were they?” He lists several. The Truth and Reconciliation Commission’s final report in 2015, with its 94 calls to action. The Inquiry into Missing and Murdered Indigenous Women and Girls with its 203 calls to justice. “And then more recently, 215 little spirits, talking to everybody, waking up everybody”—the news of 215 bodies detected in unmarked graves outside the Kamloops Indian Residential School. (A week after our conversation, hundreds more unmarked graves were found at a former residential school site in Saskatchewan. Bellegarde tweeted that it was “absolutely tragic, but not surprising. I urge all Canadians to stand with First Nations in this extremely difficult and emotional time.”)

“Canadians are waking up and getting it, that this is just not acceptable. And as a First Nations leader, you need that support. You need Canadians pushing their members of Parliament, demanding that action be done.”

What’s next for the AFN? That will be for Bellegarde’s successor to answer, but Bellegarde has more than a few items he’d put on that to-do list. His list starts with the Truth and Reconciliation Commission’s call to action number 58, the demand for an apology from the Pope for the Catholic Church’s role in running residential schools. He says there’s still room for greater use of restorative justice as an alternative to criminal-code remedies, to reduce the huge over-representation of First Nations in Canadian prisons. And the increased spending of the first two Trudeau governments needs to continue, Bellegarde says, to ensure fragile progress isn’t reversed.

For Bellegarde himself, not yet 60? “Getting some rest, to reset and rejuvenate. The rest is in the Creator’s hands.”

This article appears in print in the August 2021 issue of Maclean’s magazine with the headline, “‘Canadians are waking up.’” Subscribe to the monthly print magazine here.