After a decade of cavities, will Calgary put fluoride back in its water supply?

Anti-fluoride activists are fighting again to keep the chemical out of Calgary’s water supply. But there are holes in their argument. 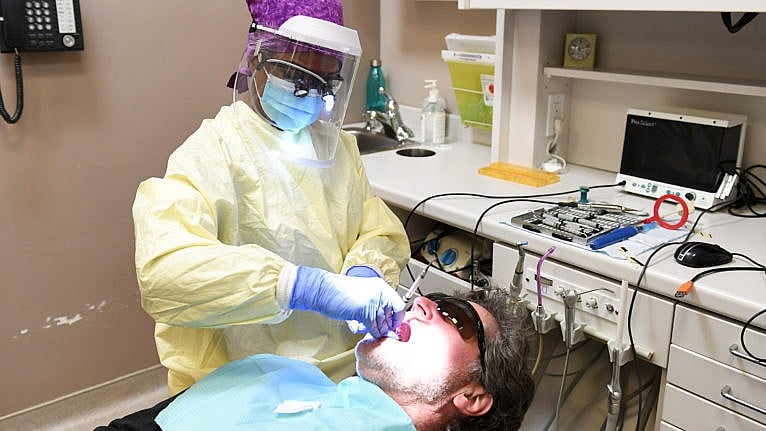 The wisdom of public health authorities has been on everyone’s mind, this year and last. In Calgary this fall, it will be on the ballot. Voters will be asked during October’s civic election whether they want to resume adding fluoride to the water supply. City council had ended the practice a decade ago, undoing voters’ decisions in the fifth (1989) and sixth (1998) plebiscites in the city’s long and winding history with water-borne anti-cavity intervention.

What’s happened since 2012? A study found that within a couple of years of ending fluoridation, decay in children’s baby teeth had risen by 65 per cent compared to 2005, while the increase was only 14 per cent in Edmonton, which continues to fluoridate its water. “We weren’t looking at little tiny cavities that needed to be fixed. They were large cavities, they were destroyed teeth,” says dental hygienist Denise Kokaram, who led a dental program for vulnerable Calgary youth in the wake of fluoridation’s discontinuation.

In 2019, the University of Calgary’s public health institute summarized for council’s benefit the body of science on fluoridation—the abundant evidence that it curbs tooth decay in both children and adults, and the lack of conclusive evidence of the myriad harms that anti-fluoride activists allege, from bone deterioration to brain disease. (Authorities have lowered recommended fluoride levels in water to limit the risk of fluorosis, a condition that mainly causes mild tooth discoloration.)

READ: When bingo night in Inuvik went so very wrong

Something else has changed, too. Over the last year of the COVID-19 pandemic, the public has paid rapt attention to the dictums and counsel of large public health bodies like Health Canada and the U.S. Centers for Disease Control (CDC), and provincial authorities like Alberta Health Services. Those agencies have for decades endorsed adding fluoride to drinking water—the CDC calls it one of public health’s greatest success stories. But when fluoridation is brought before local councils, the word of those establishment bodies is treated as “one side” of a debate, pitted against a collection of contrarian doctors, dentists, scientists and others who lead anti-fluoride groups. It’s an imbalanced debate, where strong opinions are spared the scrutiny faced by scientific consensus that has held for more than 75 years, says Juliet Guichon, an associate professor with the University of Calgary’s community health sciences department and president of Calgary’s pro-fluoride advocacy group (which Kokaram supports).

On council, the anti-fluoride push came from an improbable alliance of conservative councillors, who decry residents losing the choice of what health additives they consume, and progressives, who—while they stoutly defend the scientific consensus on climate change—cast doubt on the science behind fluoridation, or say the city should focus on targeted dental services for in-need populations (instead of, say, doing both).

After a similar debate in 2013, the council of Windsor, Ont., had voted 8-3 in 2013 to stop fluoridating water. Five years later, the local health unit reported that the number of children with tooth decay or needing urgent care had risen by 51 per cent. Council voted 8-3 to resume fluoridation.

In Calgary, the anti-fluoridation leader for the last 22 years has been a semi-retired family doctor going up against the health region, most of medical academia and dental organizations. “The establishment is lying to us about a lot of things about fluoridation,” says Dr. Robert Dickson in an interview. He accuses the pro side of “pulling at heartstrings” by stressing the benefits to poor residents who cannot afford good dental care, and claims fluoride is “damaging poor kids’ brains” with a danger equivalent to that of lead. This appears to be an exaggeration of some controversial studies that have linked ingested fluoride to lower IQ scores in children. There are major scientific reviews under way to clarify the seriousness of this risk, and the fluoride concentrations at which it might occur (in many parts of the world, fluoride naturally occurs in water at higher levels than it does in the stuff from Calgary faucets).

Dickson also talks about well-funded pressure campaigns from Big Pharma companies like Pfizer and Johnson & Johnson—players better known these days for making the vaccines getting society out of pandemic hell. He calls the anti-fluoridation movement “a big tent—we have pro-vaxxers, we have anti-vaxxers, we have neutral vaxxers.” His own views on vaccines, he says, are “a whole other topic I choose not to discuss.”

READ: Here’s what you really need to get a COVID vaccine in Ontario

Guichon and other fluoridation proponents complained about Dickson’s forays into public health to the College of Physicians and Surgeons of Alberta. The body initially dismissed the complaint but wrote to Dickson that, under Canada’s code of ethics for doctors, “you are required to indicate when an opinion presented in public is contrary to generally held opinion.” Dickson complied for a while, then stopped using the disclaimer. Subsequent appeals by Guichon’s group prompted the college to launch an investigation, which the family doctor has asked courts to block. The complaint certainly hasn’t inhibited his anti-fluoride advocacy in the run-up to Calgary’s next plebiscite.

Dr. Richard Musto was a high-ranking Calgary public health officer during the 1998 plebiscite, when 55 per cent voted to keep fluoridation, and a decade ago, when council scrapped it. Now retired, he recalls the nasty messages and threats that poured in, discouraging some colleagues from engaging in the fight. He’d faced the public on all manner of other issues, from H1N1 and flu shots to suicide prevention and algae blooms, he says, but was seldom dismissed “as being just a mouthpiece of the government.” That only happened when the subject was fluoride. He’d briefed Calgary council on all manner of issues, but only on fluoride were his motives challenged by elected officials. “Water,” he says, “is a very emotional issue.”

This article appears in print in the May 2021 issue of Maclean’s magazine with the headline, “A decade of decay.” Subscribe to the monthly print magazine here.