Amber Bracken is an Edmonton-based photojournalist who works regularly for Maclean’s. Her images from the Standing Rock standoff won numerous awards, including World Press Photo’s Contemporary Issues top prize and POYI’s Issue Reporting Picture Story category. She is shortlisted for the Sony World Photography Award that will be announced on April 20.

Q: You’ve already won pretty much every photography award this season. How is World Press different?

A: World Press definitely adds gravity. It is recognized literally around the world. And beyond that, I think World Press has a history of recognizing work that’s different, maybe a little bit outside the box.

Q: A very wise former editor here once said that all the great photographers have something in common: they’re either very charming or very arrogant. And I can say with total confidence that you are one of the least arrogant people I’ve worked with. Can you speak to how you engage with your subjects when you’re there for these long stretches of time. Is it charm or…?

A: Thank you for not calling me arrogant (laughs). I try and approach people with humility. I was told very early when I was in newspapers that people are just people, regardless of their standing. So I always try to go in quietly and let them tell me what their story is, let them tell me where the boundaries are, let them tell me what I should be paying attention to. In terms of Standing Rock specifically, that’s doubly important with Indigenous communities because they’ve been through so much and they are very aware of the possibility of being misinterpreted or misrepresented.

Q: Why was Standing Rock such an important cause for you?

A: I’d been following these kinds of events in Canada for a while—there have been lots of them where people have physically put themselves in the way of resource extraction or impositions on their land or their title or treaty. But I have never seen it reach quite this scale. Once you started seeing thousands of people pouring in—there were literally hundreds of tribes from all over North America and the world—it just became something that you couldn’t look away from. 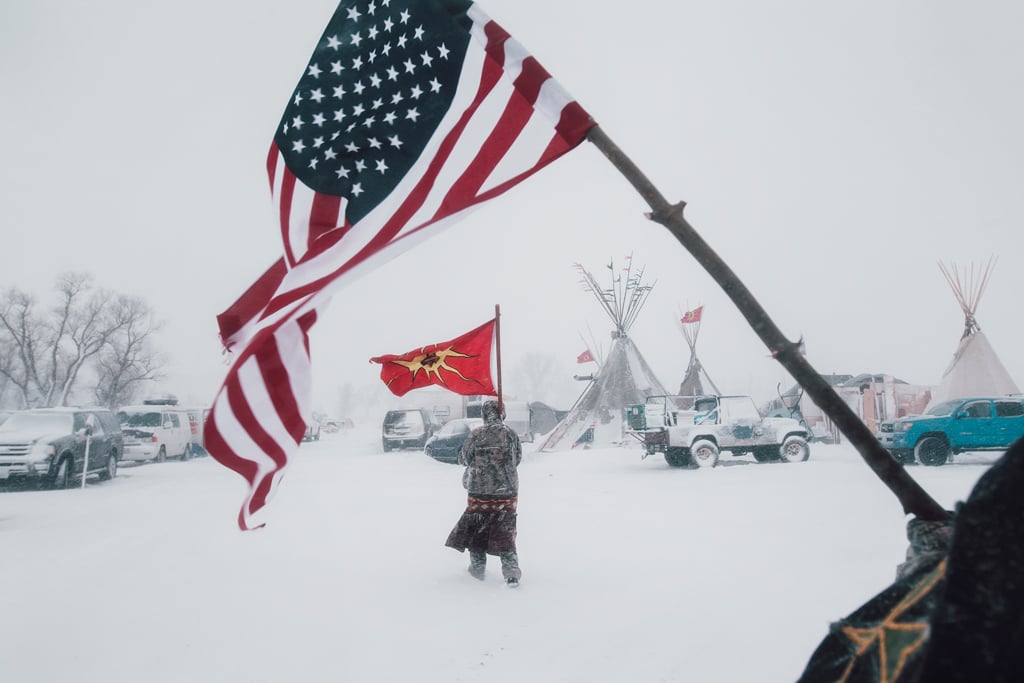 Two nations – Veterans carry an American and a Mohawk Warrior Society flag through the storm. The Mohawk flag came to prominence during the 1990 Canadian Oka Crisis, when the military confronted indigenous people in a major armed conflict for the first time in modern history. Camp is dedicated to stopping the Dakota Access Pipeline (DAPL)

Q: What do you think the photos achieved in terms of documenting that groundswell of attention and support?

A: I think in photojournalism we sometimes get caught up in the idea of what we’re doing with our pictures. Like, trying to find measurable results all the time. I hope my pictures were able to let people see the context behind the specific issue—the heart of the people and the foundation of those camps in prayer.

Q: The pipeline is apparently going ahead under the new U.S. administration. What’s next for you?

A: I’m refocusing on a project that I’m loosely calling Seven Generations. There’s a Cree prophecy that says it would take seven generations for the people to recover their spiritual and cultural identity and health. And so, looking at Indigenous youth through the lens of this prophecy, at this generation, which is actually my generation, and the different ways that they’re struggling and succeeding and becoming that—the future.

Q: You’re Alberta-born and bred, but not from an Indigenous background. How did you become so passionate about Indigenous issues?

A: I think it started fairly naturally. I’m connected to the very traditional photojournalism social justice idea of helping people that are oppressed. And when you look around Canada, there’s no other group that has fought as hard or as long or is still as oppressed as Indigenous people are. Growing up as a white girl in central Alberta, you become aware of the implicit biases and stereotypes that are in people’s understanding of Indigenous communities. I heard a lot of things growing up, even from people that I would consider good people doing good work in their community, widely believed things that have turned out to be wrong in my firsthand experience. So maybe I feel a bit compelled to help rebalance or redress that situation.

Q: Do you see those biases and stereotypes still?

A: Any time you post a story about indigenous people online here, they usually close the comments because they’re so ugly—like really, really ugly. And in my experience spending time with people in those communities—the everyday racism that they face. Like, going shopping, you can’t go into a store without being followed around by somebody assuming that you’re there to steal something. These things are real, and maybe they’re not as bad as they used to be, but they’re real and they affect people every day.

Q: One of the jurors for World Press this year mentioned that only 15.5 per cent of the applicants were female. And that the number has hovered around 15 per cent for the last 10 years. Is this an issue for you?

A: I don’t know why we’re still talking about the absence of women and not doing something about it. It’s too much to expect that things will change on their own. We’ve been there, done that, and nothing changes. I think we need to really actively work on this situation. The reality is that people will reproduce themselves. If we continue to have primarily men, it’s going to be primarily men that will continue to populate the industry.

And I’m also interested in seeing other voices, different experiences. Like, I would love to see a lot more indigenous photojournalists. My version of their stories is one thing, but I think that they should be telling their own stories too.

Q: Is that something that you might take on yourself?

A: I’m actually working on a workshop proposal right now. I’d like to look at doing a camera workshop with youth in care who have an interest in photojournalism and help them use that to tell their own story. I think that that would be an amazing way to be able to translate or maybe help to foster some of the change I’d like to see.