Brett Kavanaugh's craven use of women and girls as props

Anne Kingston: Women — mothers, daughters, classmates and friends — have been summoned as virtue shields in a chilling exploitation 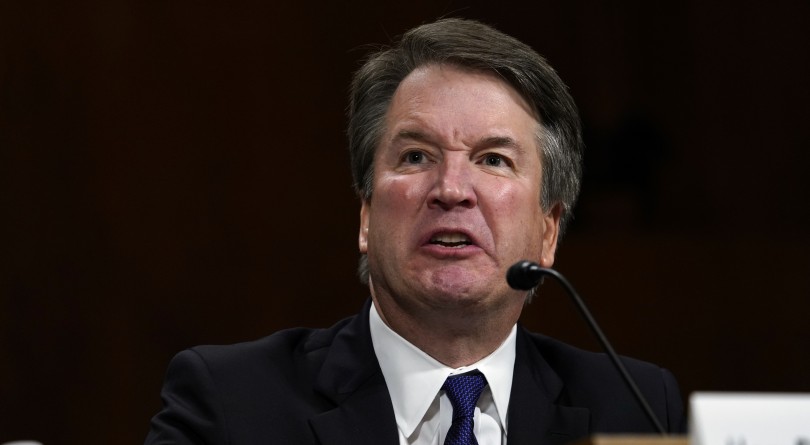 One of the most odious aspects of Brett Kavanaugh’s preordained ascension to the U.S. Supreme Court was the blatant, craven use of women and girls as useful props to buttress his rise during a confirmation hearing that bristled with gender stereotypes and contempt for women. It serves as ominous foreshadowing to his sitting on the bench that makes ultimate decisions over women’s lives, equality and reproductive rights. But it also reveals a shocking snapshot of the current moment, one in which a man who has been credibly accused of sexual assault gets a job promotion while his accuser is the target of mockery by a misogynistic U.S. president and the subject of “Lock her up!” chants by his supporters.

The theatrical deployment of chick-bait officially began with the string of sixth-grade Catholic school girls, members of the basketball team Kavanaugh coaches, enlisted to sit behind him early on at the hearings. By then, the judge had been publicly introduced as a wholesome, Leave it to Beaver kind of pater familias via a weird Washington Post column in July titled “I don’t know Kavanaugh the judge, but Kavanaugh the carpool dad is one great guy,” written by a female friend of the family. Why anyone should care about Kavanaugh’s skill at domestic management, rather than, say, his judicial record, wasn’t evident then. In retrospect, it was a preemptive salvo should the prep school/Yale shit hit the fan.

When it did, women again came to the rescue. Within hours of news that a then-unnamed woman (later identified as Christine Blasey Ford) had accused  Kavanaugh of sexually assaulting her when she was 15 and he a 17-year-old prep school student, Republican Sen. Chuck Grassley, chair of the Senate Judiciary Committee, released  a letter signed by 65 women who knew Kavanaugh in high school and attested that he “behaved honorably and treated women with respect” (how many women supported him after Ford was named is unclear). Again, the move stunk of premeditation. Even women who attended an all-girls’ high school couldn’t summon that kind of support on a dime.

READ MORE: Inside the first year of #MeToo

It was only time before The Wife was trotted out in the time-honoured role of supportive spousal accessory in the face of scandal. Days before Ford’s testimony, Ashely Estes Kavanaugh woodenly sat alongside her husband in a softball Fox News interview. Estes Kavanaugh herself is an accomplished political operative who worked as an assistant and secretary to George W. Bush. On Fox, and during the hearings, the frozen, pained look on her face brought to mind a Stepford Wife in need of programming reboot. “He’s decent, he’s kind, he’s good. I know his heart,” she uttered robotically at one point. When Fox’s Martha MacCallum asked her directly if she believed there should be an FBI investigation, Kavanaugh’s respect for women was on display: he cut his wife off before she could say anything to say he didn’t think so.

Kavanaugh’s kin and childhood friends weren’t the only women summoned as a virtue shield. The GOP brought in Rachel Mitchell, a career prosecutor of sex crimes, initially referred to by Glassey as a “female assistant,”  to question Kavanaugh and Ford “to establish the most fair and respectful treatment of the witnesses possible,” Glassey said, a statement that impugns the senators’ ability to do so. Mitchell, as we know, went mute during Kavanaugh’s unhinged performance. Still, she provided some cover for the 11 white Republican men lest anyone have flashbacks to the similar all-white male panel that grilled Anita Hill in 1991. Her presence might also have stopped a few people from asking how, in the Judiciary Committee’s 202-year history, the GOP hadn’t found a single woman senator to sit on it.

During that testimony, women again came in handy, even if behind the judge’s love of beer and his many named male friends (PJ, “Squi,” Judge, Tobin) and sports prowess. He boasted that his mother was “one of Maryland’s early prosecutors.” He was reduced to dry heaving sobs recounting how his 10-year-old daughter, Liza, told her mother “we should pray for the woman” — the woman being Ford. Little Liza, of course, is only five years younger than Ford was when she says Kavanaugh assaulted her. His putative sensitivity to and respect for women, none with names, was a theme: “One of my closest friends to this day was a woman who was sexually abused,” he said. He added, in what one hopes was a lie: “I was one of the only people she consulted.” He read a supportive text from a nameless female friend he described as “a feminist”: “Deep breaths. You’re a good man, a good man, a good man.” Even if the text was real, it was odd:  the “you’re a good man” reassurance sounded like someone talking Kavanaugh off a ledge. Also, “good men” don’t tend to need to be reminded that’s what they are.

Kavanaugh’s exploitation of ’50s stereotypes continued to the eve of his Senate confirmation in a Wall Street Journal op-ed that conceded he “might have been too emotional” in the hearing: “Yes, I was emotional last Thursday,” he wrote in an Oct. 4: “I was there as a son, husband and dad.” Never mind that he was actually there for a job that would see him adjudicate over the American public, Kavanaugh had a message to deliver: “I testified with five people foremost in my mind: my mom, my dad, my wife, and most of all my daughters.” In other words, his intemperate, disqualifying  performance was just him protecting his family like a papa bear does.

The “good man,” protective dad defence also suggests Kavanaugh has ignored #MeToo, which isn’t surprising. One of its major lessons is that sexual violence usually isn’t committed by strangers or identifiable monsters. It’s often committed by  “good men,” even  famous “good men,” even “America’s Dad.” If Bill Cosby being sent to jail last week taught the world anything, it’s that a man upheld as a model citizen and a role model can one-day be designated a “dangerous sexual predator.”

Equally pernicious is the retrograde thinking underlining the strategic use of women by Kavanaugh and the GOP: the myth of women’s inherent goodness which makes them fungible—and thus interchangeable and disposable—or villainous and “bad” when they don’t play the role. “Ask the moms,” Kavanaugh told Fox News, as if “moms” are morally unassailable and can trusted, just like those 65 signatories. Of course, Christine Blasey Ford is also a “mom.”  No one on the GOP senate judiciary panel had a problem not believing her—or “believed” she was assaulted, but couldn’t reliably remember who had committed a crime that haunted her entire life. And that willing disbelief was the most chilling female exploitation of all.