Canada is likely to exceed the U.S. infection rate in the coming days

The assumption that we would fare better than our neighbours to the south held true through much of the pandemic's first year. Not anymore. 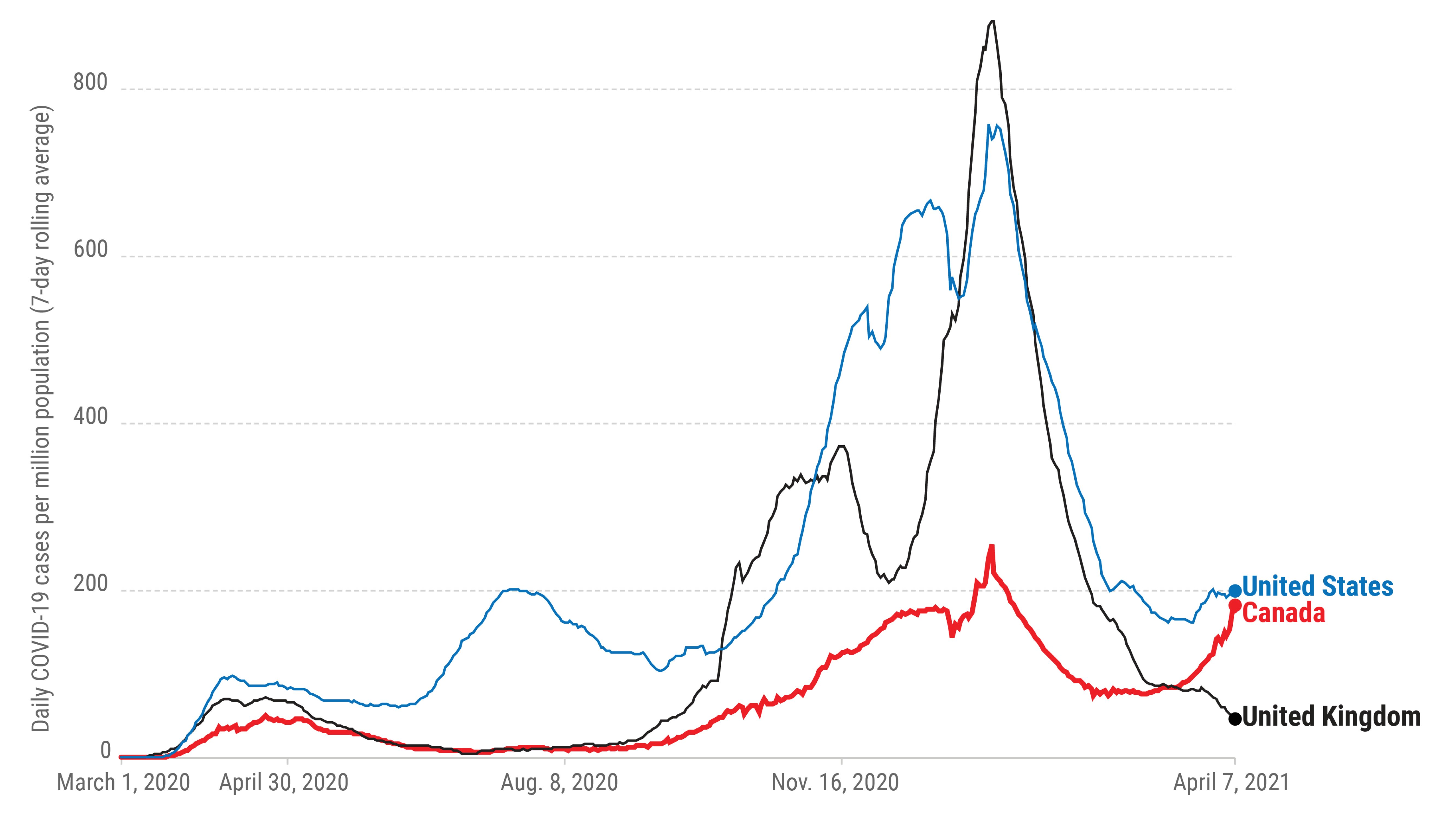 On April 6, Canada’s rate of new COVID-19 cases came as close as its ever been to that of the United States since the beginning of the pandemic, as Canada posted 180.8 cases per million population, while the U.S. posted 195.7 per million population. And our case count is rising so fast—up 28 per cent in the past week alone—that we’re likely to exceed the plateauing U.S. rate in the coming days.

Those numbers come as a jolt. For the past 13 months, Canadians have taken comfort in the idea that our government-funded health care system is decidedly better than the confusing public-private system south of the border, which, while being the most expensive in the world, still leaves around 30 million working age Americans without health insurance. “It’s hard not to beat the U.S. on health care,” says Trevor Tombe, an associate professor of economics at the University of Calgary.

The assumption that Canada would be better at handling a public health crisis was reinforced through much of the pandemic’s first year. COVID-19 rolled across regions of the United States, the country’s health care systems buckled under the stress. More than 31 million Americans have been infected with COVID-19 while nearly 600,000 died; in contrast, Canada, with one ninth the population, has reported 23,000 deaths and one million cases. And so, however bad things got in Canada—including the horrors in our long-term care homes—they never looked as bad as south of the border. In November, Ontario Health Minister Christine Elliott defended the province’s rising case rate by comparing it to Florida’s even worse numbers. On Jan. 8, America’s worst day of the pandemic, the U.S. reported 757.6 new cases of COVID-19 per million population. Canada’s worst came just one day later, when we reported 255.1 cases per million population, both on a seven-day rolling average.

In fact, we were never that superior, at least compared to fellow Commonwealth nations Australia and New Zealand. As John Ibbitson wrote in the Globe and Mail, “Canada’s handling of the pandemic has been average. Middle of the pack. Uninspired. But not awful.”Our fixation on comparing our situation to that south of the border is so all-encompassing that Canada barely noticed when the once stratospherically high rate of new cases in the United Kingdom dropped below ours on March 17.

And let’s not begrudge the Americans their due. Under the leadership of former president Donald Trump, the pandemic lay waste to region after region, and even the country’s nascent vaccination rollout was hobbled by a lack of planning. In contrast, President Joe Biden and his team of health care experts marshalled all the resources of the federal government to vaccinate as many residents as possible. Americans have also benefited from the bounty of a protectionist vaccine policy (no exports are currently allowed): 171 million doses have been put into arms to date, and the country has a vaccination rate of more than four million doses a day.

In contrast, our vaccination efforts were hobbled by slow deliveries of doses in the first quarter of the year. And while overall case and death counts in the U.S. have dropped sharply, ours have risen to the point that many Canadians are once again under stay-at-home orders. Last summer, David Frum wrote two laudatory pieces in The Atlantic about his experience travelling to Canada for an extended stay and then returning to the “state of denial” in the United States. Now, the same magazine’s current piece on our handling of the pandemic is titled, “Canada’s vaccine-rollout problems.”

Tombe has been tracking the Canadian vs. American vaccine performance on Twitter. His latest statistics show that, “at Canada’s current pace of vaccination, the share of people with one or more doses increases by 0.47 per cent per day. The U.S. increases this share by 0.53 per cent per day. For Canada to reach the current U.S. share would take 36 days.” In addition, Tombe points out that the United States, with its abundance of doses, is far ahead of Canada when it comes to giving out second doses. Already 64.4 million Americans fully vaccinated compared to around 750,000 Canadians.

Yet, while cases counts are worsening, the immunization effort in this country is getting better. That current 36-day gap between Canada and the U.S. was 68 days on March 12, according to Tombe.  On April 7, Canada administered 231,000 doses of vaccine, according to data from the COVID-19 Canada Open Data Working Group. That new daily record is roughly the equivalent of two million doses in the United States. “Canada ranks eighth out of 37 OECD countries in terms of the share of the population that is at least partially vaccinated,” Tombe tweeted in his April 7 thread. “In terms of total doses per 100, Canada is 20th.”

Tombe uses nine specific graphics to track our vaccination progress, ranging from a map showing the percentage of population with at least one dose in all states and provinces to a historical chart tracking the number of doses received in Canada vs. the number administered. “There are so many different metrics to evaluate vaccination programs that we should be very wary about people making overarching claims,” he explains, saying that it’s important not just to see what politicians or experts are highlighting, but also what they aren’t. In such a complex, fast-moving environment, no one should take oversimplified answers too seriously, he believes. That surely applies to our rivalry with the United States over our current rate of cases, as well.