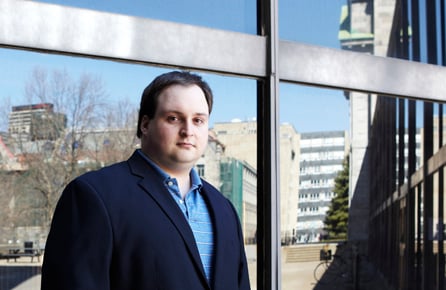 Almost a billion viewers across the planet know him as the Star Wars Kid, but they’ve never heard him speak, until now.

Ghyslain Raza was a normal high-school student in small-town Quebec back in 2002, a shy 14-year-old who liked to make videos. In 2003, classmates posted one of those videos on the Internet without his knowledge–in it, Raza wields a makeshift light saber, clumsily imitating a Star Wars Jedi knight.

The video went viral, and the Trois-Rivières teen became one of the earliest and highest-profile victims of a massive cyberbullying attack, one that played out among classmates and strangers online.

“What I saw was mean. It was violent. People were telling me to commit suicide,” the now-25-year-old recalls.

After a 10-year silence, Raza speaks out for the first time in an exclusive interview with award-winning French-Canadian journalist Jonathan Trudel (L’actualité magazine). The full interview also appears in English in the latest issue of Maclean’s.

Related: Star Wars sucks. There … we said it.

Recorded while Raza was “goofing around” alone at his school’s TV club studio — the group had been working on a Star Wars parody — the video had soon been seen by tens of millions, all the more remarkable in a pre-YouTube world.

Raza said he lost what few friends he had in the fallout, and had to change schools. “In the common room, students climbed onto tabletops to insult me,” he told L’actualité.

It was “a very dark period,” he said. “No matter how hard I tried to ignore people telling me to commit suicide, I couldn’t help but feel worthless, like my life wasn’t worth living.”

Related: Luke … I am your Star Wars-themed PopChips

Raza, now a law-school graduate from McGill, said he was driven to speak out by the recent spate of high-profile cases of cyberbullying, some of which have pushed their victims to commit suicide. If the same situation were to happen today, he said he hopes school authorities would help him through it.

Raza said he hopes talking about his experience will help others to deal with cyberbullying, and urged other young victims to “overcome (their) shame” and seek help.

“You’ll survive. You’ll get through it,” he said. “And you’re not alone. You are surrounded by people who love you.”