25 years after the Montreal massacre, gun control is lax as ever

There’s been progress in the years since the shooting at École Polytechnique. But whatever happened to the Firearms Act? 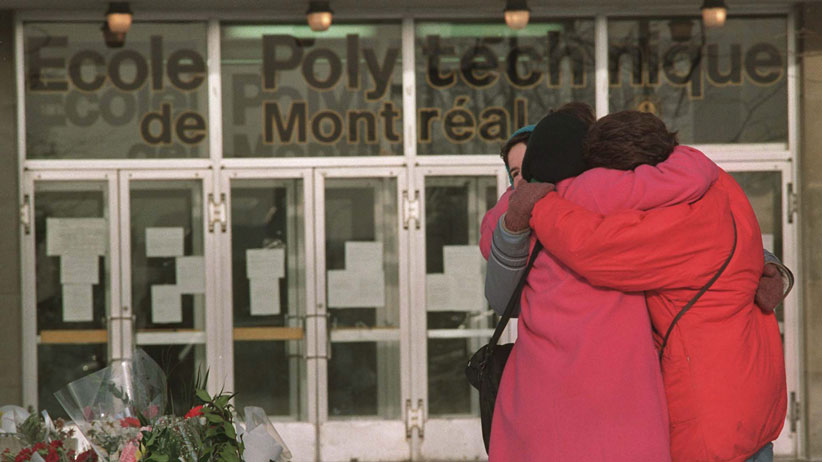 Canada’s Firearms Act was already drenched in symbolism when it came into law in late 1995. Compelling Canada’s gun owners to register their long guns was an affirmation of Canada’s “character as a peace-loving, non-violent nation,” said then justice minister Allan Rock. The law, which imposed fines and up to six months in jail on gun owners who failed to register their weapons, came into being on the six-year anniversary of the Montreal Massacre. On Dec. 6, 1989, Marc Lépine shot and killed 14 women at Université de Montréal’s École Polytechnique, before turning his (legally registered) gun on himself.

Twenty-five years later, the Liberal’s signature law and the long-gun registry it birthed is all but a memory, victim of the Conservative government’s long-held promise to scrap it. Gone, too, are the data collected on Canada’s estimated six million rifles and shotguns. (A court injunction has prevented the destruction of the data pertaining to Quebec.)

Whether the law worked in preventing deaths is a matter of politics. Homicides involving long guns decreased by 41 per cent between 1995 and 2010, according to Statistics Canada—although gun control opponents credit a greying population, not the registry, for this. Still, there is little political will to reinstate it—least of all from the Liberals, who championed the law nearly two decades ago. Justin Trudeau declared the registry “a failure” in 2012, just months after voting against its destruction. “To go back in the process and re-register every gun in the country, that’s not where we’re at,” says Liberal public safety critic Wayne Easter. “There are too many priority issues.”

The Liberal reversal on gun control may have to do with the party’s attempts to woo the rural vote, where gun-control opposition is typically strongest. “[The registry] hurt us electorally, so why give the Conservatives an issue that we don’t need that probably isn’t going to make our streets any safer?” Easter says. The NDP, which also voted to maintain the long-gun registry, today sings a similar tune. “The registry’s gone, the data’s been destroyed, so the registry’s not coming back,” says NDP public safety critic Randall Garrison. Both parties, however, are opposed to Bill C-42, which is now before the House and which critics say would further simplify the licensing process for gun owners.

The long-gun registry was politically fraught for another key reason. A 2005 auditor general’s report says the registry cost $860 million to set up, or about 430 times the Liberal government’s 1995 estimates. Tales of botched registrations and long wait times for permits abounded. Yet law enforcement agencies were overwhelmingly in favour of the registry. In a 2011 letter to then public safety minister Vic Toews, Bill Blair, then the president of the Canadian Association of Chiefs of Police (CACP), called it “invaluable in investigating firearms crimes.” Today, the CACP is also resigned to the loss of the registry. The organization, which represents 1,074 Canadian police leaders, won’t lobby for its return. “We have accepted [the government’s] decision and have moved on,” current CACP president, Clive Weighill, told Maclean’s.

Meanwhile, Lépine’s weapon of choice, the Ruger Mini-14, is easy enough to buy, with or without a permit. The same 2012 law abolishing the long-gun registry also relieved private gun sellers from the obligation of asking to see the buyer’s firearms permit. Until La Presse noted as much this week, several of the guns were available on Lespac, a popular online classifieds site in Quebec. A used Mini-14 cost about $900.